David Earl, a former
Precentor of Limerick who
became Dean of Ferns

Last month, I looked at Warburton’ successor, Canon Frederic Charles Hamilton, who provides an interesting links with both this group of parishes, with the Mariners’ Church in Dún Laoghaire and the Anglican mission agency SPG, now USPG (United Society Partners in the Gospel), of which I am a trustee. (see HERE).

Then, later last month, I told the story of Dean Charles Gray-Stack (1912-1985), one of the last Deans of Ardfert. He was one of my predecessors as Precentor of Limerick, and long before me had been in ministry in the Rathkeale Group of Parish in the 1940s and 1950s. He was also a well-known contributor to the The Irish Times in the 1950s and 1960s (see HERE).

David Earl was one of Charles Gray-Stack’s successors as Precentor of Limerick. He was born in Dublin in 1928, a son of Victor Earl of Grantstown House, Co Waterford, and was educated at Bishop Foy’s School, Waterford, and Trinity College Dublin (BA 1954).

He was appointed the Rector of Rathkeale, Nantenan, Ballingarry, Rathronan and Newcastle West in 1958. Saint David’s Church, Newcastle West, was closed that year, and it was demolished in 1962.

He remained in this group of parishes until 1965, when he became the Rector of Killarney, Aghdoe and Muckross, Co Kerry. In 1977, he was appointed the Precentor of Limerick, and Prebendary of Donaghmore and Ballycahane in the cathedral chapter in 1977.

He remained in this diocese until he was appointed Dean of Saint Edan’s Cathedral, Ferns, in 1979 in succession to the Very Revd Thomas Henry Crampton McFall, who had been dean from 1949 to 1979. He was also Rector of Ferns, Kilbride, Toombe and Ballycarney until he retired in 1994. He was succeeded by the Very Revd Leslie David Arthur Forrest, who was Dean of Ferns in 1995-2011.

In retirement, David Earl lived in Tramore, Co Waterford. He died in Waterford on 31 March 2017. He was survived by his wife Christine (née Lepper), his daughters and son, Alison, Judy, Susan and Jonathan, his sons-in-law Gerald Jephson, James Bourke and Elmer Dool, his daughter-in-law, Karen Cheevers, many grandchildren and a great-grandchild.

Bishop Michael Burrows of Cashel Ferns and Ossory said later that ‘the great throng of friends and former parishioners at the funeral was eloquent evidence of lives touched, enriched and guided by a ministry of great kindness and care for individuals.’

Bishop Burrows added, ‘To visit David was always a tonic … He was fun, wise, and had an incredible memory of people and events.’ 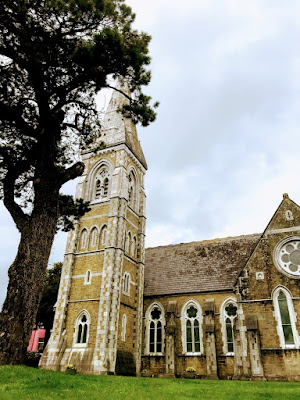 Saint Mary’s Church, Killarney … David Earl was Rector of Killarney in 1965-1979 and Precentor of Limerick in 1977-1979 (Photograph: Patrick Comerford)