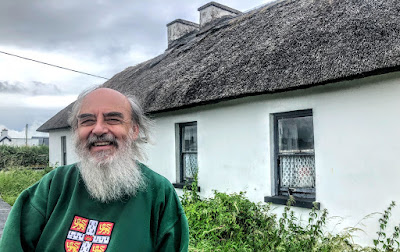 The summer ‘road trip’ continues in this beautiful weather, with visits to coastal towns, resorts and villages. Having revisited a number of Comerford family homes and sites in Kilkenny, including the Langton House in the Butterslip, two of us went in search of Comerford Lodge at Spanish Point, on the west coast of Clare.

The Armada Hotel above the rocks and the beach at Spanish Point (Photograph: Patrick Comerford)

Spanish Point, 3 km west of Miltown Malbay, is a small resort with a beautiful sandy beach and golf course. Its name recalls the Spaniards who were buried here after the wreck of their Armada ships along the coast in 1588. Two ships were wrecked on the reefs at Mutton Island, 3km offshore. More than 1,000 men were drowned, and many of their bodies were carried by the tide to Spanish Point.

The Lord Deputy, William FitzWilliam, had issued a command that all Spanish found in Ireland were to be executed and their ships and treasure seized. It is said those who escaped from their sinking ships and made it safely to land were later executed by Sir Turlough O’Brien of Liscannor and Boethius Clancy, High Sheriff of Clare. They were buried in a mass grave in a place at Spanish Point known locally as Tuama Na Spáinneach, Tomb of the Spaniards.

There was no archaeological evidence for the story until 2015, when a group of historians investigating the location of the wreck of San Marcos claimed to have found a mass grave under Spanish Point. 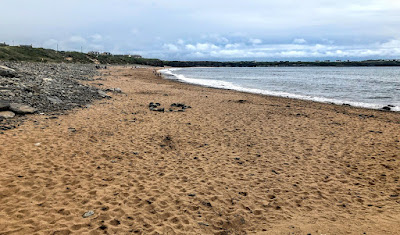 Over 2½ centuries later, the stories of another shipwreck devastated families in north Clare. Henry Comerford (1795-1861), a Clare-born prominent Galway merchant, was the owner of the famine ship The Brig St John that sank at Cohasset off the coast of Massachusetts in October 1849. His brother Isaac Comerford was a crew member.

Over 100 passengers drowned when The Brig St John sank, many of them from the North Clare area. Henry Comerford died at Ballykeale House, Kilfenora, in 1861.

Spanish Point began to develop as a resort before Comerford Lodge was built and before the Comerford sisters ran the post office at Spanish Point. The earliest development began in 1712 when Thomas Morony leased land in West Clare from the Earl of Thomond at an annual rental of £90.

Miltown Malbay was developed as a plan. But he also saw the potential of his beautiful seaside location, encouraging friends to come and build saltwater lodges on sites he provided.

Sone of the remains of the Atlantic Hotel still stand above the shoreline at Spanish Point (Photograph: Patrick Comerford)

Thomas Morony built the Atlantic Hotel and developed his ‘Tepid Baths’ for visitors to enjoy the fresh sea water baths and seaweed baths. The hotel opened in June 1809 under the management of David Anderson. The hotel had beds for 70 guests and stabling for 60 horses, and for a time was celebrated as ‘the largest hotel in the British Isles.’

The seaside resort became popular with members of titled and landed families. The complex also had a large square of stables, and Morony began steeplechase races that soon became the most popular meeting in Munster. He also built houses in Spanish Point for his own sons and daughters near the hotel.

Horse drawn carriages made Spanish Point more accessible, and the Atlantic Hotel was at the centre of early 19th century tourism along the Clare coastline.

The Morony family never managed the hotel directly, but leased it to a succession of proprietors. Then, during the Famine, it was used as an Auxiliary Workhouse. Burdett Morony recovered the hotel in 1852, and was compensated by the Ennistymon Board of Guardians for damage to the building.

The Armada Hotel stands on the site of the Atlantic Hotel (Photograph: Patrick Comerford)

Burdett Moroney reopened the hotel under new management in 1854. When he died in 1870, his widow Eleanor received a life interest in Miltown House. Later, during the Land War and Plan of Campaign in the 1880s, Eleanor Morony clashed with her tenants over land and other issues, ran a controversial ‘Boycott Shop,’ and for a time the hotel was used as a barracks.

When golf came to West Clare in 1892, a nine-hole golf course was added as an amenity for guests who could also play tennis, croquet, and bowling.

The Morony family continued to manage the estate until it was bought by the Congested District Board in 1917-1919, and their Spanish Point property was sold to a property speculator and to tenants.

After the Irish War of Independence and the Irish Free State, many of the traditional guests did not return to the Atlantic Hotel and Spanish Point, and the hotel closed in 1930. For a time, it leased to a religious order as a summer retreat.

Most of the hotel ruin was demolished in the 1940s. The west end continued to function as licensed premises until the mid-1950s, when the licence was transferred to a single-storey corrugated roofed premises and rebranded the Armada Bar. This has since developed into the Armada Hotel. 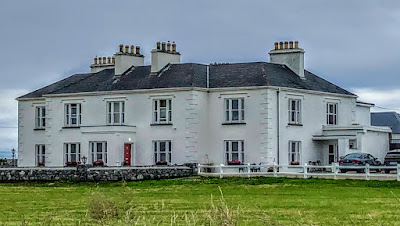 Seaview House was built by Frank Goold Morony ca 1837. The house was sold by the Ellis family in 1929 to the Sisters of Mercy, who opened Saint Joseph’s convent secondary school there. It is now known as Spanish Point House.

Comerford Lodge, less than 1 km north of the Armada Hotel, was the home in 1901 of the sisters Elizabeth and Margaret Comerford, who ran Spanish Point Post Office for many years. Lizzy was then 40 and Margaret as 42, and the widowed Kate Moroney (61) was living with them. In recent years, the house has been used by a number of different families as a summer residence and has been renamed Clare Cottage.

Having visited the former Comerford Lodge, I wanted to visit Delamain Lodge in Kinvara, where Henry Comerford lived, and Ballykeale House, near Kilfenora, where he died in 1861. But they were visits for another day. Meanwhile, two of us went on to visit Christ Church at Spanish Point.

Acknowledgements: I am grateful to the Spanish Point Community Group’s website for material in this posting.