A tale of a county surgeon,
a hesitant librarian and
the inspiring sculptor 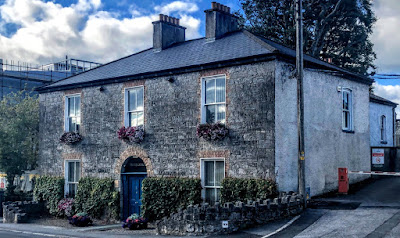 Bellevue House on Mill Road, Ennis, Co Clare … once the home of the County Surgeon, now the headquarters of the County Library (Photograph: Patrick Comerford, 2021)

Bellevue House on Mill Road, Ennis, Co Clare, is a 230-year-old, three-bay two-storey house, now serving as the headquarters of Clare County Library. The house is interesting historically and architecturally, but is also interesting because of its modern sculptures by Rachel Joynt.

Bellevue House was built in 1780, and its architectural features include the timber sliding sash windows with brick dressings at the openings, and the timber panelled door flanked by pilasters with a moulded cornice and a fanlight with wrought-iron decorative detail above.

The low castellated coursed stone wall is a later addition to the site.

Ennis was the first town to adopt the 1855 Public Library (Ireland) Act at a public meeting on 16 October 1855. The Grand Jury provided the site of the old Convict Depot on Jail Street and a new library was designed by J Petty at a cost of £860.

However, the library project was later abandoned, and the building became the Town Hall and later part of the Old Ground Hotel. It was another 75 years before a Public Library Service in Clare was proposed once again in 1930.

Dermot Foley, then a 23-year-old working in the library in Ballsbridge Dublin, was recommended for the post of Librarian in 1931. At first, the council refused to appoint Foley and tried to excuse the delay to his appointment, saying he needed six months to improve his knowledge of the Irish language. But, under the threat of legal action from the Department of Local Government and the possible dissolution of the council, a special meeting of the council was called on 9 July 1931 and Foley took up his post two months later, on 2 September 1931.

When Foley arrived by train in Ennis, he headed to the Court House, where the County Secretary, MJ Carey, called him in and pointed to a sawn-off section of the Council Chamber, saying, ‘There’s your library.’ The walls were shelved to the ceiling, 12 ft high, there was no ladder and the one table was ‘acquired on loan, I was told, from the lunatic asylum.’

A few weeks later, at his first committee meeting, Foley received a parcel with a tin box with two prime 45 bullets and a note saying, ‘Get out of the country, you have a Clareman’s job.’

The County Library Headquarters soon moved from Ennis Courthouse, first to the Clubhouse at Club Bridge and then once again early in 1933 to No 7 Bindon Street. But space was limited, and a large number of books was stored in the District Court Room in the Courthouse. 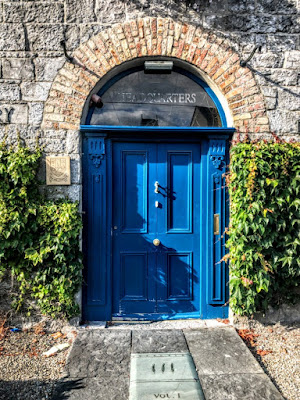 The timber panelled door and the pilasters at Bellevue House (Photograph: Patrick Comerford, 2021)

The headquarters made its final move on 1 July 1943 to existing Bellevue House on Mill Road. This house was built in 1780, and was the residence of the County Surgeon attached to the old County Infirmary, on the site of the present Mid-Western Health Board Clinic.

The adult lending library was housed in a portion of the ground floor and in the early 1950s the hallway was used as a children’s library. The first floor provided a residence for the County Librarian as a residence.

The first custom-built library in Co Clare was opened in Ennis in 1975 and became a landmark in branch library development in Ireland. When the De Valera Library opened, all branch activity ceased at Library Headquarters.

The refurbished Library Headquarters was officially opened in 1994. The library project involved the renovation of Bellevue House, transforming a late 18th century building into a modern library headquarters, while retaining the best of the original features. The official opening was 63 years to the day after Clare’s first County Librarian, Dermot Foley, took up duty.

The building houses acquisitions, cataloguing and departments, schools and part-time branches department, an exhibitions room, a conference and training room, an administrative office and the office of the County Arts Officer. The stock room at the rear can hold 30,000 volumes. 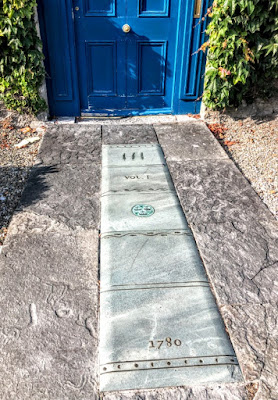 An artistic feature consists of a green limestone slab incorporating a bronze design representing the spine of an old book. To the side, a bronze book is fastened to the exterior stone seat.

‘A Spine Path’ (1994) is the work of the sculptor Rachel Joynt, who has created some prominent Irish public art.

Rachel Joynt was born in Cahersiveen, Co Kerry, in 1966, and she graduated from the National College of Art and Design in Dublin in 1989 with a degree in sculpture.

Her commissions include ‘People’s Island’ (1988), in which brass footprints and bird feet criss-cross a well-traversed pedestrian island near O’Connell Bridge, Dublin. She collaborated with Remco de Fouw in making ‘Perpetual Motion’ (1995), a large sphere with road markings on the Naas dual carriageway.

Her other installations include ‘Selene’ at the Project Art Centre (1993) and ‘Feed’ at the Temple Bar Galleries (1999). Her public artworks include ‘Mothership’ at Dun Laoghaire seafront (1999), ‘Starboard’ at the River Lagan, Belfast (2001), ‘Noah’s Egg’ at the Veterinary Building, UCD (2004), and ‘Love All,’ a bronze globe in Templeogue village, outside Templeogue Tennis Club (2007). 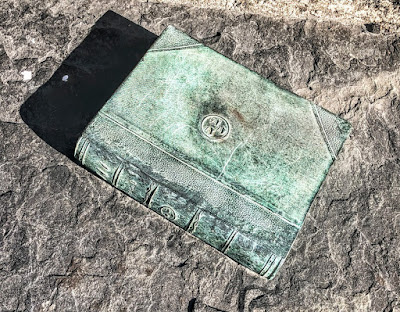