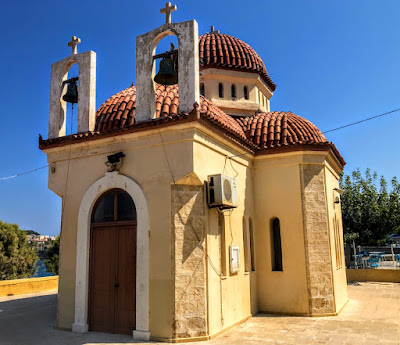 The Church of Saint Nicholas, near the bus station in Rethymnon (Photograph: Patrick Comerford, 2021)

Today is the Feast of Saint Michael and All Angels (29 September 2021). Later this morning, I hope to celebrate the Festal Eucharist in Saint Mary’s Church, Askeaton, Co Limerick.

My photographs this morning (29 September 2021) are from the Church of Saint Nicholas, close to the bus station in Rethymnon. 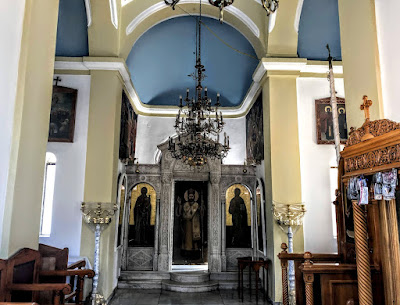 Inside the Church of Saint Nicholas, near the bus station in Rethymnon (Photograph: Patrick Comerford, 2021)

The Church of Saint Nicholas is in a small square formed at the corner of Priskosoridi street and Emmanouil Kefalogianni avenue, the street that runs around the shore of the rocky bay beneath the western slopes of the Venetian Fortezza.

This small chapel or church, close to the bus station, is surrounded by good fish restaurants and tavernas. This is now a suburban part of western Rethymnon, and is slowly becoming a part of the tourist area. But, only a few decades ago and within living memory, this was an area closely associated with fishers and their fishing boats.

Saint Nicholas, as well as being the patron saint of children and the inspiration for Santa Claus, is also the patron saint of sailors, fishermen, ships and sailing, which explains the presence of this modern church dedicated to his name in this part of Rethymnon.

The feast day of Saint Nicholas falls on 6 December, and almost every town in Greece has a church dedicated to him. Saint Nicholas, whose name means ‘Victory of the People,’ was born in Myra in Lycia, now known as Demre, near Antalya on the south coast of present-day Turkey. He had a reputation as a secret giver of gifts, so you can see his links with our Santa Claus today.

As the debate went on, the Council of Nicaea agreed with his views, deciding against Arius and agreeing on the Nicene Creed, which remains the symbol of our faith. Which probably also makes it appropriate that this church is close to the Church of Saint Constantine and Saint Helen, which I described yesterday. 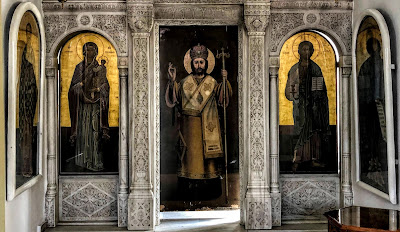 The unusual iconostasis or icon screen in the Church of Saint Nicholas continues into the pillars of the dome (Photograph: Patrick Comerford, 2021) 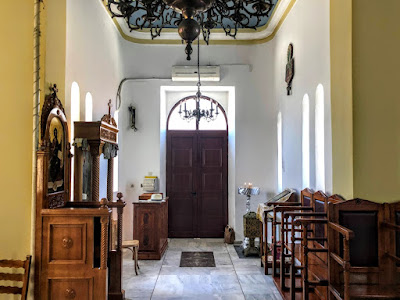 The Prayer in the USPG Prayer Diary today (29 September 2021, Saint Michael and All Angels) invites us to pray:

Let us celebrate the feast of Saint Michael and All Angels. May we strive to do what is good and resist earthly temptation. 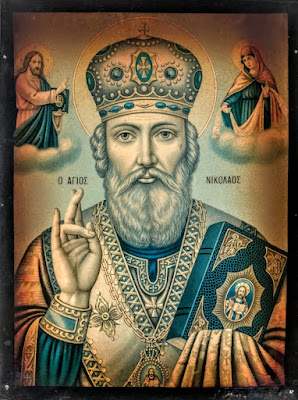 An icon of Saint Nicholas in the church (Photograph: Patrick Comerford, 2021) 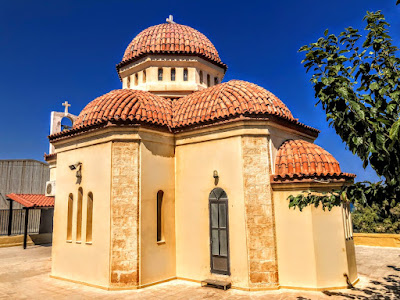 The Church of Saint Nicholas is in an area once closely associated with fishers and their fishing boats (Photograph: Patrick Comerford)