A place of sanctuary
and spiritual rest in
Saint John’s, Lichfield

Welcome to my place of spiritual sanctuary and spiritual rest in Lichfield (Photograph: Patrick Comerford, 2021)

For 50 years now, I have found spiritual sanctuary and spiritual rest in Lichfield in the Chapel of the Hospital of Saint John Baptist without the Barrs. Fifty years ago, by happenchance, I walked into this chapel late on a summer afternoon, and felt filled with the light and love of God.

I was only 19, it was 1971, and it was a foundational moment in my life, changing my values and priorities, challenging my social, political and personal values, offering me a new focus and new directions in life, and eventually leading me along the path to ordination.

Ever since, I have made efforts to return each year to the Chapel in Saint John’s Hospital, to give thanks for the gift of the light and love of God’s in my life. Despite the pandemic restrictions this year and last that interrupted these regular visits, I have returned to this chapel two or three times a year, and it was a special privilege to be invited to preach at the Festal Eucharist on Saint John’s Day, 24 June 2015.

It was natural, then, that the chapel in Saint John’s was the first, and the last, place I visited during last week’s visit to Lichfield. 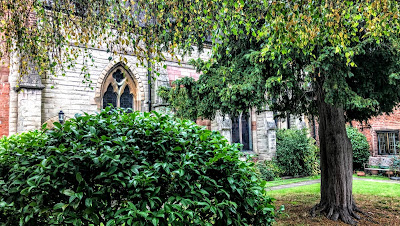 The chapel in Saint John’s is the first, and the last, place I visit when I return to Lichfield (Photograph: Patrick Comerford, 2021)

I was interviewed in the chapel some years ago by local historian David Moore for a series of five short YouTube films, talking about my life, my connections with Lichfield, and the links between Lichfield and the Comberford family. Inspired by this, I recorded a short video clip for a school assembly in a few weeks’ time – I recorded two others outside Lichfield Cathedral and inside the ruins of Coventry Cathedral.

However, last week’s visits, first and last, were about prayer, thankfulness and gratitude.

It is interesting to see, as the years roll by, the changes that take place in Saint John’s. John Piper’s East Window, ‘Christ in Majesty,’ was installed in 1984. It was probably inspired by Graham Sutherland’s large tapestry in Coventry Cathedral, and since its installation it has become an integral part of my own spirituality and prayer life.

Simon Manby’s sculpture of ‘Noah and the Dove’ was commissioned by the trustees in 2006 and stands in the quadrangle. Saint John’s was extended extensively in recent years, and the new almshouses were opened by the Duke of Gloucester on 25 July 2017. 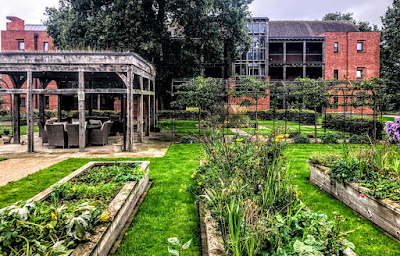 The new almshouses in Saint John’s were opened on 25 July 2017 (Photograph: Patrick Comerford, 2021)

The chapel in Saint John’s has been my place of spiritual sanctuary and spiritual rest in Lichfield for the past half century. But inside the porch of the chapel it was a joy last week to see that this chapel is actively supporting ‘Lichfield City of Sanctuary.’

Lichfield City of Sanctuary says it is ‘Welcoming Everyone to Lichfield with Respect and Kindness’ and states:

‘We believe Lichfield is an open-hearted place where all are welcome and treated with respect and understanding. We work to support local people and organisations to make Lichfield a welcoming and supportive city that provides sanctuary and support to all who need it, especially vulnerable people.’

The first City of Sanctuary was founded in Sheffield in 2005. City of Sanctuary has become a national movement, and is still growing: 110 communities in cities, towns and villages have been recognised as cities of sanctuary, committed to nurturing a culture of welcome and hospitality, celebrating and promoting the contribution of people seeking sanctuary in the country. It is the story of a hundred thousand welcomes.

A small group of Lichfield residents came together in 2019 at a meeting chaired by the Revd Warren Bardsley of the Methodist Church and committed to working towards the recognition of Lichfield as a City of Sanctuary.

‘We come alongside individuals and organisations throughout the district of Lichfield to coordinate welcome and support for those who need it.

‘We challenge visions of Lichfield that exclude any individuals and groups that live and work here.

‘We hold events, exhibitions, campaigns and meetings to engage and inform about the issues that concern us all.’

People who become a Lichfield City of Sanctuary Partner are invited to join the groups, to help shape the future, to support the vision and principles, to take part in events and campaigns, and to provide practical support for marginalised and excluded people and groups. 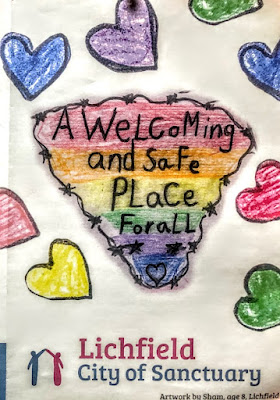 Lichfield City of Sanctuary … part of a poster in the porch of the chapel of Saint John’s Hospital (Photograph: Patrick Comerford, 2021)