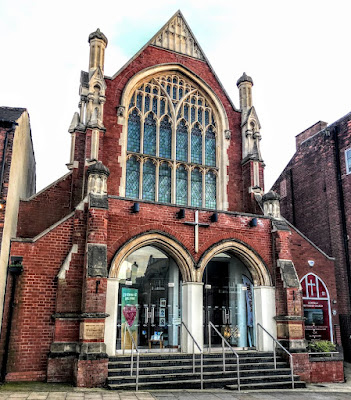 Today is the Fourth Sunday before Advent (31 October 2021), but is being marked in this group of parishes as All Saints’ Sunday. I am presiding and preaching at the Parish Eucharist at 11 a.m. in Saint Mary’s Church, Askeaton, a united service for the Rathkeale and Kilnaughtin Group of Parishes, and later in the afternoon I am taking part in the farewell service for Bishop Kenneth Kearon in Saint Mary’s Cathedral, Limerick.

My theme last week was churches in Lichfield, and this week’s theme is Methodist churches. These two themes are linked this morning (31 October 2021) with my choice of Lichfield Methodist Church on Tamworth Street, Lichfield. 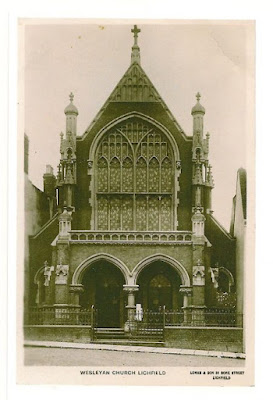 The Wesleyan Methodist Church on Tamworth Street, Lichfield, at its opening in 1892

The Methodist church at the city end of Tamworth Street, at the junction with Lombard Street, has undergone extensive redevelopment in recent years, with the addition of schoolrooms and meeting rooms. This is the home church of the Tamworth and Lichfield Circuit, which includes the Methodist churches in Lichfield, Alrewas Glascote, Shenstone and Tamworth.

Although John Wesley visited Lichfield three times in 1755, 1756 and 1777, he never preached in Lichfield, and the first Methodist chapel in Lichfield was not registered until 1811.

A warehouse at Gallows Wharf was registered in 1811 as places of worship by Joshua Kidger. A chapel was built in Lombard Street in 1813, and was opened in 1814 by Dr Adam Clarke in 1814.

There is evidence of another Wesleyan chapel that opened in 1815 and that in Wade Street in 1815 and that was still in use as late as 1837. During the 1851 Religious Census, the chapel in Lombard Street recorded attendances of 22 in the morning and 41 in the evening, but referred to congregations of 130 in the winter months.

Lichfield was in the Burton upon Trent Circuit until 1886, when the Tamworth and Lichfield Circuit was formed.

A site for a new chapel was bought in 1891. The ‘new’ Lichfield Wesleyan Methodist Church on Tamworth Street was built in the Victorian Gothic ornamental style to designs by Thomas Guest of Birmingham.

The foundation stones were laid on 12 August 1891 by Samuel Haynes, Mayor of Lichfield, and Reginald Stanley (1838-1914) of Nuneaton, a prominent Methodist business figure who owned brickyards, collieries, and an engineering firm. The builder was Edward Williams of Tamworth. The stone-laying ceremony was followed by a tea in the Guildhall.

The church was opened on 20 April 1892 by the President of the Methodist Conference, the Revd Dr Thomas Bowman Stephenson (1839-1912), regarded as ‘the architect of a more socially-minded Methodism’.

This new church replaced the Lombard Street chapel, but that building was not sold until 1921, after Tamworth House next to the new chapel was bought. New Sunday School premises were opened in 1924 and a period of growth led to extensions of the premises in 1972.

Meanwhile, there were Primitive Methodists in Lichfield from 1820 at Greenhill. They registered a schoolroom in Saint Mary’s parish for worship in 1831 and opened their own chapel in George Lane in 1847/1848. The George Lane chapel closed and was sold in 1934, when the members joined the Wesleyan Methodists at Tamworth Street.

In 1826, the Methodist New Connexion registered a barn in Sandford Street that had formerly been used by the Congregationalists. It was replaced in 1833 by a chapel in Queen Street, but this was sold in 1859 when the congregation disbanded.

Major alterations were made to the church on Tamworth Street in 1982, when the sanctuary was relocated at the Tamworth Street end and with new entrance facing Tamworth House. The pews were replaced by chairs from a prison on the Isle of Wight prison. But the loss of the choir stalls also led to the demise of the choir itself.

Meanwhile, a growth in population in Lichfield in this period, particularly with the development of the Boley Park estate, was matched by a growing membership, which reached 348 in 1987.

The church buildings were refurbished in 1998-1999 and again in 2012. The glass doors at the main entrance of the church mean that on a Sunday morning the church is looking out onto Lichfield, and Lichfield is looking into the church at worship … an architecturally perfect way to express the mission of the Church. 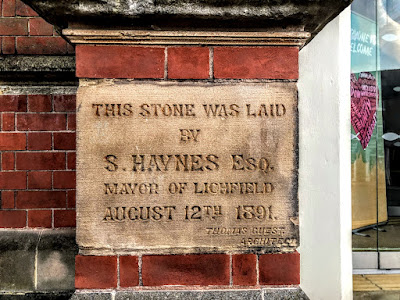 The foundation stone was laid on 12 August 1891 by Samuel Haynes, Mayor of Lichfield (Photograph: Patrick Comerford, 2021) 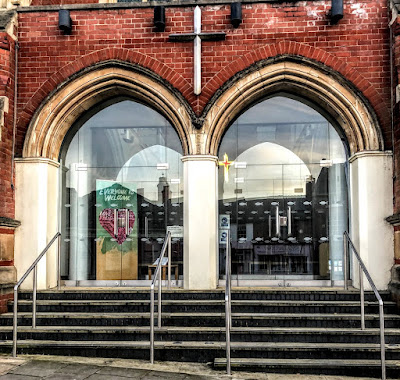 The glass doors at the main entrance of the church mean that on a Sunday morning the church is looking out onto Lichfield, and Lichfield is looking into the church at worship (Photograph: Patrick Comerford, 2021)

The Prayer in the USPG Prayer Diary today (31 October 2021) invites us to pray:

Heavenly Father,
may we love you with all of our hearts, souls and minds.
Let us love each other
and all of creation 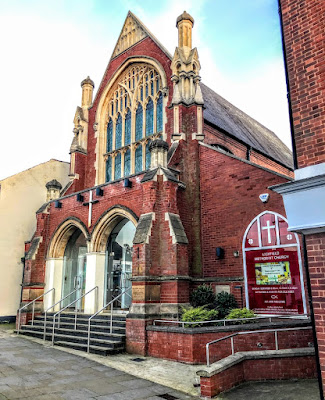 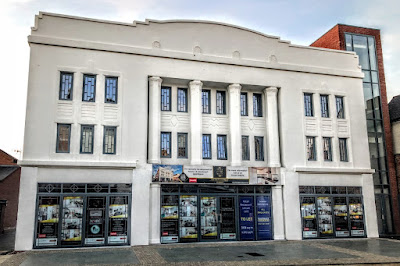