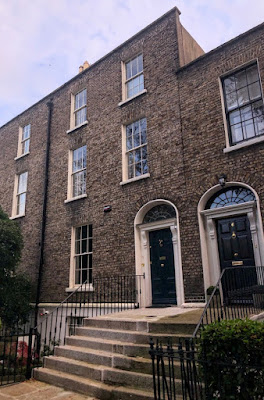 No 7 Ontario Terrace faces the Grand Canal between Ranelagh and Rathmines … my grandmother’s brother, John Lynders, lived there until he died in 1957 (Photograph: Patrick Comerford, 2021)

I was in Dublin last week, just a week after being Venice, where I had stayed in an hotel where I had breakfast each morning and drinks each evening on balconies looking onto the Grand Canal.

A week later, when I arrived in Dublin on the afternoon before a day-long meeting in Christ Church Cathedral, I walked for a stretch along the Grand Canal, from Charlemont Street Bridge almost as far as Sally Bridge.

It was late afternoon, and dusk was beginning to fall. Soon, south Dublin would be enfolded in the evening darkness, so I decided to limit my walk so that along the way I could take some photographs of houses that had some family connections.

My first stop was at Ontario Terrace, which fronts the Grand Canal and bridges the boundary between the suburbs of Ranelagh and Rathmines.

Ontario Terrace was built in 1840, when canals were at the cutting edge of transport, the penny black stamp become the founding mark of public postal service, and Queen Victoria (22) married Prince Albert. Ontario Province was probably given its name to mark the foundation that year of the Province of Canada.

At one time, Ontario Terrace was home to the nationalist writer, John Mitchel, who lived at No 8 while writing for The Nation newspaper. Mitchel returned to Ireland from exile in 1875 and was elected MP for Tipperary.

James Joyce’s parents, John Stanislaus Joyce and May (Murray), lived briefly at No 13 Ontario Terrace after they were married in Rathmines in 1880. Their first-born, John Augustine Joyce, was born there on 23 November 1880, but survived only eight days.

In Ulysses, Joyce has Leopold and Molly Bloom living at No 1 Ontario Terrace in 1897 and 1898 with their pilfering maid, Mary Driscoll, excoriated by Molly for flirting with Leopold and stealing her potatoes and oysters. ‘That slut Mary we had in Ontario Terrace padding out her false bottom to excite him,’ she snaps. In fact, at the time, No 1 was the home a house painter named Behan.

In the early 20th century, Ontario Terrace was a middle-class enclave of the sort that both Bloom and Joyce were familiar with. But in the decades that followed, its fortunes plummeted. Fifty years on, there were plans to fill in the canal and make it into a motorway.

John Lynders had been a sergeant in the Royal Irish Constabulary in the difficult years in the first quarter of the 20th century. He was two years older than my grandmother, and was born in Portane on 11 January 1873. He joined the RIC, became a Sergeant in the RIC and was later a Head Constable. He married Mary Ellen Reardon (1881-1963) from Fermoy, Co Cork.

John Lynders was living at the RIC Barracks, South Main Street, Wexford, when his children were born in 1908 and 1911. The former RIC Barracks later became the Dun Mhuire Hall in Wexford.

John Lynders was a sergeant in Duncannon, Co Wexford, by 1917, and was later transferred from Wexford to Ballymahon, Co Longford (1919-1922), where he was a Head Constable. On 18 August 1920, an IRA group led by Seán Mac Eoin and Seán Connolly, attacked the RIC barracks in Ballymahon and captured rifles, revolvers, grenades and ammunition.

In 1966, Ontario Terrace provided one of the locations for the RTÉ drama series Insurrection, produced to mark the 50th anniversary of the Easter Rising in 1916. As I stood outside his former home last week, I wondered what John Lynders would have thought of that.

Later, No 7 included the offices of Padraig Mulcahy (1920-2012), a chartered quantity surveyor and son of General Richard Mulcahy, first chief of staff of the Irish Free State army and a leader of Fine Gael, and in the 1970s he bought the neighbouring house, No 6, which was derelict. He restored and extended the property, and his family later moved in. 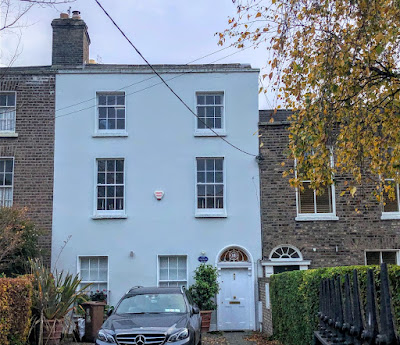 From Ontario Terrace, I continued along the south bank of the Grand Canal, passing Portobello Bridge and Harold’s Cross Bridge, and stopped at Parnell Road, where one Comerford family lived at the turn of the 19th and 20th centuries, at the same time as John Lynders was living in Wexford.

William Comerford died at 18 Parnell Place, Harold’s Cross, on 28 May 1907, but his family continued to live in the house until long after the 1911 census.

The couple later lived at No 60 Kenilworth Square, Rathgar, and their granddaughter, Angela Marks, believes Charles Comerford was in the GPO in O’Connell Street in 1916 and says family tradition tells of him crawling out along the street and swearing to leave Ireland.

The family left Ireland ca 1922, but the memory of the family home in Rathgar was continued in the name ‘Kenilworth’ which he gave to his house on Nore Road in Portishead, near Bristol. Adelaide and Charles Comerford died within seven months of each other in 1953. As I stood outside his former home last week, I wondered what Charles Comerford would have thought of Ireland today. 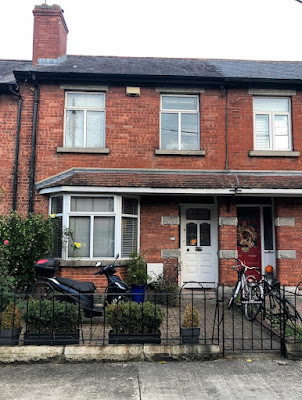 No 9 Arbutus Avenue, one of the two houses I first remember being in as a small child (Photograph: Patrick Comerford, 2021)

My final stopping point in my late afternoon stroll along the south bank of the Grand Canal last week was around the corner from Parnell Road, in Arbutus Avenue

The two houses I first remember being in as a small child are my grandmother’s home in Cappoquin, Co Waterford, and this house at No 9 Arbutus Avenue.

The house on Arbutus Avenue, just like the house in Cappoquin, looks so much smaller today than I remember it, and it is not as pretty either. But, in my mind’s eye, I can still walk around each room in each house, and the house near the Grand Canal is still a comforting place to see, with fading but warm memories of those early childhood days.

I was going to walk on to Rialto Bridge, but dusk and was falling, and I knew, despite any wishful thinking, any photograph I took there could not match Rialto Bridge on the Grand Canal in Venice the previous week. 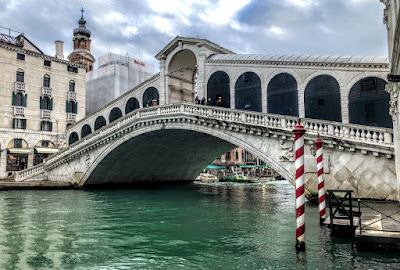