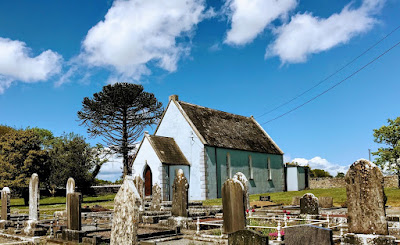 My theme this week is Methodist churches, and my choice of church this morning (5 November 2021) is the Embury and Heck Memorial Methodist Church in Ballingrane, Co Limerick. 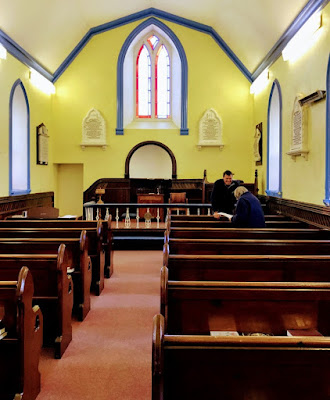 I have preached and taken part in services occasionally in the Embury and Heck Memorial Methodist Church in Ballingrane, and I have always received a warm welcome from me neighbour, the Revd Ruth Watt, and her congregation.

This church is at the heart of the story of the Palatine people in west Limerick but has also played an important part in the story of world Methodism.

In 1709, 110 refugee families arrived in Ireland, fleeing French persecution in the Palatinate in Southern Germany. Many of these families settled on the Southwell estate lands around Rathkeale, at Courtmatrix, Killeheen and Ballingrane.

In the generations that followed, many of their descendants were forced to emigrate. These emigrants included Philip Embury and Barbara Heck, from this part of West Limerick.

Philip Embury was born in Ballingrane in 1729 and converted to Methodism following a religious experience in 1752. A carpenter by trade, he became a Methodist lay preacher and married Margaret Switzer from Rathkeale. They set sail from the Customs House Dock in Limerick in 1760.

His cousin Barbara Ruttle, who was on the same emigrant ship, was born in 1734 and was now married to Paul Heck. In New York, Barbara Heck was dismayed by the spiritual carelessness she found among the people and pleaded with her cousin Philip to preach to them. Philip maintained he could not preach as he had neither church nor congregation. But Barbara responded: ‘Preach in your own home and I will gather a congregation.’

Only five people attended that first gathering. But the congregation grew, and the first Methodist chapel was established in 1768 on the site of the present John Street church, in the heart of the business district.

Philip Heck later moved to Camden Valley, New York, where he continued to work in the linen trade during the week and preached every Sunday. He organised the first Methodist society among Irish emigrants at Ashgrove, near Camden Valley, but died suddenly in 1775 after a mowing accident.

Barbara Heck, her husband and their five children left New York for a farm in Camden but were forced off their land and moved to Montreal where she established a home for Methodism and founded the first Methodist congregation in Canada. She died in 1804 with her Bible in her lap.

Today, Philip Embury and Barbara Heck are counted among the founders of Methodism in North America. A pair of candlesticks that belonged to her are still lit every week in the John Street Church.

The Methodist Church in Ballingrane, which was built in 1766, bears their names. This is the last remaining Methodist church in the Rathkeale area.

John Wesley visited Ballingrane 13 times between 1756 and 1779. Originally, there were three Methodist church in this area, and the congregations were almost exclusively Palatine in origin. The Methodist Church in Ballingrane was built on a site donated by the Heck family, and replaced an earlier, smaller meeting house.

Until 1968, Sunday morning services were held in Rathkeale with evening services in Ballingrane, but the congregations were for the most part one and the same.

The church in Ballingrane retains much of its original form, despite additions, and is enhanced by features such as the coloured glass, lancet, sash windows and the fading limestone plaque, which reads: ‘Embury and Heck Memorial Church 1766, Renovated 1885.’

The church is a solidly-built building with seating for about 90 people. The original doorway was at the opposite end to the present entrance. When the church was restored in 1885, the porch was added and the opening for the older doorway became the present alcove. The entrance was originally from the laneway at the north of the church.

The memorial tablets inside the church include those to Barbara Heck and Philip Embury.

The Revd Dr William Crook (1824-1897), who is also commemorated, brought greetings from the Irish Methodist Conference to the American Methodist Church when it celebrated its centenary in 1866. He is buried in the adjoining cemetery.

Another tablet recalls the Revd Thomas Walsh (1730-1759), who is described as ‘A Saint For Seraphic Piety’ and ‘A Student Of The Divine Word,’ with a knowledge of Scripture that was rarely equalled.

The monument claims ‘He Was The First Irish Evangelist Who Preached The Gospel To His Perishing Fellow - Countrymen, In The Streets, Fairs, And The Markets Throughout The Land In The Irish Language.’ He preached throughout Ireland and England, and John Wesley regarded his ministry as the most fruitful he had ever known. He died at the early age of 29.

A plaque commemorates celebrations in Ballingrane in 1960 marking the bicentenary of the departure of Barbara Heck and Philip Embury from Limerick. This plaque was given by the First Methodist Church in Englewood, New Jersey, in honour of their pastor, the Revd Dr Lowell M Atkinson.

A brass tablet removed from the former Methodist Church in Rathkeale lists the names of members of the congregation who served in World War I. Another tablet is to the memory of George Shier of Robertstown, who lost his life in World War I while trying to save the life of a comrade. He is buried in a war grave in France.

One of the features of the church is a baptismal font made from an original rafter from the kitchen of Barbara Heck’s old home.

Two display cases in the porch include memorabilia, artefacts and photographs from both sides of the Atlantic.

In 1968 the hall, kitchen and cloakrooms were built and further renovations were carried out in 1987 when oil fired central heating was installed throughout the buildings.

The graveyard beside the church was laid out at the end of the 19th century. The headstones include many Palatine family names, including Baker, Bovenizer, Delemage, Doupe, Miller, Raynard, Ruttle, Shier, Sparling, Switzer and Teskey.

Other Methodist ministers buried here include the Revd James Benjamin Gillan, a scholar of Lutheran theology, and the Revd William Bolton Merrick, of Adare. At one time Merrick was stationed in Co Clare and rowed his boat eight miles across the Shannon Estuary to take services in the Methodist Church in Tarbert, Co Kerry.

His hardships and endurance make light of my weekly journeys between churches in West Limerick and North Kerry on Sunday mornings. 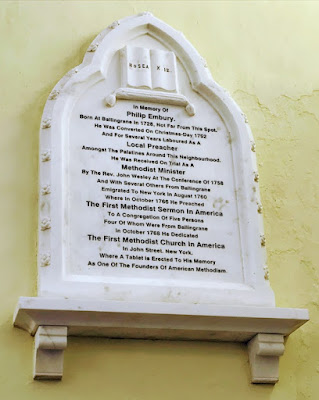 The memorial to Philip Embury in the church in Ballingrane (Photograph: Patrick Comerford)

1 Then Jesus said to the disciples, ‘There was a rich man who had a manager, and charges were brought to him that this man was squandering his property. 2 So he summoned him and said to him, “What is this that I hear about you? Give me an account of your management, because you cannot be my manager any longer.” 3 Then the manager said to himself, “What will I do, now that my master is taking the position away from me? I am not strong enough to dig, and I am ashamed to beg. 4 I have decided what to do so that, when I am dismissed as manager, people may welcome me into their homes.” 5 So, summoning his master’s debtors one by one, he asked the first, “How much do you owe my master?” 6 He answered, “A hundred jugs of olive oil.” He said to him, “Take your bill, sit down quickly, and make it fifty.” 7 Then he asked another, “And how much do you owe?” He replied, “A hundred containers of wheat.” He said to him, “Take your bill and make it eighty.” 8 And his master commended the dishonest manager because he had acted shrewdly; for the children of this age are more shrewd in dealing with their own generation than are the children of light.’ 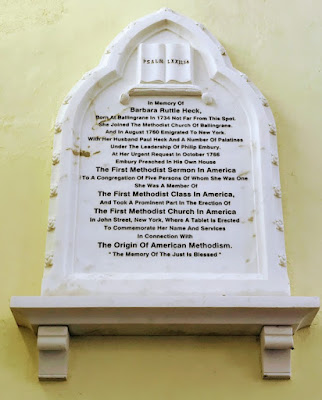 The memorial to Barbara Heck in the church in Ballingrane (Photograph: Patrick Comerford)

The Prayer in the USPG Prayer Diary today (5 November 2021) invites us to pray:

We pray for the work of Hope for the Future and its relationship with USPG. May we continue to travel alongside each other in the pursuit of climate justice. 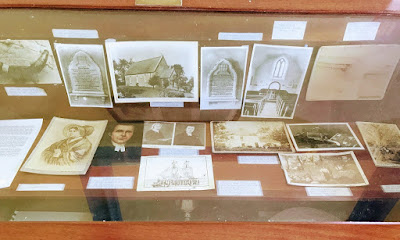 A display cabinet inside the church porch (Photograph: Patrick Comerford) 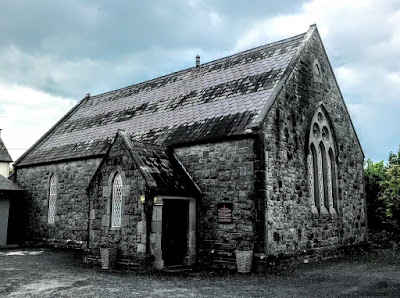 The Methodist Church in Adare was built in 1872-1873, but has a story dating back to 1765 (Photograph: Patrick Comerford)