The miracle of light in
the depths of darkness 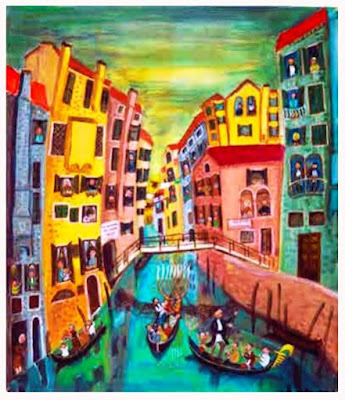 Hanukkah in the Ghetto in Venice, an illustration by Michal Maron in Riccardo Calimani’s ‘500 years of the Venetian Ghetto’

The first night of Hanukkah is on Sunday evening (28 November) and will be marked in synagogues and homes around the world with the lighting of the first candle on the hanukkiah or Hanukkah Menorah late on Sunday afternoon.

Jewish families and communities will be singing songs, playing the dreidel, eating latkes and doughnuts, and lighting the first Hanukkah candle as the sun goes down.

On this Friday evening, as Hanukkah approaches, I am watching the Winter Lecture organised by the Cork Jewish Community in which David Goldberg speaks about his family's journey from Lithuania to Ireland.

When this was shown recently by the Cork Jewish Community, it was an incredibly successful event, with over 60 people in attendance, from countries including Australia, South Africa, Russia and the US. We have recorded the session, and it is now available on our YouTube account and can be viewed HERE.

There are beautiful, joyful illustrations of Hannukah by the artist Michal Maron in two books I bought earlier this month in the ScalaMata Gallery in the Ghetto in Venice, Riccardo Calimani’s 500 years of the Venetian Ghetto and Alon Baker’s The Jewish Festivals and Synagogues around the World.

The ScalaMata Gallery, filled with colourful and captivating paintings, books, cards and bookmarks presenting 500 years of the history and scenes of daily life of the Venetian Ghetto. The displays and exhibitions include illustrated Torah scrolls and paintings by the artist Michal Meron, whose paintings accompany these two books.