Visiting the former Jewish
ghetto and the last
synagogue in Padua 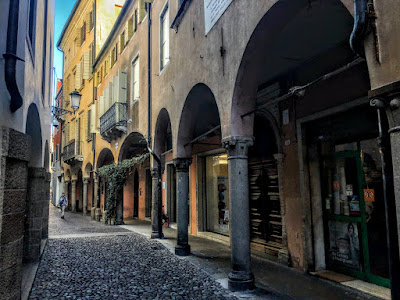 In the heart of the former Ghetto in Padua (Photograph: Patrick Comerford, 2021)

I spent much of Wednesday in the city of Padua, less than an hour’s train journey from Venice, and visited the former Ghetto and the Italian Synagogue, now the only remaining, functioning synagogue in a city that once had many synagogues.

Several synagogues flourished in the university city of Padua from the Renaissance until World War II.

There was a stable Jewish presence in Padua from the late 13th century. When the city was ruled by the Carraresi family (1318-1405), the Jews of Padua lived in relatively peaceful conditions, working mainly as merchants and bankers.

Padua became one of the great centres of mediaeval Judaism in the 14th century, with a celebrated rabbinical academy that attracted students from throughout Europe. Students were also attracted to Padua by its long-standing medical school which was the only one open to Jewish students.

However, when the Venetian Republic captured the city in 1405, conditions gradually worsened for the Jews of Padua. Jews were forced to sell their homes and lands, business and trading conditions became increasingly restrictive, and interest rates were limited to 12%.

Jews could still graduate from the university, but had to pay additional fees. However, from that time on, Padua also became an important centre for Jewish studies, attracting eminent academics.

The Jewish quarter was sacked in 1509 when Padua was captured by German mercenaries in the army of Maximilian of Austria. New pillaging followed when the Venetians retook the city a few months later. Until 1560, the city celebrated the Venetian victory on 17 July with three races, including one race in which Jews were forced to ride on donkeys through the city as they were mocked and jeered by other residents. 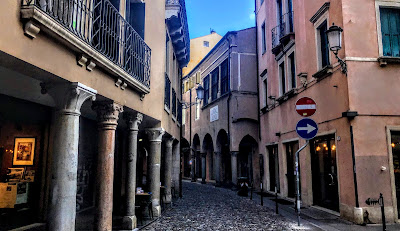 The Venetians confined the Jews of Padua to the ghetto from 1603 (Photograph: Patrick Comerford, 2021)

Venice had the first ghetto in Italy, and the Jews of Padua were confined to a ghetto in the city from 1603. The area neighbouring Piazza delle Erbe was chosen for the ghetto. Jewish families had lived there in large numbers for some time, and the area already Jewish shops and two synagogues.

The ghetto in Padua was in the area of Via San Martino e Solferino, Via delle Piazze and Via dell’Arco. Guarded gates isolated the ghetto at night: two were on what is now Via San Martino e Solferino – one just beyond Via Roma and the other on the corner of Via dei Fabbri; there was a third gate at the beginning of Via dell’Arco, and a fourth on Via delle Piazze. The four gates in and out of the ghetto were crowned with the lion of Saint Mark.

Rents were high, living conditions were cramped and unsanitary, and by 1616, 655 people were living inside the ghetto.

In these cramped conditions, the only way to create more living space was to build up. Buildings became taller, ceilings became lower on each floor, and residential towers were built on streets such as Via dell’Arco.

The main centre of Jewish life was the courtyard of the Scola Todesca or German Synagogue, which had its entrance at 20 Via San Martino e Solferino. A project that was never reached completion planned to extend courtyard into the neighbouring Corte dei Lenguazzi, making it the central square in the ghetto. 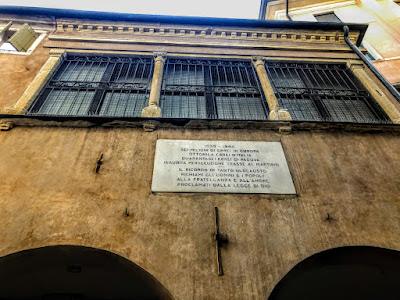 The Holocaust Memorial at the Italian Synagogue in Padua (Photograph: Patrick Comerford, 2021)

When the French captured Padua in 1797, segregation was abolished, and Jews were able to live outside the ghetto. When the city came under Austro-Hungarian rule, Padua did not return to segregation. A rabbinical boarding school was created in Padua in 1829, and it is regarded as the first modern rabbinical school and a model for most important similar institutions.

The Jews of Padua achieved full equality came in 1866 when the city was incorporated into the new Kingdom of Italy.

However, even after the ghetto was abolished, the main institutions of the Jewish community – the synagogues, the rabbinical college and the school – remained in this area.

The Scola Todesca or Great German or Ashkenazic synagogue opened in the Corte Lenguazza in 1525, and became the main synagogue of the city. It was remodelled and embellished in 1683. The synagogue began using the Italian liturgy in the 19th century, when the large Baroque bimah or central platform was removed.

The synagogue was damaged by fire in 1927 and then in 1943 it was torched by local Fascists. Only the magnificent Baroque marble Aron haKodesh escaped the flames. It was dismantled in 1955 and reinstalled in the Yadan Eliahu Synagogue in Tel Aviv.

The former Ashkenazi Synagogue remained in ruins until the end of the 1990s, when it was restored with the help of the local authorities. It now houses the Jewish Heritage Museum of Padua at Via delle Piazze 26, off Piazza delle Erbe, in the Ghetto area. 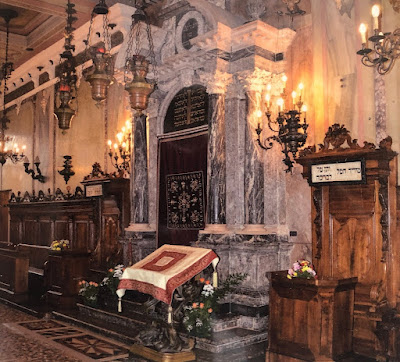 Inside the Italian Synagogue on Via San Martino e Solferino in Padua … an image on the noticeboard outside (Photograph: Patrick Comerford, 2021)

The Italian Synagogue at 9 Via San Martino e Solferino in the historic ghetto was built in 1548, and remains a lasting testimony to the continuing Jewish presence in Padua.

This baroque synagogue is 18 metres by 7 metres. As is usual in Italian synagogues, the Bimah or platform and the Aron haKodesh or Torah Ark are located at opposite sides of the room. What is unusual in Padua is that the Ark and Bimah are placed on long facing walls of the synagogue.

The baroque, 16th century Torah Ark is made from the wood of a plane tree that was struck down by lightning in the University’s botanical garden. It has gilded doors, four Corinthian columns made of black marble with white veining, and carved foliage. The balduchin or canopy over it is in the form of a broken pediment.

The Bimah is reached by a curved flight of eight steps on each side. It features an octagonal balduchin supported by four columns and four pilasters, two projecting form the wall. The Corinthian capitals of the pillars and pilasters are gilded. Elaborate baroque carvings surmount the balduchin.

The ceiling is coffered and painted. The area between the Torah Ark and Bimah is a coffered barrel vault, with large, heavily-carved baroque rosettes in each recess. The traditional women’s gallery is upstairs, but today, the synagogue has a women’s section on the main floor.

The synagogue is in the same building as the offices of the Jewish Community of Padua.

A chimney decorated with a dove, the emblem of the Salom family, can still be seen in the Alberto Toscanelli on Via Arco. This was the headquarters of the former rabbinical academy and the street, with its tall, narrow houses, offers a glimpse of what the ghetto once looked like.

Padua once had seven Jewish cemeteries the edge of the city. The oldest cemetery is close to San Leonardo and dates back to 1384. The tomb of Rabbi Meir Katzenellenbogen (1482-1565) there continues to attract pilgrims.

The cemetery of Via Codalunga includes the grave of Isaac ben Juda Abravanel (1437-1508), a former Minister of Finance for King Alfonse V of Portugal and, before that, for the Kings of Spain. 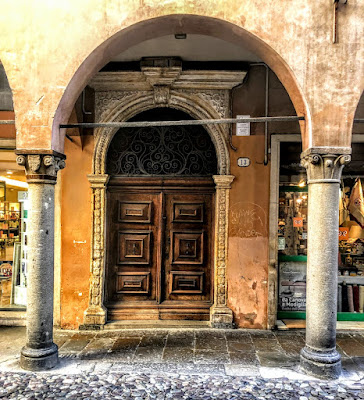 The entrance to the Italian Synagogue on Via San Martino e Solferino (Photograph: Patrick Comerford, 2021)