It looks like a Roman Theatre,
but the Royal Opera House
in Valletta has a curious story 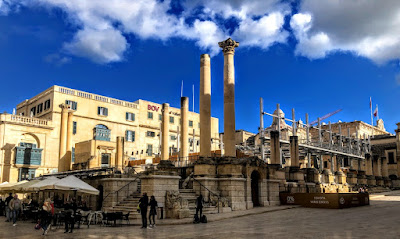 The ruins of the Royal Opera House look like the ruins of a classical theatre or temple (Photograph: Patrick Comerford, 2022)

At first, I thought had come face-to-face with ancient Roman ruins in Valletta, the capital of Malta. The pillars and columns, and the classical looking structure, had me asking whether this was the site of a Roman theatre or temple.

It turns out that site on Valletta’s man street, close to the Maltese Parliament and close to the Osborne Hotel on South Street, where I was staying last week, is the ruins of the Royal Opera House, or the Royal Theatre, a relatively modern, English-style concert hall.

It looks like something from the classical world and seems older than it is. But it serves Valletta as an open-air theatre.

The Royal Opera House, also known as the Royal Theatre (It-Teatru Rjal), was designed by the English architect Edward Middleton Barry (1830-1880), son of Sir Charles Barry, the architect of the Houses of Parliament in Westminster.

Edward Middleton Barry was the architect of Covent Garden Theatre. His classic design plan for the theatre in Valletta was completed by 1861. His original plans had to be altered because he had not taken account of the sloping streets on the sides of the theatre. This resulted in a terrace being added on the side of Strada Reale, now Republic Street, designed by Maltese architects.

Building started in 1862, after the Casa della Giornata was demolished. After four years, the Opera House, with a seating capacity of 1,095 and 200 standing, was ready for the official opening on 9 October 1866.

The theatre was not to last long. On 25 May 1873, a mere six years after its opening, it was struck by fire, and the interior was extensively damaged. The exterior of the theatre was undamaged but the interior stonework was calcified by the intense heat.

The theatre was eventually restored by 1877 and after nearly 4½ years, the theatre reopened on 11 October 1877, with a performance of Verdi’s Aida. In time, it became one of the most beautiful and iconic buildings in Valletta.

During World War II, the theatre received a direct hit from Luftwaffe bombers on the night of Tuesday 7 April 1942. The portico and the auditorium were a heap of stones, the roof a gaping hole of twisted girders. However, the rear end starting half way from the colonnade was left intact.

The remaining structures were levelled down in the late 1950s as a safety precaution. It is German prisoners-of-war in Malta offered to rebuild the theatre in 1946, but the government declined their offer due to trade union pressure. All that remained of the Opera House were the terrace and parts of the columns. 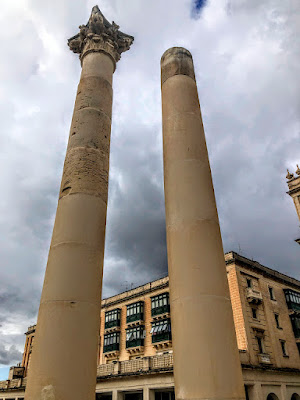 The Royal Opera House was destroyed by German bomns in 1942 (Photograph: Patrick Comerford, 2022)

Although the bombed site was cleared of much of the rubble and all of the remaining decorative sculpture, rebuilding was repeatedly postponed by successive post-war governments in favour of reconstruction projects that were deemed to be more pressing.

Six renowned architects submitted designs for the new theatre in 1953. The plans of Zavellani-Rossi were recommended to the Government, but the project ground to a halt on Labour’s re-election. Although a provision of £280,000 for rebuilding the theatre was made in the 1955-1956 budget, this never happened. By 1957, the project had been shelved and after 1961 all references to the theatre were omitted from development plans.

In the 1980s contact was made with the architect Renzo Piano to design a building on the site and to rehabilitate the entrance to the city. Piano’s plans received government approval in 1990, but work never started.

Then, in 1996, a new Labour Government announced the site would be developed as a commercial and cultural complex, including an underground car park, as Malta's millennium project. In the late 1990s, the Maltese architect Richard England was also commissioned to design a cultural centre. Each time, however, controversies killed off all initiatives.

In 2006, the government announced a proposal to redevelop the site for a dedicated House of Parliament, which by then was located in the former Armoury of the Grandmaster's Palace in Valletta.

Renzo Piano was then approached and started to work on new designs. His proposal was shelved until after the general elections of 2008. The Prime Minister Lawrence Gonzi revived the proposal on 1 December 2008 with a budget of €80 million. Piano dissuaded the Government from building a Parliament on site of the Opera House, instead planning a House of Parliament on present-day Freedom Square and re-modelling the city gate. At the same time, Piano proposed an open-air theatre for the site.

Piano’s development of the theatre was controversial at the time. But the government went ahead with the plans and the open-air theatre was officially opened on 8 August 2013. The theatre was named Pjazza Teatru Rjal after the original structure, meaning Royal Theatre Square. 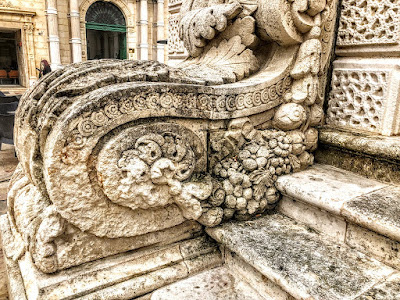 Remains of the original theatre have been conserved in the 2013 development (Photograph: Patrick Comerford, 2022)