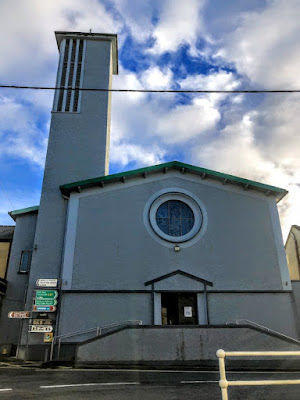 The Church of the Immaculate Conception in Lahinch, Co Clare … designed by McCormick and Corr in the 1950s (Photograph: Patrick Comerford, 2022)

During my recent road trip through Co Clare, I stopped in Lahinch for coffee, a walk on the beach, which features prominently in the recent RTÉ drama series Smother, and to visit the local Roman Catholic parish church, with its interesting stained-glass windows.

The Church of the Immaculate Conception in the centre of Lahinch is similar in design to the Church of Our Lady and Saint Michael in neighbouring Ennistymon, and the two churches form one parish served by the same clergy. The parish is part of the Kilfenora Deanery in the Diocese of Galway, Kilmacduagh and Kilfenora. The present parish priest is Father William Cummins and the curate is Father Des Forde.

An earlier church was built on this site in Lahinch by a Father Keane in the period 1830-1840. That church was extended for the parish priest, Canon McHugh, by Thomas Joseph Cullen in 1923, and a new church was planned in the 1940s, with Ralph Henry Byrne as architect.

However, it was another decade before a new church was built on the site of the original church in Lahinch. 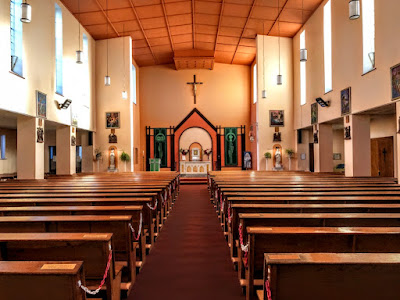 Inside the Church of the Immaculate Conception in Lahinch, Co Clare, facing the liturgical east (Photograph: Patrick Comerford, 2022)

The architects of the Church of our Lady of the Immaculate Conception were the Derry-born architects, William Henry Dunlevy McCormick (1916-1996) and Francis Michael (Frank) Corr, who also designed the new church for Ennistymon in 1947.

Liam McCormick was one of the founders of modern Irish architectural movement and also one of the most important church architects in Northern Ireland. He was responsible for designing 27 church buildings and many commercial and state buildings, including the iconic Met Éireann building in Glasnevin.

McCormick and Corr formed an architectural studio, Corr and McCormick, in 1948, and they designed the new churches in Ennistymon and Lahinch. 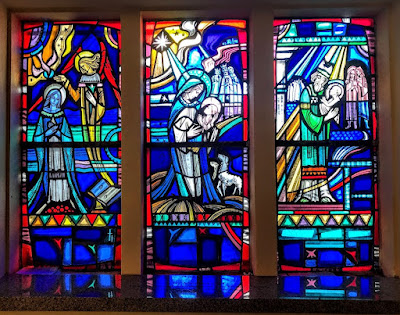 The church in Lahinch was built in 1952-1954 by Farmer Brothers of Dublin, also the contractors for the church in Ennistymon, at a cost of £38,000. The cornerstone was laid in November 1952 and the church was opened in March 1954.

The church is oriented south/north rather than east/west, and faces onto to the Main Street in Lahinch.

Today, the church looks the worse for wear, and has suffered over the past half century. But inside the church has an impressive three-light stained-glass window by George W Walsh, depicting the Annunciation, the Nativity and the Presentation, in memory of the Dixon family, and a circular window by Walsh above the entrance depicting the Virgin Mary as the Immaculate Conception. Both windows date from 1995. 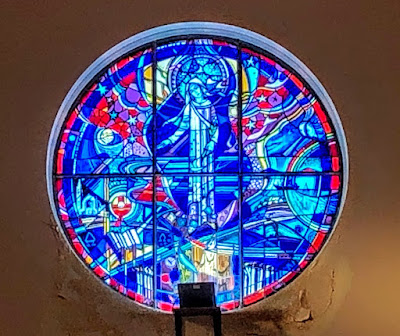 George Walsh’s father, George Stephen Walsh (1911-1988) from Ranelagh, was apprenticed under Harry Clarke and worked in the Harry Clarke Studios. George later served his apprenticeship under his father in Belfast while studying at the Belfast College of Art.

Walsh returned to Ireland from the United States in the early 1960s and he joined the Abbey Stained Glass Studios with Frank Ryan and William Earley. His work there includes windows in the Church of the Guardian Angels, Blackrock, Saint Augustine’s Church, Galway, and the chapel in NUI Galway. 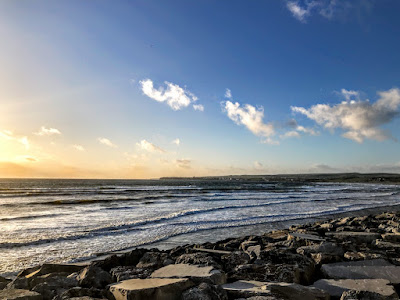 Walking on the beach in Lahinch, Co Clare, after visiting the Church of Church of the Immaculate Conception (Photograph: Patrick Comerford, 2022)