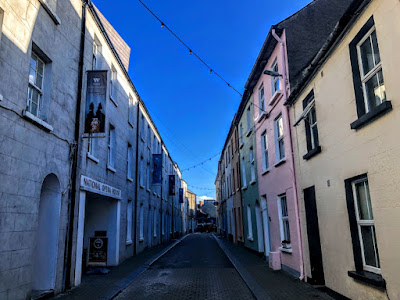 The National Opera House (left) and No 18 High Street (the house in pink on the right) in Wexford (Photograph: Patrick Comerford, 2022)

It is almost 50 years since I moved to Wexford in 1972 and joined the staff of the People Group of Newspapers as a sub-editor.

At the time, I was trying to complete a BSc in Estate Management at Reading University with the support of Jones Lang Wootton. But I was getting greater satisfaction as a freelance journalist, contributing to the Lichfield Mercury, the Rugeley Mercury, the Tamworth Herald, the Kilkenny People and Horse and Hound, among others.

The Wexford People was the first newspaper to offer me a full-time job, and I worked there for the best part of three years, living first on School Street and then on High Street. 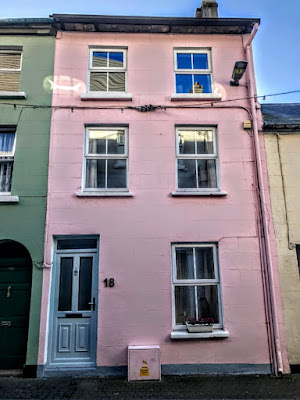 At No 18 High Street, Wexford, I had the whole top floor of the house – all two rooms – to myself (Photograph: Patrick Comerford, 2022)

Living in a flat at No 18 High Street, Wexford, I had the whole top floor of the house – all two rooms – to myself, making me the envy of many of my former schoolfriends who found themselves in cramped ‘digs’ or squeezed into dingy one-room ‘bedsits.’

Wexford, like Lichfield, felt like home to me. My great-grandfather, James Comerford (1817-1902), and his brothers had lived, at different times, on John Street, which runs parallel to High Street, just a stone’s throw from that small flat, and on my paternal grandmother’s side of the family, my great uncle, John Lynders (1873-1957), had lived on South Main Street earlier in the 20th century.

Wexford was kind to me and warmly welcomed me. I quickly became integrated and assimilated into the life of the town and the county. No 18 faced onto the back entrance to the People workshop, so it seemed like I could roll down the stairs and roll into work each morning, and there was no long trek home after a late evening’s work.

Everything I needed, enjoyed and that could enrich me was within easy reach. Further along High Street at the time was the Theatre Royal, and during the Wexford Festival I often went to sleep to the sound of opera rehearsals. On other nights I fell asleep to the chimes and bells of Rowe Street Church.

Around the corner and down the end of Rowe Street on Main Street was Saint Iberius Church, the Church of Ireland parish church, where Canon Eddie Grant was the Rector, the Tower Bar, where I made many friends from all walks of life, and the Corish Memorial Hall, then the hub of trade union life and the Labour Party. 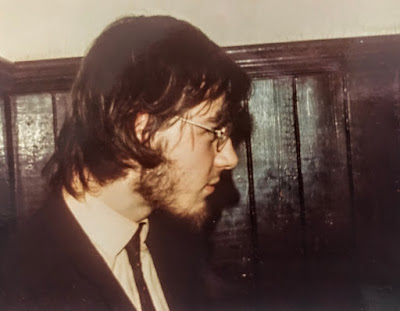 In White’s coffee shop in the mid-1970s, probably planning a poetry reading in the 1970s

I soon became involved in the Labour Party in the 1973 general election and the local election the following year, in the trade union movement as a branch secretary in the National Union of Journalists (NUJ), and in church life, including the committee of the YMCA which served effectively as the parish hall, work parties in the Church of Ireland national school, speaking in a Lenten series in Killane and Killegney group of parishes organised by the late Canon Norman Ruddock, and preaching for the first time ever in the Presbyterian Church on Anne Street.

I was involved in the arts, including poetry readings, folk sessions and art exhibitions with Billy Roche, later to become Wexford’s celebrated playwright, in the local rugby club, Wexford Wanderers, editing local monthly, What’s On In Wexford, commissioned by the Junior Chamber, and had pen-and-ink illustrations published in local magazines.

I was back in Wexford this week, not so much to recover those memories and joys as to say thank you for them and to reaffirm – after half a century – that they are deeply embedded in my self-understanding and my self-awareness.

After lunch in the Ferrycarrig Hotel, looking out onto the estuary of the River Slaney as it flows into the sea at Wexford Harbour, I walked along the Main Street, past the YMCA, the former site of White’s coffee shop, through the Bullring, past Saint Iberius Church, the premises where the Tower Bar and the Corish Memorial Hall once stood, past the former People office, stopping to browse in the book shops, and on down into South Main Street and to the former Dun Mhuire Theatre, once the RIC station where my Great-Uncle John Lynders once lived.

Later in the afternoon, I walked along the Quays and the Crescent, recalling the ‘woodenworks,’ the lost Guillemot and ‘South Station,’ and pennies childishly thrown on the railway line to be squeezed and squashed by trains destined for Rosslare. 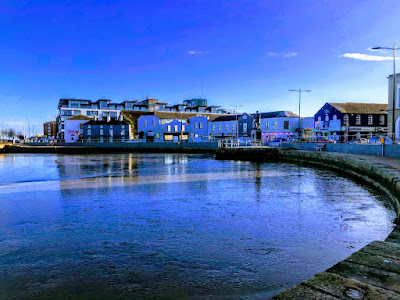 In the side streets and narrow lanes off Main Street, I found the churchyards of the former mediaeval parish churches, Saint Mary’s and Saint Patrick’s, and back into High Street, where I was so happy 50 years ago. It was my own safe castle.

No 18 was sold again some years ago, and has been turned back into a single-unit family home. The house has been ‘prettified’ and painted pink, and now looks charming in the early Spring sunshine of late February.

When I moved to Wexford in the early 1970s, I was told about ‘the narrow streets and proud people.’ The Theatre Royal moved many years ago, and across the narrow street from No 18, the former People printworks have become the National Opera House.

I climbed the stairs to the top floor for afternoon coffee, and a view from the balcony across the town and the harbour, out to Begerin Island and the Wexford Slobs. From the balcony outside the coffee shop, looking down on the roofs of Wexford, I could see my old office where the People editorial team and sub-editors had worked.

Happy memories were rekindled of old colleagues, including Gerry Breen, who died a few weeks ago, Nicky Furlong and Hilary Murphy who both joined me for dinner in Ferrycarrig during another recent visit to Wexford, Phil Murphy, Tony O’Brien, Frank Murphy, Gene Yore, Johnny Roche and the late Eddie O’Keeffe. There were so many others too. 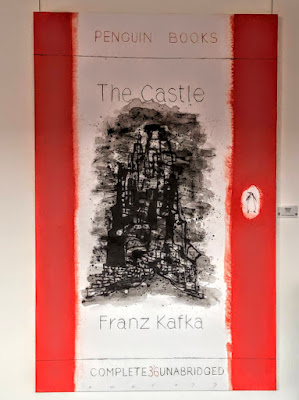 A painting by Neil Shawcrossof the Penguin paperback cover of ‘The Castle’ by Franz Kafka in the National Opera House, Wexford … now part of a tribute to the late Mairead Furlong (Photograph: Patrick Comerford, 2022)

On the way back down the stairs, my eyes were caught by the collection of paintings by Neil Shawcross of Penguin paperback covers, especially – of course – The Castle by Franz Kafka.

The Neil Shawcross bequest of paintings to the Wexford Festival Trust was in recognition of the contribution to the arts over a lifetime by the late Mairead Furlong. I never got to see Nicky on this visit. But I still felt I could pay tributes to the mentors of half a century ago.

The People titles when I worked in Wexford included the Wexford People, the Enniscorthy Guardian, the New Ross Standard, the Gorey Guardian, the Wicklow People and the Bray People. The skills I learned there have their fruits today in my writings and in my blog postings. 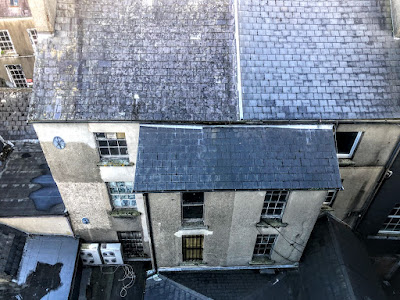 Looking down on my former office in the Wexford People from the balcony at the coffee shop in the National Opera House (Photograph: Patrick Comerford, 2022)