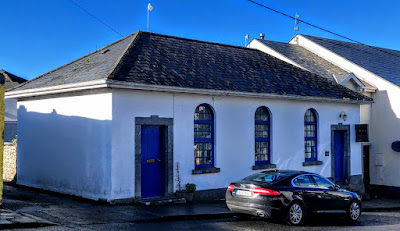 The Old Courthouse in Kinvara, Co Galway, is now home to Kinvara Area Visual Arts (KAVA), run by a committee representing local volunteers. The Georgian building has been used as a performance space as well as a courthouse since the 1860s, and dates back to ca 1820-1840.

The building has been described as ‘an almost vernacular version of the courthouse type.’ It has a symmetrical façade flanked by doors at either end. The tooled limestone surrounds and plinth course add an element of grandeur to what is otherwise quite a simple building.

The poet and songwriter Francis Arthur Fahy (1854-1935), whose songs include ‘Galway Bay,’ was born in Kinvara and produced his first play, The Last of the O’Learys, in the courthouse in Kinvara. It was performed by the local dramatic society in aid of the dependents of Fenian prisoners in 1869.

Fahy was born at Kinvara, the son of Thomas Fahy, who came from the Burren area in Co Clare, and Celia Marlborough from Gort, Co Galway. He wrote ‘Galway Bay’ while living in London, and his other songs include ‘The Bog Road’ and ‘The Ould Plaid Shawl.’

The courthouse was also used to lay out corpses, particularly the bodies of people who died of unnatural causes in the 19th and early 20th centuries. Petty Sessions were held there until 1920, when the original building was almost completely demolished in an attack by a group of local nationalists.

The courthouse was eventually rebuilt and District Court sittings took place there from 1926 until 2008. It also accommodated a community playschool from 1980, which ran alongside the district court sittings. The playschool moved to new purpose-built premises in 2009, and since then the building has been a venue for wide variety of events, including use as a solicitor’s office and housing the Kinvara Youth Project from 2010 to 2015.

The courthouse became the home of KAVA in 2015, with the support of the Kinvara Community Council and the Parish Council. Since opening the courthouse as a community art gallery and art space, KAVA has revitalised the building.

Francis Fahy’s version of ‘Galway Bay’ is hardly as well-known as Arthur Colahan’s song, written in Leicester and popularised by Bing Crosby in 1947. But as I came down the hill from the courthouse to the harbour in Kinvara and looked out onto Galway Bay, I wondered how many of the poor tenants of Kinvara who faced eviction by Henry Comerford after he bought the Kinvara estate from Sir William Gregory (1816-1892) in 1857 ended up in Kinvara Courthouse.

Looking out onto Galway Bay from the harbour in Kinvara (Photograph: Patrick Comerford, 2022)

It is an interesting building with a lot of history. Ownership is a real mystery sine apparently the caretaker I think in the 60s willed it to the community held in trust by the diocese. If the lady actually owned it is a mystery.