With Giotto and Dante
in Padua, a city with
an old university and
the legacy of a ghetto 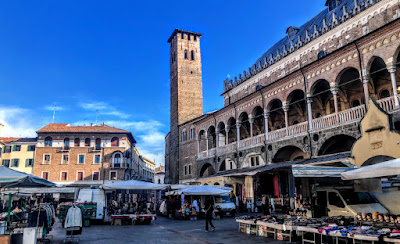 The Piazza dei Frutti in the heart of Padua … the city is a dense network of arcaded streets opening into large communal squares (Photograph: Patrick Comerford)

One recent morning, I took an early morning train from Venice to Padua, which is said to be one of the oldest cities in northern Italy. Padua is listed by Unesco, and has one of the oldest universities in Europe.

Padua is less than an hour from Venice. It is a picturesque city, with a dense network of arcaded streets opening into large communal piazze or squares, and many bridges crossing the branches of the River Bacciglione, which once surrounded the city’s ancient walls like a moat.

But I was visiting Padua primarily to see Giotto’s decoration of the Scrovegni Chapel, which is undoubtedly his masterpiece. It is also one of the supreme masterpieces of the Early Renaissance and one of the most important, self-contained works of art in Western Europe. 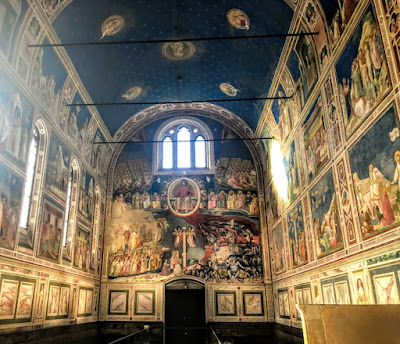 Inside the Scrovegni Chapel in Padua … Giotto’s frescoes form one of the supreme masterpieces of the Early Renaissance (Photograph: Patrick Comerford)

Giotto’s frescoes in
the Scrovegni Chapel

Giotto’s frescoes in the Arena Chapel or the Scrovegni Chapel form one complete cycle. The Italian painter and architect Giotto di Bondone (ca 1267-1337), known generally as Giotto, has been described as ‘the most sovereign master of painting in his time.’

Giotto was born in Florence in the Late Middle Ages, and worked in the Gothic and early Renaissance period. His work marks a decisive break with the Byzantine style, and he initiated the Western art of painting as we know it today.

Giotto completed his decoration of the Scrovegni Chapel between 1303 and 1305 with a fresco cycle depicting the Life of the Virgin and the Life of Christ. This work is regarded as one of the supreme masterpieces of the Early Renaissance. 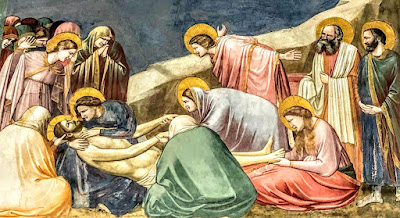 The Deposition of Christ from the Cross in Giotto’s Scrovegni Chapel in Padua (Photograph: Patrick Comerford)

The Scrovegni Chapel or Cappella degli Scrovegni is close to the Augustinian monastery or Monastero degli Eremitani in Padua, and both are now part of the complex of the Museo Civico of Padua
.
It is said the affluent banker Enrico Scrovegni of Padua commissioned the Scrovegni Chapel in 1303, hoping this would spare his dead father, Reginaldo, a usurer, from the eternal damnation that had been wished on him by Dante in his Inferno. 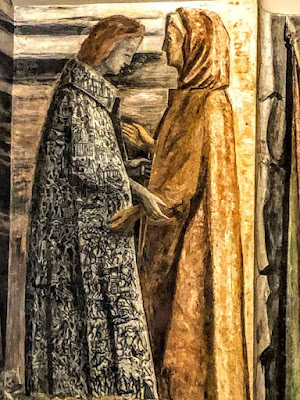 A mural of Dante and Beatrice in the University of Padua … Dante and Giotto were born within two years of each other in Florence (Photograph: Patrick Comerford)

Dante in Padua and
in love with Beatrice

Giotto and Dante are the two great creative forces in the early 14th century Italy. Both were born within two years of each other in Florence; Giotto’s chapel in Padua and Dante’s Divine Comedy remain major influences in shaping European culture.

Did Dante inspire Giotto? Giotto included a portrait of Dante in the Paradise section of the chapel frescoes.

Did Scrovegni insist that Giotto excluded any references to usury in the frescoes? Dante condemns Scrovegni’s father Reginaldo as a usurer in Canto 17 of the Inferno, but this was a few years after Giotto completed the chapel.

The poet and philosopher Dante Alighieri (1265-1321) lived for a time in Padua in a medieval house, and parts of the house, including the balcony, survive on Via San Francesco. Dante’s Divine Comedy is regarded as one of the most important poems of the Middle Ages and the greatest literary work in the Italian language.

The University of Padua was founded in 1222 by a group of students and teachers from Bologna. It is the second-oldest university in Italy and the world’s fifth-oldest surviving university. Faculty members in the past have included Galileo Galilei (1592-1610). A mural in the university is a reminder of the story of Dante and Beatrice, one of the great mediaeval romances. 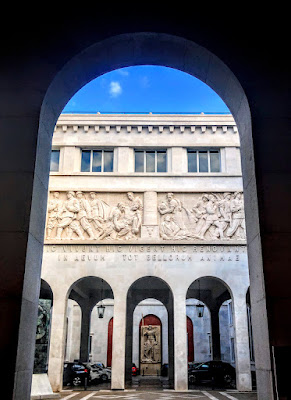 The University of Padua was founded in 1222 and is the world’s fifth-oldest surviving university (Photograph: Patrick Comerford)

Dante said he first met Beatrice Portinari when she was nine, and claimed he had fallen in love with her at first sight, apparently without even talking with her. When he was 12, however, he was promised in marriage to Gemma di Manetto Donati, daughter of Manetto Donati, member of the powerful Donati family.

Contracting marriages for children at such an early age was quite common and involved a formal ceremony, including contracts signed before a notary. Dante claimed to have seen Beatrice again frequently after he turned 18, exchanging greetings with her in the streets of Florence, though he never knew her well.

Years after his marriage to Gemma, he claims to have met Beatrice again; he wrote several sonnets to Beatrice but never mentioned Gemma in any of his poems. The exact date of his marriage is not known: the only certain information is that, before his exile in 1301, he had fathered three children with Gemma.

Beatrice died in 1290 and Dante’s unrequited love for her would set an example of ‘courtly love.’ It was in the name of this love that Dante left his imprint on the dolce stil novo (‘sweet new style’) and he would join other contemporary poets and writers in exploring never-before-emphasised aspects of love (amore).

Dante’s love for Beatrice became his reason for poetry and for living. In many of his poems, she is depicted as semi-divine, watching over him constantly and providing spiritual instruction, sometimes harshly. When Beatrice died in 1290, Dante turned to writing and literature.

The Divine Comedy describes Dante’s journey through Hell (Inferno), Purgatory (Purgatorio), and Paradise (Paradiso). He is first guided by the Roman poet Virgil and then by Beatrice. 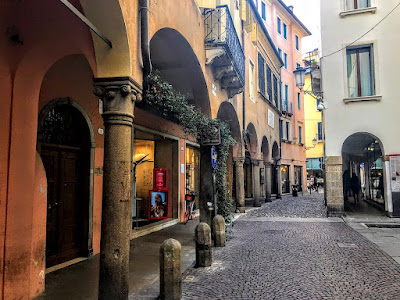 The Venetians confined the Jews of Padua to the ghetto from 1603 (Photograph: Patrick Comerford)

Visiting the Ghetto and
synagogues of Padua

Before leaving Padua, I visited the former Ghetto and the Italian Synagogue, now the only remaining, functioning synagogue in a city where several synagogues had flourished from the Renaissance until World War II.

There was a stable Jewish presence in Padua from the late 13th century, and the Jews of Padua lived in relatively peaceful conditions, working mainly as merchants and bankers. Padua became one of the great centres of mediaeval Judaism learning in the 14th century, with a celebrated rabbinical academy, and Jewish students were admitted to the medical school in Padua.

However, when the Venice captured the city in 1405, conditions gradually worsened for the Jews of Padua. They were forced to sell their homes and lands, and business and trading conditions became increasingly restrictive. Jews could still graduate from the university, but had to pay additional fees.

The Jewish quarter was sacked in 1509 and from 1603 the Jews of Padua were confined to a ghetto in the area of Via San Martino e Solferino, Via delle Piazze and Via dell’Arco. Guarded gates isolated the ghetto at night, rents were high, and living conditions were cramped and unsanitary.

In these cramped conditions, the only way families could find additional accommodation was to build up. Buildings became taller, ceilings became lower on each floor, and many families built tall residential towers. 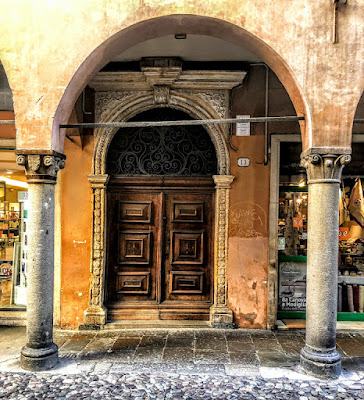 The entrance to the Italian Synagogue, dating from 1548 (Photograph: Patrick Comerford)

When Napoleon’s forces captured Padua in 1797, segregation was abolished, Jews were able once again to live outside the ghetto, and the Jews of Padua achieved full equality with Italian unification in 1866.

The Scola Todesca or Great German or Ashkenazic synagogue opened in 1525, and became the main synagogue of the city. It was damaged by fire in 1927 and then in 1943 it was torched by local Fascists. It remained in ruins until the end of the 1990s, when it was restored, and it now houses the Jewish Heritage Museum of Padua.

The synagogue is in the same building as the offices of the Jewish Community of Padua, and they provide a lasting testimony to the enduring and continuing Jewish presence in Padua.


Posted by Patrick Comerford at 14:30