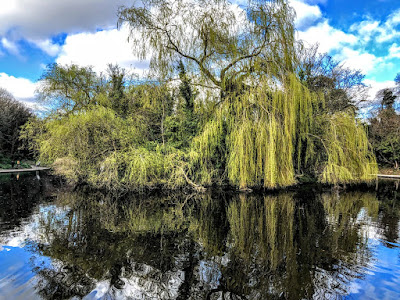 ‘Like a tree planted by streams of water, bearing fruit in due season, with leaves that do not wither, whatever they do, it shall prosper’ (Psalm 1: 3) … willows by the water at Bushy Park in Terenure, Dublin (Photograph: Patrick Comerford)

Lent begins today, Ash Wednesday (2 March 2022). Before this day begins, I am taking some time early this morning for prayer, reflection and reading.

Psalm 1, which is an introduction to the book of Psalms, contrasts the fate of the godly and the ungodly. The psalmist speaks of the happiness of the godly. They do not live as the ungodly do. Instead, they constantly and joyfully study God’s law, and they keep it. They prosper like trees planted by living water that bear fruit, and they are prosperous.

On the other hand, the ungodly are like chaff, and their future threatens to be a disaster. They will be excluded from the company enjoyed by those who follow God’s ways, and will suffer.

Psalm 2 was probably written for the coronation of a king of Judah. The word anointed is messiah in the Hebrew. It was used as the title of an Israelite king, but after the end of the monarchy it became the title or name of the ideal future king who would restore Israel to glory. New Testament writers apply this title to Christ.

Subject kings are plotting a rebellion against the new king instead of accepting him as the Lord’s anointed representative, so their rebellious plots are like a revolt against God himself. God responds (verse 4-6), saying he has chosen ‘my king’ and established him in his dwelling place on earth at Zion or Jerusalem.

The new king then then speaks (verses 7-12), accepting his adoption as God’s son, and warns other kings to submit.

Psalm 3 is also known by its opening words in Latin, Domine quid multiplicati sunt. The psalm is a personal thanksgiving to God, who answered the prayer of an afflicted soul. It is attributed to David and relates in particular to the time when he fled from his son Absalom.

David spent more years fleeing Saul as a young man than he spent fleeing his son Absalom. David will even write many psalms later through the book of psalms on situations where he was being chased by Saul. Here is one of the opening psalms in the book of psalms and it is about the painful experience of fleeing from his own son.

This is the first Psalm with a title in the original (‘A Psalm of David, when he fled from his son Absalom’), and it is set in a time of crisis in David’s life. David fled Absalom because of a series of events as a result of David being under discipline for his own sins regarding Bathsheba and Uriah the Hittite (see II Samuel 11). In that light, the prayer is a model for looking to God for help even when we feel chastised by God’s chastisement. David lays down to sleep and wakes up protected and sustained by providence. And he prays ‘may your blessing be on your people!’

This is also the first Psalm to refer to a selah, after verses 2, 4 and 8. The final selah possibly indicates that Psalm 3 and Psalm 4 are linked.

Later in the Bible, the prayer of Jonah in the ‘fish’ starts with Psalm 3 and Jonah also ends his prayer drawing on Psalm 3.

1 Happy are those
who do not follow the advice of the wicked,
or take the path that sinners tread,
or sit in the seat of scoffers;
2 but their delight is in the law of the Lord,
and on his law they meditate day and night.
3 They are like trees
planted by streams of water,
which yield their fruit in its season,
and their leaves do not wither.
In all that they do, they prosper.

1 Why do the nations conspire,
and the peoples plot in vain?
2 The kings of the earth set themselves,
and the rulers take counsel together,
against the Lord and his anointed, saying,
3 ‘Let us burst their bonds asunder,
and cast their cords from us.’

4 He who sits in the heavens laughs;
the Lord has them in derision.
5 Then he will speak to them in his wrath,
and terrify them in his fury, saying,
6 ‘I have set my king on Zion, my holy hill.’

7 I will tell of the decree of the Lord:
He said to me, ‘You are my son;
today I have begotten you.
8 Ask of me, and I will make the nations your heritage,
and the ends of the earth your possession.
9 You shall break them with a rod of iron,
and dash them in pieces like a potter’s vessel.’

10 Now therefore, O kings, be wise;
be warned, O rulers of the earth.
11 Serve the Lord with fear,
with trembling 12 kiss his feet,
or he will be angry, and you will perish in the way;
for his wrath is quickly kindled.

Happy are all who take refuge in him.

A Psalm of David, when he fled from his son Absalom

1 O Lord, how many are my foes!
Many are rising against me;
2 many are saying to me,
‘There is no help for you in God.’
Selah

3 But you, O Lord, are a shield around me,
my glory, and the one who lifts up my head.
4 I cry aloud to the Lord,
and he answers me from his holy hill.
Selah

5 I lie down and sleep;
I wake again, for the Lord sustains me.
6 I am not afraid of tens of thousands of people
who have set themselves against me all around.

7 Rise up, O Lord!
Deliver me, O my God!
For you strike all my enemies on the cheek;
you break the teeth of the wicked.

8 Deliverance belongs to the Lord;
may your blessing be on your people!
Selah

The Prayer in the USPG Prayer Diary today (2 March 2022, Ash Wednesday) invites us to pray:

Let us pray, that as we journey this Lent towards Easter, we might share in the suffering and the joy of the living Christ with all whom we meet.