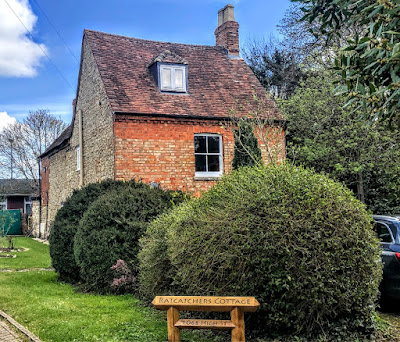 The Ratcatcher’s Cottage is beside the Tower of Saint Mary Magdalen, off the High Street in Stony Stratford (Photograph: Patrick Comerford, 2022)

The Ratcatcher’s Cottage, behind the Tower of Saint Mary Magdalen, is off the High Street in Stony Stratford.

At first, this may not sound like a desirable address in Stony Stratford. On the other hand, it may sound like a romantic, fairy tale address, evocative of the story of the Pied Piper of Hamelin.

The house stands on land that once belonged to the Malletts, once Stony Stratford’s manor house and the home of the Edy family.

The Malletts was once a substantial mediaeval hall, and in the second half of the 15th century it belonged to John Edy, at one time steward of the Longueville estates, and who founded a guild in 1481.

The first reference to the Malletts appears in Edy’s will dated 20 September 1487 at the Malletts, when he asked to be buried in the churchyard of Saint Mary Magdalene, in Stony Stratford.

John Edy’s house was on the edge of Saint Mary Magdalene churchyard, near at the end of Vicarage Road today. Thomas Piggott of Beachampton married Edy’s daughter Isabel and inherited the Mallets estate. Piggott’s coat of arms was based on three mallets. Piggott was a prosperous 15th century lawyer.

A map of Stony Stratford ca 1680 shows the Malletts and the fields which by then had become attached to the house, a kind of sub-manor.

The stewards of Wolverton Manor continued to live there until Dr John Radcliffe took possession in 1712. John Battison, the steward at that time, continued working for the new owner. He was living at Quinton and there is no suggestion that any of Radcliffe’s estate managers lived there.

The house and the land were bought by William Golby in the 19th century. He pulled down the mansion in 1830 but retained a barn. This barn was renovated in 1865, a second storey was added, and it was converted into a house known as ‘The Ring,’ taking its name from the adjacent land where horses were broken in.

The Ratcatcher’s Cottage has an early 20th century brick front, but house dates from the late 17th century or early 18th century. Inside, the house has a large inglenook fireplace.

The Ratcatcher’s Cottage received its name from a resident of the house who is said to have been a successful rat catcher in Stony Stratford in the early 20th century.