‘The just shall not put their hands to evil’ (Psalm 125: 3) … the courthouse in Skibbereen, Co Cork (Photograph: Patrick Comerford, 2021)

Psalm 125 is the sixth in a series of 15 short psalms (Psalm 120-134) known as the ‘Songs of Ascents.’ These psalms begin with the Hebrew words שיר המעלות‎ (Shir Hama’a lot). In the slightly different numbering system in the Greek Septuagint and the Latin Vulgate, this is counted as Psalm 124. It is sometimes known by its opening words in Latin, Qui confidunt in Domino.

Psalm 125 is short psalm of five verses. This psalm is a prayer expressing trust in God, likening Divine protection to the hills that surround Jerusalem.

Power and wealth do not make someone strong and firm like a mountain, but trust in God or faith. Those who have power and privilege may be wicked, but we are called to be good and ‘true of heart.’

The concluding prayer for peace upon Israel is heard once again at the end of Psalm 128. This phrase, ‘Peace be on Israel,’ became popular in later times and is found as part of the mosaic in the Byzantine synagogue in Jericho, dating from the sixth century CE. 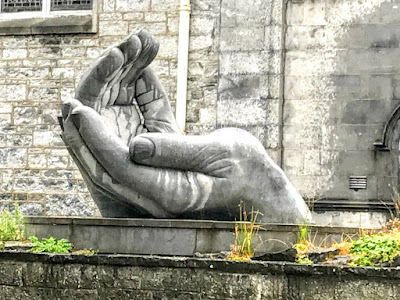 ‘The righteous may not stretch out their hands to do wrong’ (Psalm 125: 3) … ‘Healing Hands,’ a sculpture by Shane Gilmore in grounds of the Cathedral of Saint Peter and Saint Paul in Ennis, Co Clare (Photograph: Patrick Comerford, 2021)

1 Those who trust in the Lord are like Mount Zion,
which cannot be moved, but abides for ever.
2 As the mountains surround Jerusalem,
so the Lord surrounds his people,
from this time on and for evermore.
3 For the sceptre of wickedness shall not rest
on the land allotted to the righteous,
so that the righteous may not stretch out
their hands to do wrong.
4 Do good, O Lord, to those who are good,
and to those who are upright in their hearts.
5 But those who turn aside to their own crooked ways
the Lord will lead away with evildoers.
Peace be upon Israel!

We pray for good relationships between churches, local communities and Members of Parliament. May they work together for the common good.