Stony Stratford has been called ‘the jewel of Milton Keynes’ and is a busy market town with shops, banks, restaurants, a health centre, a library and historic public houses. The town rejoices in being a ‘historic coaching town’ – a reputation enhanced by the survival of the Cock and the Bull on High Street, which I can see from my front window.

But, apart from the coaching inns, the town had many historic public houses in the past, as Bryan Dunleavy, Ken Daniels and Andy Powell reveal in their very comprehensive and richly illustrated Inns of Stony Stratford.

From the terrace behind my flat, I can see the roofs of many of the house on Market Square. At one time, as Dunleavy, Daniels and Powell show in their research, the sides of Market Square were lined by at least nine public houses or inns, although the only one to have survived the economic and social changes over the centuries is the Crown at 9 Market Square.

The name of ‘The Crown’ may have been suggested in a flush of enthusiasm after the restoration of the crown in 1660 (Photograph: Patrick Comerford, 2022)

The Crown is the last remaining pub on Market Square, and dates from 1666 if not earlier, giving it a continuous history over 350 years. Indeed, it may have existed long before with another name before ‘The Crown’ was suggested in a flush of enthusiasm after the end of the Civil War and restoration of Charles II in 1660.

In their painstakingly researched history, Dunleavy, Daniels and Powell ask whether the Crown was once a coaching inn, suggesting this is indicated by the central doorway.

If the Crown was once a coaching inn, then only the Cock and the Bull on High Street are older among the surviving pubs and inns in Stony Stratford.

The Plough and the White Lion stood at 2 Market Square, behind the yard of the George (Photograph: Patrick Comerford, 2022)

The Plough at 2 Market Square is first referred to in 1753. The house had a brewhouse and a small paddock at the back. The Plough was licensed to Edward Salter until the 1760s, and had backed onto the George Yard.

The Plough was renamed the White Lion by Thomas Honeybone in 1765. The last licensee was Edward Knight in 1783, but the brewhouse may have continued to the used by the George into the early 19th century. 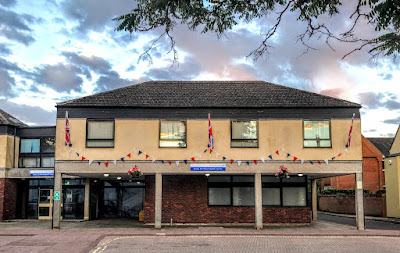 The Green Dragon was on the south side of the square at 5 or 6 Market Square (Photograph: Patrick Comerford, 2022)

The Green Dragon was on the south side of the square at 5 or 6 Market Square. It was first referred to in 1619, and stayed open in the 17th, 18th and 19th centuries.

The property has since been demolished, and replaced with modern offices and medical facilities.

The White Hart may have been at 8 Market Square from 1625 or earlier (Photograph: Patrick Comerford, 2022)

The White Hart, once at 8 Market Square, may have been there from 1625 or earlier. It remained on Market Square until it was taken over by Stony Stratford Working Men’s Club in 1895.

The club was first established on the High Street, and moved to the former White Hart in 1895. It stayed there until 1948, when the club moved to London Road. It closed in 2009.

The Crown at No 9 stood between the former White Hart at No 8 and the former Barley Mow at No 10 Market Square.

The former Barley Mow is a 400-year-old building dating back to at least the 17th century (Photograph: Patrick Comerford, 2022)

The former Barley Mow is a 400-year-old building. It was first recorded at No 10 Market Square in 1753, but dates back to at least the 17th century. When No 10 was on the market recently, it was said it had been built as the town’s court room and that over time the pub in theses premises had been known as the Barley Mow and Queen’s Head.

The Barley Mow was a substantial premises, with its own brewhouse at the back, stables, several outbuildings and two acres of pasture in a field that extended back into the present Cofferidge Close.

At one time, the leasehold was held from Lord Salisbury, who sold the property in 1802 to relieve himself of the Land Tax.

The Barley Mow closed as a pub in 1819, and since then has been used a shop, a private residence, and an exhibition area. More recently, No 10 was offices for Wolverton Urban District Offices.

The house was converted into a residential property in 2011 and was on the market with an asking price of £950,000. A Grade II listed building, it was described as an ‘historic home’ and a ‘grand property’ with three reception rooms, five double bedrooms, three bathrooms and a courtyard garden.

The Old King’s Head at 11 Market Square may have dated from the late mediaeval period (Photograph: Patrick Comerford, 2022)

Across the street from the Barley Mow, the King’s Head, was at 11 Market Square, close to the junction with Silver Street, and may have been there from 1640 or earlier, perhaps dating back to the mediaeval period.

If so, then the name of the King’s Head predates the execution of Charles I in 1649. Perhaps its name complimented the name of the Queen’s Head, which survived briefly at No 10.

Nos 12 and 13 Market Square forms an interesting, later 17th century two-storey stone house, once to the Malpas family, who gave their name to an hotel next door.

The stones forming the heads of windows on the ground floor have sloping sides and curved tops which, with a raised keystone, give the forms of a crown. The doorway has a good moulded eared architrave, with a carving of long leaves spreading out and down from a boss with a head of a putti above a carved keystone.

Above the front door and resting on the band is a rectangular plaque with the letters ‘IAM’ above an heraldic shield and the date 1790. The letters IAM may refer to Joseph and Amelia Malpas.

The name of the former Fighting Cocks is recalled in an image still seen on the three-storey façade of 14 Market Square, dated 1770.

The house may have been first built in the 16th century, and may have survived Stony Stratford’s devastating fire in 1736.

This was a shop, with a workshop in the area behind it, but may have been rebuilt in part after the fire, and it became a pub in 1760. It was sold in 1794.

Perhaps the Malpas family gave their name to the Malpas Hotel, later the Commercial Hotel, at Nos 14 and 15 Market Square. Today, No 14 houses the Alliance Française de Milton Keynes.

No 16 Market Square, now an estate agent’s office, was once the Bell (Photograph: Patrick Comerford, 2022)

No 16 Market Square is now an estate agent’s shopfront and offices.

But in the 18th century this building was known as the Bell, trading as a public house from at least 1713, if not earlier, until about 1780.

The name of the Sun and Moon is recalled in ‘Sun and Moon House’ on the north side of Market Square (Photograph: Patrick Comerford, 2022)

The Sun and Moon stood on the north side of Market Square from the 1660s. Later, it was known as the Crooked Billet, which traded from about 1684 until about 1821. It was said to have a very seedy reputation, and to have been the ‘haunt of tramps, hucksters, vagabonds and soldiers.’

The Crooked Billet was sold off in 1821, and the building which also had a frontage onto the south side of Church Street, was demolished in 1937.

But the earlier name is recalled in ‘Sun and Moon House’ on the north side of Market Square.

The name of the former Fighting Cocks is recalled in an image on the façade of 14 Market Square (Photograph: Patrick Comerford, 2022)