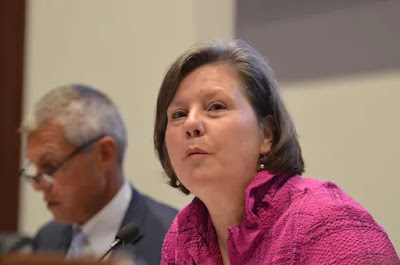 Senator Joanne M Comerford is a US politician and is currently a member of the Massachusetts State Senate – the first woman to hold the seat.

Jo Comerford studied at Hunter College School of Social Work in New York, where she focused on homelessness policy, prison reform, and earned an MSW degree. Since the late 1990s, Jo has lived and worked in western Massachusetts.

She led a crisis intervention outreach team in the region through the Centre for Human Development focused on creating a high-impact team capable of addressing the myriad and often intersecting root causes of crisis.

She then spent seven years as the western Massachusetts director of American Friends Service Committee, a Quaker organisation devoted to service, development and peace programmes throughout the world.

She moved from AFSC to direct the programmes of the Food Bank of Western Massachusetts, where she worked to meet the immediate demands of hunger and launched a pilot programme to reduce food insecurity in the region.

After the Food Bank, Jo led National Priorities Project, a national budget and tax priorities research organisation, as its executive director. NPP was nominated for the Nobel Peace Prize in Jo’s final year. She has since been a Campaign Director for MoveOn.

Jo Comerford won her first race, a primary election for the state senate, entirely on write-in votes. The long-time incumbent senator for her district resigned abruptly in May 2018 in the face of an ethics scandal, after the filing deadline for potential challengers.

After an energised grassroots campaign that mobilised over 650 registered volunteers and adopted the rallying cry ‘Go With Jo,’ 14,196 voters wrote in Jo Comerford as their preferred candidate, defeating the only candidate whose name was printed on the ballot and two other write-in candidates.

Senator Jo Comerford was the guest speaker in 2019 at the annual dinner of the American Friends Service Committee.

In 2021, she was appointed as the Massachusetts state senate’s leader of a COVID-19 working group, helping to provide oversight of the state’s pandemic response. She has advocated for full funding for public schools, turning Massachusetts into a zero emissions state, health care reform, revenue equity, a police reform bill that was passed in 2020, and work on bringing rail to the western part of the state, among other priorities.

In 2021, she filed a bill to establish a five-year moratorium on the construction of new prisons and jails in Massachussetts, in partnership with Representative Chynah Tyler.

Most recently, Jo’s volunteer efforts have been based at Jackson Street School where she helped lead the fundraising campaign to build a new and expanded playground. She also serves as a founding board member of the Sojourner Truth School for Social Change Leadership.

Jo is married to Ann Hennessey, a public school teacher who represented Ward 5 on the Northampton School Committee. They have two children and live in Northampton with their dog and two cats.