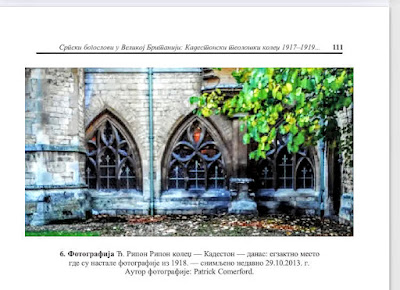 My morning prayer diary on my blog throughout this week is illustrated with photographs of churches and chapels in Oxford, beginning this morning with a reflection that includes Christ Church, which has a unique status as both a diocesan cathedral and a college chapel.

This photographs were taken during a visit to Oxford earlier this month, and follows a reflection on Friday evening on my visit to the Oxford Jewish Centre.

I had already been in Oxford earlier this year, when I was transferred from Milton Keynes University Hospital to John Radcliffe Hospital in Oxford following my stroke in March.

So, it was interesting to realise this week that one of my photographs from Ripon College Cuddesdon was used as a full-page illustration in a Serbian theological journal published in Belgrade almost ten years ago.

Bogdan Lubardić, is the author of ‘Justin Popović in Oxford 1916-1919: From Romanticised Facts to the Fact of Romantism’, a paper in Serbian Theology in the 20th Century: Research Problems and Results, edited by B Šijaković, vol 10 (Belgrade: Faculty of Orthodox Theology, 2011), pp 75-197.

Professor Bogdan Lubardić teaches philosophy in the Faculty of Orthodox Theology at Belgrade University, where he teaches the history of philosophy and the philosophy of religion, and supervises doctoral studies on the concept and meaning of religious philosophy.

His research has been published in Serbian, English, French, Italian and Russian. He was editor-in-chief of the scientific journal Bogoslovlje Theology (2010-2012), and is an active member of editorial boards of a number of journals, including Φιλοθεοσ (Philotheos): International Journal for Philosophy and Theology and Analogia: International Journal for Theological Studies. He has been a member of the International Commission for Anglican-Orthodox Theological Dialogue.

My photograph appears as a full-page illustration on p 111.

Justin Popović (1894-1979) was a important 20th century Serbian Orthodox theologian, an archimandrite in the Ćelije Monastery, a renowed scholar on the life and work of Dostoyevsky, a writer, a vocal opponent of the communist regime in the former Yugoslavia and a critic of the pragmatic compromises the Church in Serbia had made with the political system.

He did his doctoral research on the philosophy and religion of Dostoyevsky in Oxford in 1916-1919, but his doctoral thesis was not accepted due to its radical criticism of Western humanism, rationalism, Roman Catholicism, and anthropocentrism. It was later printed in 1923 when Popović became the editor of the Orthodox journal The Christian Life. He received his doctorate in theology at the University in Athens in 1926. With colleagues from Oxford he edited the periodical The Christian Life for 20 years.

His work was a significant contribution to Orthodox theology and he is often seen as ‘the secret conscience of the Serbian Church.’ He was canonised a saint by the Serbian Orthodox Church in 2010. He is one of the three most notable Serb theologians to be recognised internationally.

I do not have to explain that I cannot read Serbian, and this is not a journal that I would have come across as part of my normal, everyday reading and research.

Although the journal is dated 2011, my photoraph was taken in 2013. The discrepancy in years is easily explained.It is a perennial problem that academic journals often get published some time after their cover date, due to delays in back issues, sometimes caused by the slow processes of peer reviews and editing.

That two-year gap is easy to understand. But it took almost a full decade for me to find out that one of my photographs from the chapel of a theological college in Oxford had been used in this way in a theological journal in Belgrade all those years ago.