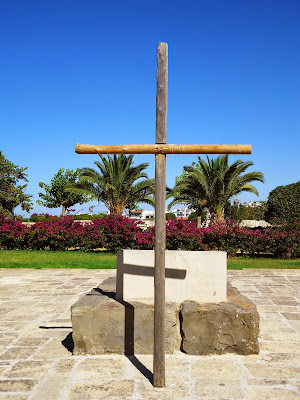 ‘Every man worthy of being called a son of man bears his cross and mounts his Golgotha’ (Nikos Kazantzakis) … the grave of Nikos Kazantzakis in Iraklion bears a simple cross (Photograph: Patrick Comerford)

This has been the final week in Ordinary Time this year in the Calendar of the Church, the week between the Feast of Christ the King last Sunday and Advent Sunday tomorrow.

Later today, the Christmas lights are being switched on in Stony Stratford, with a number of street events, including street music and a lantern parade.

During this week, I have been reflecting in these ways: 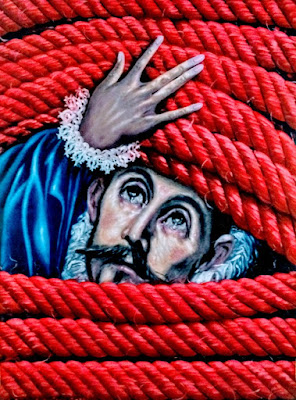 An image in an exhibition celebrating El Greco in the Fortezza in Rethymnon … Kazantzakis addresses Domenikos Theotokopoulos (El Greco) as his Cretan ‘grandfather’ (Photograph: Patrick Comerford) 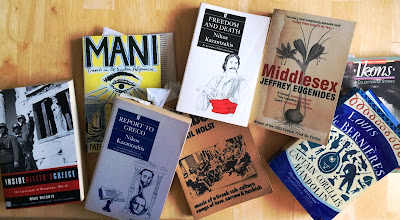 Kazantzakis is one of the great writers in modern Greek literature (Photograph: Patrick Comerford)

In The Last Temptation of Christ, Kazantzakis presents a tragic Christ wrestling all his life with the conflicting claims of his divine mission and duty and his human desire to live a normal life, to love and be loved, and to have a family. In this book, Christ summarises his purpose and mission: ‘I said only one word, brought only one message: “Love. Love – nothing else”.’

Writing about this book, Kazantzakis said: ‘I am certain that every free man who reads this book, so filled as it is with love, will more than ever before, love Christ.’

I have had lunch in the past with friends in Peskesi in a restored historical mansion in Iraklion. This was once the home of Captain Polyxigkis, a Cretan freedom fighter from the 1860s who features in Freedom and Death (Ο Καπετάν Μιχάλης, Captain Michalis), the 1953 semi-historical novel by Kazantzakis.

The name of Peskesi (Πεσκέσι, ‘Gift’) is inspired by his semi-autobiographical Report to Greco («Αναφορά στον Γκρέκο»), where he addresses his Cretan ‘grandfather,’ Domenikos Theotokopoulos, El Greco:

‘But you had turned into a flame. Where shall I find you, how shall I see you, what gift shall I bring you to make you remember Crete, to make you raise from the dead? Only the flame can be at your mercy; oh, if only I could become a flame to meet you.’

In his introduction to Report to Greco, Kazantzakis says ‘My entire soul is a cry, and all my work the commentary on that cry.’

He goes on to say: ‘Every man worthy of being called a son of man bears his cross and mounts his Golgotha. Many, indeed most, reach the first or second step, collapse pantingly in the middle of the journey, and do not attain the summit of Golgotha, in other words the summit of their duty: to be crucified, resurrected, and to save their souls. Afraid of crucifixion, they grow fainthearted; they do not know that the cross is the only path to resurrection. There is no other path.’

Later in the book, he writes: ‘Whoever climbed the Lord’s mountain had to possess clean hands and an innocent heart; otherwise the Summit would kill him. Today the doorway is deserted. Soiled hands and sinful hearts are able to pass by without fear, for the Summit kills no longer.’

When the Church of Greece condemned Kazantzakis in 1955 and anathematised him, his response was prompt and clear: ‘You gave me a curse, Holy fathers, I give you a blessing: may your conscience be as clear as mine and may you be as moral and religious as I.’ (<<Μου δώσατε μια κατάρα, Άγιοι πατέρες, σας δίνω κι εγώ μια ευχή: Σας εύχομαι να ‘ναι η συνείδηση σας τόσο καθαρή, όσο είναι η δική μου και να ‘στε τόσο ηθικοί και θρήσκοι όσο είμαι εγώ.>>).

‘Whoever climbed the Lord’s mountain had to possess clean hands and an innocent heart’ (Nikos Kazantzakis) … looking across Iraklion and out to the Mediterranean from the grave of Kazantzakis (Photograph: Patrick Comerford)

Collect on the Eve of Advent 1:

Almighty God,
give us grace to cast away the works of darkness
and to put on the armour of light,
now in the time of this mortal life,
in which your Son Jesus Christ came to us in great humility;
that on the last day,
when he shall come again in his glorious majesty
to judge the living and the dead,
we may rise to the life immortal;
through him who is alive and reigns with you,
in the unity of the Holy Spirit,
one God, now and for ever.

The theme in the USPG Prayer Diary this week has been ‘Prophetic Voice of the Nation.’ This theme was introduced on Sunday by Bishop Matthew Mhagama, from the Diocese of South-West Tanganyika in the Anglican Church of Tanzania.

Let us pray for the revival and reformation of the Church in Tanzania. 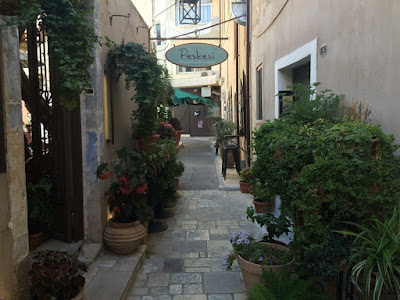 Peskesi in a restored mansion in Iraklion that takes its name from a line in ‘Report to Greco’ (Photograph: Patrick Comerford) 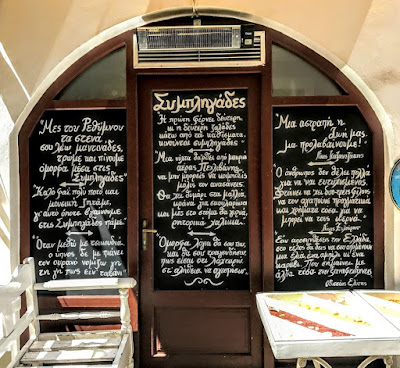 A quotation from Nikos Kazantzakis (top right) among Greek rhymes and songs, poets and poems, in a doorway in Rethymnon … Μια αστραπή η ζωη μας, μα προλαβαίνουμε, ‘Our life is a flash of lighting, but we are ahead’ (Photograph: Patrick Comerford,)