Praying through poems and
with USPG: 11 January 2023

‘Those Eastern kings / Did not present thee with more precious things’ … the Adoration of the Magi, with man-sized statues, in the oldest-known crib in the world made up of statues in the round, in Santo Stefano, Bologna (Photograph: Patrick Comerford)

This is our last day in Helsinki, where we have visiting the Revd Tuomas Mäkipää and Saint Nicholas’ Anglican Church since Monday. For the last week, Charlotte and I have been visiting Hungary and Finland with the Anglican mission agency USPG (United Society Partners in the Gospel) and the Diocese in Europe, looking at how the church and church agencies there are working with refugees from Ukraine. We return on a flight to London later this evening.

As these Epiphany-tide journeys across Europe come to an end today, my choice of a seasonal poem this morning is ‘Royal Presents’ by Nathaniel Wanley (1634-1680). It was included in the Service of Carols and Readings from King’s College, Cambridge, in 2014.

The Revd Nathaniel Wanley was an Anglican priest and writer, known for The Wonders of the Little World.

He was born in Leicester, where his father was a mercer. He was educated at Trinity College, Cambridge (BA 1653, MA 1657), and became Rector of Beeby, Leicestershire. When the Puritan John Bryan was forced to resign as Vicar of Holy Trinity Church, Coventry, Wanley succeeded him in 1662.

Wanley was sympathetic to the prevailing Puritanism in Coventry, and remained friends with his predecessor Bryan, who attended his services while ministering to a nonconformist congregation. When Bryan died in 1676, Wanley preached at his funeral, and his sermon was published posthumously as Peace and Rest for the Upright (1681).

Wanley died in 1680 and was succeeded by the Revd Samuel Barton. Wanley left to the grammar school in Coventry his copy of the Imitatio Christi, described as ‘Ecclesiastical Music, written on Parchment, about the time of King Edward IV.’

His first publication, Vox Dei, or the Great Duty of Self-reflection upon a Man’s own Wayes (1658), was dedicated to Dorothy Spencer, Countess of Sunderland. He also published War and Peace Reconciled … two books (1670, 1672), a translation from the Latin of Justus Lipsius.

Wanley’s major work is The Wonders of the Little World; or a General History of Man. In Six Books (1678), dedicated (17 June 1677) to Sir Harbottle Grimston. He also compiled a history of the Fielding family.

His former church, Holy Trinity Church, is one of the few major buildings in Coventry that escaped destruction during the bombing raids in World War II. 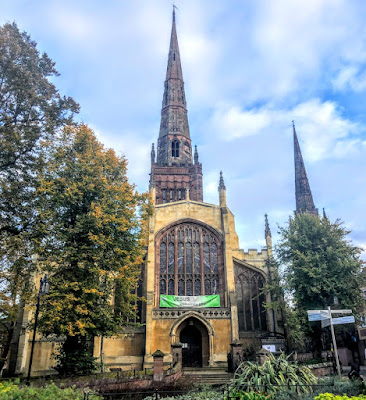 The off’rings of the Eastern kings of old
Unto our lord were incense, myrrh and gold;
Incense because a God; gold as a king;
And myrrh as to a dying man they bring.

Instead of incense (Blessed Lord) if we
Can send a sigh or fervent prayer to thee,
Instead of myrrh if we can but provide
Tears that from penitential eyes do slide,

‘May we recognise the gifts we bear and be generous in our sharing of all that is good’ (USPG Prayer Diary) … the Worship of the Magi, depicted in Saint Mary’s Church, Lichfield (Photograph: Patrick Comerford)

Let us pray for wise stewardship of our gifts. May we recognise the gifts we bear and be generous in our sharing of all that is good. 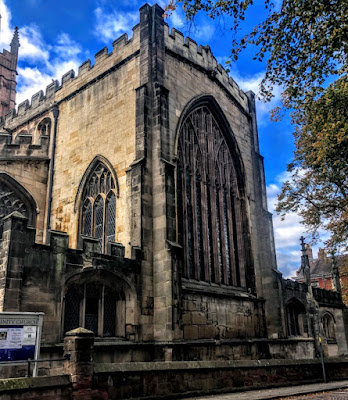