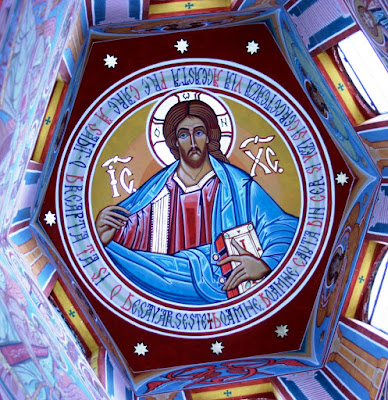 The Byzantine-style dome in a Romanian Orthodox Church in Bucharest … the influence of Byzantium is found in living cultures and traditions (Photograph: PatrickComerford)

Music in the background: Tracks 26 and 27 from Russian choir.

There is a story in the Orthodox Church, related in the Primary Chronicle, the earliest written record of the Russian nation. It tells how Vladimir, Prince of Kiev, when he was still a pagan at the end of the tenth century, sent envoys out to discover what was the true religion and to advise on which religion should become the state religion.

They first visited the Muslim Bulgars of the Volga, but found no joy among them ‘but mournfulness and a great smell.’

In Germany, and in Rome, they found the worship and liturgy was without beauty.

‘Then we went to Greece, and the Greeks led us to the edifices where they worship their God.’ But when the Slav envoys reached Byzantium, they were so dazzled by the splendour of Byzantine liturgy in the great church of Aghia Sophia they instantly decided that Orthodoxy should the faith of the Slav people. ‘And we knew not whether we were in heaven or on earth, for surely there is no such splendour or beauty anywhere upon earth. We cannot describe it to you: only this we know, that God dwells there among humans, and that their service surpasses the worship of all other places. For we cannot forget that beauty.’

Images of Byzantium continue to be muddled:

Byzantium is dead and gone, and so when we talk of things Byzantine we can mean that they are outdated, obscure, or of merely antiquarian value.

Byzantine intrigue: we think of the court plots and palace coups, and transfer that imagery to present-day politics before a great upheaval.

Byzantine structures: we think of courts with so many minions with obscure layers that made it difficult to reach decisions, or made it possible for those who needed redress to reach those who really had the power to make decisions.

We often associate Byzantium with a church or a political society more concerned with its own structures and a complex system of class and office, looking in on itself rather than out into the world.

And we think that Byzantium is dead and gone.

Of course, as a political empire it is. But it survived among the Phanariots, the Christians from Istanbul rulers appointed from the Ottoman court to rule the subject Balkan provinces, and among their subjects, and its heritage lives on in the culture, religion, art, and the mindset of millions of people in countries like Greece, Romania, Cyprus and Russia.

Tell the story of visiting All Saints’ Church, Bucharest, two weeks ago. Admired the Byzantine frescoes and icons. Delighted in the Byzantine choral tradition that is still alive. Asked for a bishop’s letter. To be asked: which bishop?

And then, with a twinkle in his eye: ‘Of course, you know, this is a Byzantine church?’

But still, for many, Byzantium is elusive, a promised land, the El Dorado of the East, the Hidden Gateway to the Orient, the romantic ideal city, the Tír na nÓg of the classical world.

And it was as such that it was portrayed by WB Yeats in his poem, Sailing to Byzantium:

That is no country for old men. The young
In one another's arms, birds in the trees
– Those dying generations - at their song,
The salmon-falls, the mackerel-crowded seas,
Fish, flesh, or fowl, commend all summer long
Whatever is begotten, born, and dies.
Caught in that sensual music all neglect
Monuments of unageing intellect.

This poem, Sailing to Byzantium embodies a number of Yeats’s most enduring tropes: the old man as scarecrow, the cycles of history as the gyre, the pristine and preserved world of Byzantium as escape.

In the final stanza of the poem, the speaker asks implicitly to be made into an artificial bird that might sing of past, present, and future. Much has been made of this bird aspiration, starting with Yeats’s own note that he had ‘read somewhere’ about mechanical birds in Byzantium, and continuing with critics’ examinations of Hans Christian Andersen’s story, The Emperor's Nightingale.

Yeats himself once declared:

‘I think that if I could be given a month of antiquity and leave to spend it where I chose, I would spend it in Byzantium a little before Justinian opened St Sophia and closed the Academy of Plato ... I think that in early Byzantium, maybe never before or since in recorded history, religious, aesthetic, and practical life were one, that architects and artificers ... spoke to the multitude in gold and silver. The painter, the mosaic worker, the worker in gold and silver, the illuminator of sacred books were almost impersonal, almost perhaps without the consciousness of individual design, absorbed in their subject matter and that the vision of a whole people.’ [William Butler Yeats, from A Vision.]

But apart from romance, and apart from Irish romantic poetry in particular, why should we spend the next few weeks, as it were, ‘Sailing to Byzantium’?

1, Last year, we were studying Islam and its impact on the western Christian world. From the very beginning, under the caliphs, there was a close relationship with the world of Byzantium. At times, this was a political relationship that was marked by war and violence. But at times it was mutually beneficial. And when, eventually, Byzantium fell to the Ottomans in 1453, just over 550 years ago, the Sultans rejoiced not the collapse of an ancient enemy but in the capture of Constantinople. They saw themselves as heirs and successors to the Comnenis, Paleologues and Lascaris. They were just another dynasty, albeit a Muslim dynasty.

3, Appropriate: this year [2004] marks the 800th anniversary of the sacking of Constantinople in the Fourth Crusade. We saw last year the damage the Crusades did to our (Christian/Western) relations with them (Islamic/Eastern). But perhaps they did even greater damage to relations between the Latin West and the Orthodox East. e.g., Samuel Huntingdon’s fault line.

4, Politically, to understand the new ways in which Europe is being shaped politically: Greece is already a member of the European Union, Cyprus joins in May, Bulgaria and Romania join in 2007, and Turkey is seeking membership. There was Byzantine influence in many parts of central Europe, so that the European Union is uniting the old territories of what were once the Holy Roman Empire and once the Byzantine Empire.

5, To right some wrongs in terms of how the overall landscape of European history has been painted in the past. The longest and most successful empire in our culture, lasting for eleven centuries (compare Byzantium’s 1,123 years with the present British system which traces itself back to 1066, and at 938 years is still far short of that lengthy Byzantine Imperial continuity; 1,123 years from today would bring us back to the year 981, when Brian Boru was a young man; compare 1,123 years with the short-lived Romanov, Habsburg, Napoleonic, Prussian or Nazi empires).

6, From a women’s point of view, it is an interesting venture in righting the wrongs of political and cultural history. In Byzantium, women’s rights reached a level that they would never reach again in any political society until the 18th, 19th or even 20th centuries.

7, From a religious point of view: Byzantium shaped the modern corpus of generally agreed, accepted and taught beliefs in Christian theology. Councils of the Church set definitions at Nicaea, Constantinople and Chalcedon, often despite and in the face of opposition from the Popes, Rome and Western Christian prelates, definitions that we still use when we recite the Nicene Creed.

8, From a spiritual point of view: to enter into the world of Byzantine icons, Byzantine chant, Byzantine prayer (the Jesus Prayer), &c.

9, To understand the new Ireland: many of our new immigrants have had their thought processes, their ways of thinking, their ways of praying and singing and worshipping shaped by the traditions and culture of Byzantium: Romanians, Moldovans, Russians, Ukrainians, and Belarussians. Walking through the streets of Bucharest last month [January 2004], I was surprised how many princely Byzantine family names survive even in Romania: Cantacuzeni, Rosetti, Mavrocordatos.

10, To enjoy your holidays: whether you visit Greece, Turkey, Cyprus, Syria, Lebanon, Israel/Palestine, Egypt … to enjoy the world of Byzantium as sketched in William Dalrymple’s book.

11, For the sheer pleasure of armchair travel.

So, sit here with me over the next few weeks and enjoy sailing to Byzantium.

Topics to cover over these few weeks:

2, An introduction to Byzantine studies.

3, A brief history of Byzantium and the Byzantine empire.

4, Heroes, anti-heroes and the women of Byzantium: some biographical sketches.

5, Byzantine culture: The architecture and the art of Byzantium: the world of Aghia Sophia and the world that gave us El Greco; and the recovery of learning in another mediaeval society.

6, The poetry of Byzantium (much of it religious, some of it trying to recover the Hellenic world and the world of Greek philosophy, and later poetry continuing the Byzantine cultural expressions under Frankish and Ottoman occupation) and Byzantium in literature and poetry today (Yeats, Cavafy, Dalrymple, even Leonard Cohen).

I am then taking a break: I shall not be here on Monday 23 February: instead I’m travelling through the Byzantine world for 10 days, visiting Athens, and then on to Alexandria, Cairo and Mount Sinai, and working on a documentary video on Muslim-Christian dialogue.

Then it is back again on 1 March for three further sessions:

7, Byzantine theology and Church life; Councils of the Church; schisms and heresies; iconoclasm; the intrigues in the Patriarchates.

9, The other Byzantiums: Alexandria, Jerusalem, Damascus: the world of William Dalrymple in the past and today.

11, Where to find Byzantium today: the legacy and the heritage, Athens, Thessaloniki, Mystras, Alexandria, Mount Athos.