Byzantine Studies, Kilkenny, 2004:
4: Heroes, anti-heroes and the
women of Byzantium:
some biographical sketches 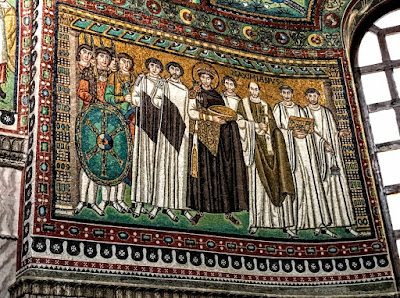 The Court of Justinian in a mosaic in San Vitale, Ravenna (Photograph: Patrick Comerford)

4, Heroes, anti-heroes and the women of Byzantium: some biographical sketches

We have already discussed this morning to the Emperor Constantine and his rile in building or rebuilding the City of Byzantium and moving the capital of the Empire there.

For the rest of his morning, I want to introduce to some of the heroes, anti-heroes and women of Byzantium.

Justinian (527-560):
• Succeeded in restoring order to a state riven by social and religious strife (notably the Nika riots in 532).

• His military campaigns restored the Empire to its former borders, but at a crippling price.

• Oversaw sweeping reforms in the law.

• Renovated and reconstructed the cities of the Byzantine Empire.

• Above all, he created the architectural masterpiece that is Aghia Sophia.

• Founder of the Heraclid dynasty.

• Reorganised the defences of Byzantine Egypt.

• Forced the Persians to retreat from Egypt, which they had conquered.

• Fought the first ‘Holy War’ to reclaim Jerusalem and the ‘True Cross.’

• Promoted the Hellenisation of the empire.

• Launched a crusade against icons.

• And so split the Empire in two.

• The last emperor of the Macedonian dynasty.

• Excelled as a military leader.

The women of Byzantium.

Helen, or Helena, the mother of the Emperor Constantine:

Helen stands at a turning point in history. After years of persecution under the Roman Empire, Christianity had become respectable and the mainstream religion. Helena is linked firmly with the story of the new Empire and its new state religion.

Helen was born in 248 in Drepanum, later known as Helenopolis, in Bithynia in Asia Minor. The church historian Philostorgius says she was ‘a common woman not different from strumpets’. Later she would become the mother of an emperor, a divorcee, a pilgrim, a souvenir hunter, and a saint.

In the year 270, she married Constantius Chlorus, who came from a lowly background but was an up-and-coming young officer in the Roman army. Religiously, he was attracted to the cult of Mithras.

In 289, Constantius became of the Caesar of the western empire, and with this new status promptly ditched Helen for a more socially acceptable wife, divorcing her and marrying Theodora, step-daughter of the Emperor Maximian. At this stage, Contantine was a 17-year-old. When his father died in York in 306, the soldiers proclaimed Constantine as Emperor, and soon after he was probably joined by his mother as he moved his official residence first to Trier and later to Rome.

Consantine’s conversion on Milvian Bridge on 28 October 312 is a key date in the story of the Byzantine secular and religious world. The cross appeared against the sun, and he is said to have heard the words ‘In hoc signo vinces.’ Although, surprisingly, Constantine was not baptised until shortly before his death in 337, became a Christian at an early stage.

In the year 326, she visited the Holy Land, where she where she founded basilicas on the Mount of Olives and in Bethlehem. According to later tradition, she also discovered the True Cross on which Christ had been crucified, and in Eastern Orthodoxy she is often represented holding the cross with her son Constantine. She died in 330 and is buried in Rome, rather than in Constantinople, yet she remains one of the principal women saints respected in Orthodoxy. In Orthodox iconography she is usually seen with her son, the two holding the True Cross between them.

From an early stage, women were a force to be considered in the politics of Byzantium. Eudoxia is the first in a long line Byzantine Empresses whose names were to become bywords for luxury and sensuality – she was said to wear a fringe low over her forehead, the trademark of a courtesan.

Pulcheria was only 15 when she was proclaimed Augusta in 414. But in contrast to Eudoxia, she combined her lust for power with excessive piety, and was said that her palace was more like a cloister than a court.

Perhaps the most amazing of all the empresses, who managed to match her earlier sexual exploits with her later lust for power, was Theodora, wife of the Emperor Justinian I.

Justinian I, who built the great basilica of Aghia Sophia and codified the law of the empire, was a champion of Orthodoxy, but should also be remembered by women as the emperor whose law weakened the power of the father in the family and favoured a wife against her husband.

Justinian’s reforming zeal seems to have been inspired at many points by his wife Theodora I, who was crowned as his co-regnant Empress in 527. She exercised great influence on the theological controversies of the time, seeking to conciliate the Monophysites.

But earlier in his career, Justinian was not regarded as having found an ideal match when he first fell for Theodora. Her father had been a bear keeper in the Hippodrome and her mother an acrobat. While still a child, Theodora had joined her elder sister on the stage, playing in farce and burlesque, and before long she had become Constantinople’s most notorious courtesan. In surely one of the most outspoken pieces of vilification ever directed against a queen or an empress in all history, her contemporary Procopius wrote:

‘When Theodora was still too immature to sleep with a man or to have intercourse like a woman, she acted at night like a male prostitute to satisfy those dregs of humanity who remained some considerable time in a brothel, given over to such unnatural traffic of the body … But as soon as she reached maturity she became a harlot. Never was a woman so completely abandoned to pleasure. Many a time she would attend a banquet with ten young men or more, all with a passion for fornication and at the peak of their powers, and with lie with all her companions the whole night long; and when she had reduced them all to exhaustion she would go to their attendants – sometimes as many as thirty of them – and copulate with each in turn; and even then she could not satisfy her lust. And although she made use of three apertures in her body, she was wont to complain that Nature had not provided her with larger openings in her nipples, so that she might have contrived another form of intercourse there.

‘Often in the theatre too, in full view of all the people … she would spread herself out and lie on her back on the ground. And certain slaves whose special task it was would sprinkle grains of barley over her private parts; and geese trained for the purpose would pick them off one by one with their beaks and swallow them.’

Theodora and Justinian were married in Aghia Sophia 525, and two years later were crowned co-Emperor and Empress.

During the so-called Nika rebellion, when Justinian was on the verge of running away, it is said Theodora stopped him and told the frightened emperor: ‘I do not choose to flee. Those who have worn the crown should never survive its loss. Never shall I see the day when I am not saluted as empress. If you mean to flee, Caesar, well and good. You have the money, the ships are ready, the sea is open. As for me, I shall stay.’

In another account she says: ‘If you my Lord, wish to save your skin, you will have no difficulty in doing so. As for me, I stand by the ancient saying: the purple is the noblest winding-sheet.’

The emperor stayed and put down the rebellion.

Judith Herrin, in her book Women in Purple: Rulers of medieval Byzantium, tells the stories of three further imperial wives who stand out above many others: Irene, wife of Leo IV (775-780); Euphrosyne, wife of Michael II (820-829); Theodora, wife of Theophilos (829-842).

They had power, first through their husbands, and then, as widows, still wearing the imperial purple, through their sons. Although she is not mentioned in many standard Western reference works, Irene stands out even today in Greek minds as the Empress who triumphed in the iconoclastic controversy. On the whole, the imperial women and perhaps women throughout the Empire were in favour of the veneration of icons. This was one of the ways in which they could be spiritually active in a Church that excluded them from leadership in its official activities than did the Church in the West.

After the death of her husband, Leo IV, the Empress Irene was co-regent for her son and reversed the policies of her predecessors who had declared that icons were idols and had to be destroyed. Irene dramatically pursued the iconophile cause and had her own son blinded to secure her power. She called the second Council of Nicaea in 787.

Ten years later, in 797, Irene gained power after having her son – the rightful but incompetent heir – blinded in the very room in which she had given him birth. Irene then became the first woman to rule the empire in her own name. She could neither win widespread support for her pro-icon policies, nor could she put together a marriage alliance with the newly proclaimed western emperor Charlemagne, a union that would have brought east and west together. As Irene spent the treasury into bankruptcy, her enemies increased. Finally, in 802, they deposed her and exiled her to the island of Lesbos.

The story of Irene’s granddaughter Euphrosyne, wife of Michael II (820-829), emphasises the interesting questions about role played by the leading women in the controversies over icons in of Byzantium. She was brought back from exile to legitimise the usurping iconoclast emperor

Theodora, wife of the Emperor Theophilos (829-842), was chosen by her husband in a bride show organised by his stepmother Euphrosyne, Having reaffirmed once and for all the traditional role of icons in the Christian East, she too is celebrated as an Orthodox saint, and her victory in the controversy in the year 843 is celebrated as ‘The Triumph of Orthodoxy,’ commemorated in a special service on ‘Orthodox Sunday,’ the first Sunday in Lent.

From their own Queen City, these empresses governed Byzantium like men, conducting diplomacy across the known world, negotiating with Charlemagne, Roman Popes and the great Arab caliph, Harun al-Rashid.

Ever since Edward Gibbon, in the Decline and Fall of the Roman Empire, dismissed the emperors of Byzantium as effeminate rulers, the west has never fully understood either these heroes or these heroines. Mind you, as Judith Herrin points out, no records were left by these women themselves, recording their own thoughts, likes or sayings. They have come down to us in story as a social and political force, but not as intellectual force.

5, Byzantine culture: The architecture and the art of Byzantium: the world of Aghia Sophia and the world that gave us El Greco;

6, Literature and the Arts: The recovery of learning in another mediaeval society; the poetry of Byzantium; Byzantium in literature and poetry today: WB Yeats, CP Cavafy, William Dalrymple, even Leonard Cohen.