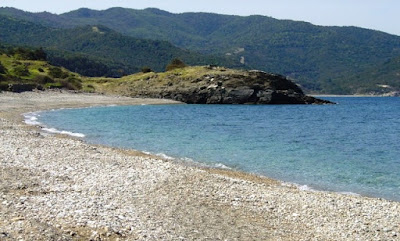 Scenes of Mount Athos: the wildlife and beaches remain unspoiled ... 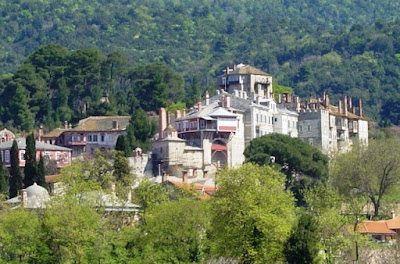 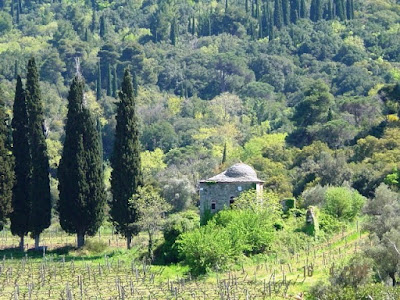 ... small hermitages and monasteries are almost hidden in the landscape (Photographs: Patrick Comerford, 2004)

The monks of the theocratic republic of Mount Athos resolutely defend their isolation – and the complete exclusion of women, writes Patrick Comerford

Mount Athos, in eastern Macedonia, is one of the most isolated parts of Greece, and reaching the peninsula is difficult, even for the most determined pilgrims. There is no direct road access from the Greek mainland and there are strict limitations on who can board the two ferries that ply daily from the small ports of Ouranóupoli and Ierissós to the coastline of this monastic mountain.

The monks of Mount Athos robustly defend their isolation and autonomy, and the number of arrivals is strictly limited each day. Most visitors may stay for only three or four days, and non-Orthodox visitors must demonstrate a genuine interest in Orthodoxy, theology or Byzantine studies before receiving a special permit. Known to Greeks as Ághion Óros, or the Holy Mountain, Mount Athos is a monks’ republic whose autonomy has been guaranteed for generations and is written into Greek constitutional law. Since 1926, Mount Athos has had the unique status of a theocratic republic, with its own government, elected by the 20 monasteries on the mountain.

There are no roads connecting the Holy Mountain with the rest of Greece, ensuring its continuing isolation. Sailing from Ouranóupoli or Ierissós, visitors have a feeling of leaving the world behind. Visas and passports are checked thoroughly before the two-hour journey, and large signs at both ports warn visitors to Mount Athos that the entrance of women and the approach of visitors and crafts without special permits are “entirely forbidden”, and that “any violation” of these prohibitions “involves serious penal sanctions”.

Since 1060, when the Byzantine emperor, Constantine IX, issued a decree banning women from living on or even visiting the peninsula, the population of Mount Athos has been exclusively male. The ban extends even to female animals – with the single exception of cats, which are needed to control rodents. Isolation has its benefits: because tourism and industry have made no inroads, the ecosystem and wildlife of Mount Athos are unspoiled. There are few paved roads, just a handful of trucks and buses, and no electricity pylons or telegraph poles. Beaches that any travel brochure would boast of have not been blighted by beach bars, banana boats or sunbathers. 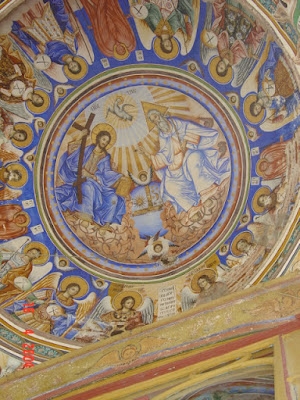 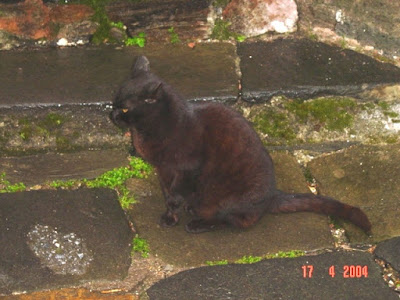 At Vatopedi, the feeling is of a traditional Greek village ... 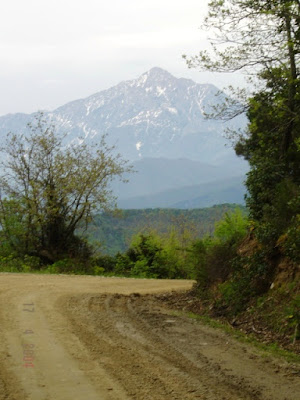 Each of the 20 monasteries on Mount Athos has its own atmosphere and ethos, and the peninsula is speckled with smaller monastic dependencies, small houses and solitary hermitages. Although 20,000 monks were living on the Holy Mountain in its heyday, monastic life reached its lowest level in the 1960s, when numbers dropped to barely 1,000. In the past decade, however, there has been a dramatic revival, so that today there are more than 2,000 monks, with new young novices arriving in large numbers at monasteries such as Simonopetra, Philotheou and Vatopedi, along with a growing number of pilgrims.

This revival is hard to imagine at Esphigmenous, where even Orthodox visitors find anything but a warm welcome. At the strictest foundation on Athos, the monks have revolted against the authority of the Patriarch of Constantinople because of his ecumenical reputation, and daring monks have hung out a banner greeting visitors with the slogan “Orthodoxy or Death”.

By contrast, Vatopedi, a three-hour walk away, is Athos’s most welcoming monastery. Once described by Osbert Lancaster as “the Christ Church of Athos”, Vatopedi is like an intimate, hospitable Greek village with its cobbled courtyard, cascading buildings, hanging balconies and gently ageing belltowers and fountains. Vatopedi was facing serious decline a decade ago but has recently doubled its numbers to 90 monks, making it one of the fastest-growing monasteries on the peninsula – a revival which has confounded those who predicted that monastic life on the mountain was in terminal decline. 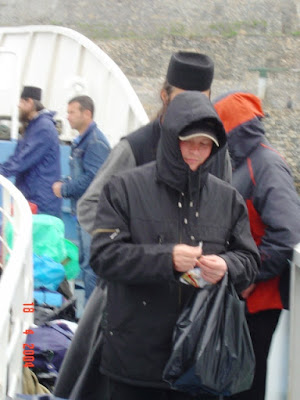 At Vatopedi, pilgrims are welcomed ... 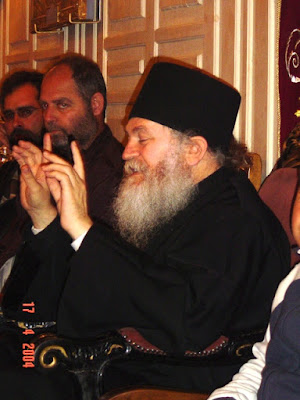 ... by Abbot Ephraim, one of the leading figures in the revival of the monastic tradition (Photographs: Patrick Comerford, 2004)

The welcome at Vatopedi is an exuberant expression of traditional Greek hospitality. Guests are warmly greeted by the guestmaster with a glass of raki and large dollops of loukoúmi – known to most Irish people, unfairly, as “Turkish delight” – and any efforts to pay for bed and board are politely spurned. At some monasteries, the monks are said to leave visitors standing in the rain outside the main church and the refectory and send them packing early in the morning. But at Vatopedi, pilgrims are welcome to take part in the liturgy with the monks and invited to dine with them in the refectory.

Staying at a monastery is no easy escape from the secular world. The monks follow the Julian calendar, which is a fortnight behind the rest of the world, and the clocks keep an eccentric Byzantine time - although the monks' wristwatches are more worldly. Each morning I was woken at 3 a.m. by the call that “Christ is Risen” to join the monks for Morning Prayer, followed by the Liturgy of the Eucharist. Only much later, at 7.30 a.m., is breakfast served: generous portions of cheese, bread, olives, beans, eggs, and even a glass of wine, as a monk reads from scripture and delivers a short homily.

As the monks pray and work during the day, pilgrims can easily find time to read, pray and be silent. The call to prayer comes again at 4 p.m. with Vespers, and later, after a simple dinner that bears a marked similarity to breakfast, the monastery’s relics and special icons are put on display. Without a hint of doubt, Father William, an American-born monk, points out portions of the True Cross, the girdle of the Virgin Mary entrusted to the apostle Thomas at her Dormition, the skull of St John Chrysostom, with a blackened ear still attached, and the skull of St Gregory Palamas, the 14th-century monk who became Archbishop of Thessaloniki.

During my stay, Greek businessmen taking their sons on their first pilgrimage questioned me about the ordination of women and the consecration of gay bishops. Villagers from Cyprus could not understand why a priest visiting the Holy Mountain was not wearing a cassock. A group of Romanian seminary students gently tried to convert me to Orthodoxy. There was a handful of Russians, Ukrainians and Bulgarians, and a small party of Greek-Americans. But everyone left me with time for prayer and solitude.

On the ferry back to Ouranóupoli, I gazed up at the onion domes and copper roofs of Panteleimon, the last Russian monastery on Mount Athos, but was starkly interrupted by a reminder of ugly reality from the outside world. A group of Serbs, who had visited Chilandar despite a devastating recent fire, wondered why the new Europe was forgetting their plight and failing to embrace Serbia. Mount Athos was no retreat from worldly politics. 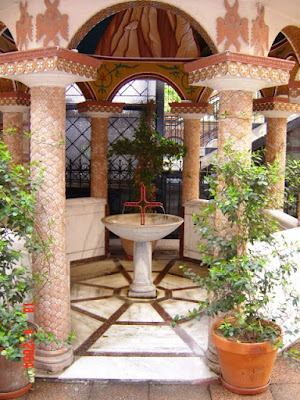 A fountain inside a monastic courtyard in Thessaloniki (Photograph: Patrick Comerford, 2004)

This feature was first published in ‘The Irish Times’ on 19 June 2004.