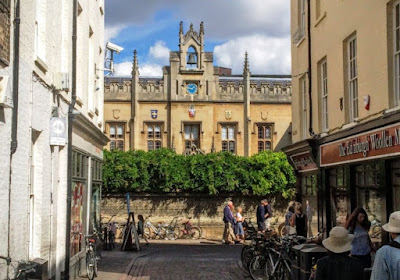 The bell of the Chapel of Sidney Sussex College seen from Green Street, Cambridge … the college was a ‘Puritan’ foundation but responded positively to the Anglo-Catholic movement in the 19th century (Photograph: Patrick Comerford, 2016)

The chapel in Sidney Sussex College Cambridge, where I am staying this week, is closed for repairs, and I have not been inside for the duration of this week’s conference organised by the Institute for Orthodox Christian Studies.

Although Sidney Sussex was founded as a ‘Puritan’ college in the late 16th century, the college responded positively to the rise of the Anglo-Catholic movement in the 19th century. The college chapel, built in 1600, rebuilt in 1782 and again from 1912 to 1923, was refashioned in the Edwardian era, with brown oak stalls and panels, marbled floors, a bronze and marble altar, and decorative barrel vaulting. Today, it is one of the finest and most elaborate modern Catholic-style chapels in Cambridge.

A pioneering 19th century Anglo-Catholic from Sidney Sussex was the Revd Thomas Pelham Dale (1821–1892), who was jailed for his ‘ritualistic’ high church practices.

Dale grew up in Beckenham, Kent. After attending King’s College, London, he went up to Sidney Sussex College, Cambridge, where he was admitted as a ‘pensioner’ on 30 June 1841 and matriculated in Michaelmas term.

He graduated BA in 1845 as the 25th Wrangler. The Wranglers are those students at Cambridge who gain first-class degrees in mathematics. The Cambridge undergraduate mathematics course, or Mathematical Tripos, is famously difficult. The Senior Wrangler is the top mathematics undergraduate at Cambridge, a position that has been described as ‘the greatest intellectual achievement attainable in Britain.’

Dale was immediately elected a Fellow of Sidney Sussex College in 1845. He was ordained deacon that year by Charles Sumner, Bishop of Winchester, and was ordained priest in 1846.

His first appointment in 1845 was as curate of the Camden Chapel, Camberwell, Surrey. The Camden Chapel on the north side of Peckham Road had opened in 1797 as a Protestant Dissenting Chapel, and became an Anglican chapel in 1829. But it had only become a parish church within the Church of England in 1844.

Dale resigned his fellowship at Sidney Sussex in 1847 when he was appointed the Rector of Saint Vedast’s in Foster Lane with Saint Michael’s-le-Querne in the City of London. He received his Cambridge MA in 1848, and continued his scholarly scientific and theological interests, so that he was the librarian of Sion College in the City of London from 1851 to 1856.

In 1861, with Archibald Tait, Bishop of London and later Archbishop of Canterbury, Elizabeth Catherine Ferard (1825-1883), who was related to Dale by marriage, and two other women, Dale founded the North London Deaconess Institution, based in King’s Cross. Dale wanted to establish a women’s society to work among the poor, but one that was more flexible than a structured religious order.

Dale was also a considerable Hebrew scholar, and he was the author of A Life’s Motto (1869) and A Commentary on Ecclesiastes (1873).

Less than three months after becoming Dean of Rochester, Thomas Dale was visiting his son at No 2 Amen Court, Saint Paul’s, London, when he died suddenly on 14 May 1870.

Like his father, Dale was originally an evangelical. However, he came to believe that ritualism was specifically appropriate to deal with the nature of secularism and the forces he saw as hostile to Christianity of the time. He began to use the mixed chalice and to wear Eucharistic vestments at Christmas 1873.

Opposition to Dale crystallised around his ritualism, and grew when he offered locum tenens ministry in 1875 to the congregation of Saint Alban the Martyr, Holborn, while the Revd Alexander Heriot Mackonochie was suspended for his ritualist practices.

In 1876, Dale was prosecuted under the Public Worship Regulation Act 1874. He was supported by the English Church Union in his prosecution by the Church Association. In the same year, he joined the Society of the Holy Cross.

On 12 November 1876, John Jackson, Bishop of London, enforced an inhibition obtained from the Court of Arches, and insisted on taking over the services at Saint Vedast’s. Dale submitted for the time, but legal flaws were discovered in the case of the prosecution. Amid much correspondence, public and private, Dale renewed the services, and ignored the citations, summonses, admonitions, inhibitions, and other documents with which he had been served and in December 1878, he recommenced all his former practices.

After protracted legal proceedings, another judgment was obtained against him from the Dean of Arches, Lord Penzance, in the Court of Arches on 28 October 1880. Two days later, Dale was arrested and he was sent to Holloway prison on 30 October 1880.

Dale’s imprisonment drew great sympathy from all but his most die-hard opponents. Such imprisonments did more than anything else to turn public opinion against Disraeli’s attempt to use the law to put down ritualism.

Dale was released on bail on Christmas Eve 1880, and in January 1881 he was entirely released by order of the Lords Justices, who held that the writ of inhibition was bad, because its issue had not been reported to the Court of Queen’s Bench. A protracted case that had excited extraordinary attention had been had come to an end.

Soon after his release, Dale was presented by the patron, Charles Trollope Swan, to the living of Sausthorpe-cum-Aswardby, near Spilsby in Lincolnshire, and he was instituted on 21 April 1881.

In his rural rectory, Dale resumed his Hebrew and scientific studies and his water-colour painting. Several of his paintings, made on in Padua and Venice on a tour of Italy in 1882, were reproduced in his biography by his daughter.

Dale died at Sausthorpe Rectory on 19 April 1892, on the eleventh anniversary of the death of Disraeli, one of the architects of the Public Worship Regulation Act 1874. He was buried in Sausthorpe churchyard.

The Church really needs to come clean and publically atone for its part in invoking despicable law, contrary to moral code and decency. It has escaped historical self- and public censure for far too long. it owes a debt of atonement to non-conformists, and to the Irish Roman Catholics for its imperious dictates and its hardly forgivable imposition of tithe taxation. If truth and reconciliation were a football match, it would hardly field a team.