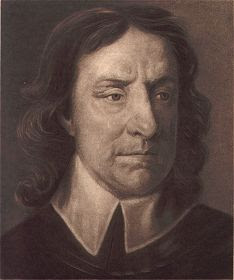 Oliver Cromwell … an alumnus of Sidney Sussex. But is he buried in the college chapel?

When I was travelling as a journalist with The Irish Times, I often tried to find an Irish angle to add a bit of colour or charm to my writing. There was the Irish priest in Cyprus who spent a lot of his working time on weddings; the Wild Geese buried in far-flung fields, such as the Irish general buried in the corner of a cemetery in Athens; or the Irish missionaries working in Far Eastern countries such as China, Hong Kong, Japan and Korea.

This is my second year to stay at Sidney Sussex College, Cambridge. And each time friends from Ireland ask not is this the Cambridge college where Brian Lenihan studied law, but is this is the college where Oliver Cromwell’s head is buried?

We all accept the good reason for the Irish obsession with Cromwell. But Cromwell was once an undergraduate at Sidney Sussex, although he never finished his degree, and he is hardly the sort of man who would have delighted in the thought of his head becoming a “first-class relic.”

So, is the head of Oliver Cromwell’s head buried beneath the chapel floor in Sidney Sussex?

It is almost half a century since Dr Horace N.S. Wilkinson, an anaesthetist, donated a cranium to Sidney Sussex, claiming it was Cromwell’s head. The head was buried in the grounds of Sidney Sussex College on 25 March 1960, but the college keeps the precise location of this burial a secret.

Cromwell entered Sidney Sussex College as a fellow commoner in 1616, a few days before his 17th birthday. But very little is known of his year here. He came up to Sidney Sussex on 23 April 1616, the day William Shakespeare died. But we do not know why he entered Sidney Sussex, rather than Queen’s, where his father and uncle had been students. Even his entry in the college admission register cannot be read without reference to much later events.

It was said at the end of the 18th century that Cromwell’s room was “in the back court, middle staircase” – in other words on H staircase in Chapel Court, where I am staying this week. However, there is no contemporary evidence for this, and this part of the building may not have been built until about 1630.

During Cromwell’s days here, the Master of Sidney Sussex was Samuel Ward, a noted Calvinist theologian, one of the translators of the King James Version of the Bible, and an English delegate at the Synod of Dort in 1618. By then, Cromwell had left Cambridge without taking a degree after his father’s death in 1617.

When Cromwell died on 3 September 1658, he was given a state funeral in Westminster Abbey, and the spot where he was buried is still marked on the abbey floor. But how did his head come into Dr Wilkinson’s possession? And who could possibly prove that this head was Cromwell’s?

Although Sidney Sussex was a Puritan foundation, Sidney’s Master and Fellows supported Charles I during the English Civil War, and succeeded in sending £100 to the king in support of the royalist cause. Nevertheless, Cromwell had King Charles I beheaded in 1648. When Cromwell died in 1658, he was given a splendid funeral that was based closely on that given to Charles I’s father, James I, and he was embalmed and buried among the kings in Westminster Abbey.

But Charles I’s son, Charles II, was restored to the throne in 1660 he had Cromwell reburied by the gallows on Tyburn Hill. Around this time, Cromwell’s entry in the admission register at Sidney Sussex was altered with the addition of an emphatic Latin explanation that begins “Hic fuit grandis ille impostor, carnifex…”:

“This was that great impostor, that most accursed butcher, who when the most pious King Charles I had been disposed of by foul murder, usurped the throne itself, and for the space of almost five years, under the name of Protector, tormented the three kingdoms with unrestrained tyranny.”

Then on 30 January 1661, Cromwell’s body was exhumed, taken out of its coffin, hanged and decapitated. It took eight axe strokes to cut off Cromwell’s head, which was covered with several layers of grave clothes. The severed head was then stuck on a spike on the top of Westminster Hall, where it remained for at least 24 years.

Between 1684 and 1710, it is difficult to trace with certainty any accurate record of what happened to this head. According to tradition in Dr Wilkinson’s family, a high wind on a stormy November night eventually blew Cromwell’s head off the pole in 1688. Private Barnes, a solider in Lord Arlington’s regiment, was the sentry on guard and he secretly carried the gruesome head home and hid it in his chimney.

It is said that Barnes on his deathbed in 1702 disclosed his secret to his wife and daughter. They appear to have then sold the head to Claudius Du Puy, a French-Swiss calico printer who also ran a museum of freaks and curiosities.

A German traveller, Zacharias Conrad von Uffenbach, reportedly saw Cromwell’s head in Du Puy’ show in 1710. There it was part of a ghoulish collection of marine monstrosities, idols, waxworks, musical instruments and strange footwear. When Du Puy died in 1738, it seems the head was returned to the Barnes family and eventually passed to Samuel Russell, “a dissolute, drunken and impecunious comedian” who married Private Barnes’s granddaughter.

Russell tried to sell the head around 1775 to Dr William Elliston, who was the Master of Sidney Sussex College (1760-1807), but Dr Elliston rebuffed him, fearing the head “might create some prejudice against him.” And yet, almost a decade earlier, in 1766, he had accepted a pastel portrait of Cromwell – “warts and all” – by Samuel Cooper from the eccentric republican Thomas Hollis.

This portrait still hangs in the Hall in Sidney Sussex, where I am eating my meals each day. However, this pastel portrait is very vulnerable to light, and it was often covered with a curtain – giving rise to the popular myth that Cromwell’s face was always covered during the Loyal Toast at dinner.

Eventually, James Cox, a London jeweller and moneylender, paid £118 for the head in 1787. Twelve years later, he sold it for £230 to three speculators, the Hughes brothers. They then exhibited Cromwell’s head in Old Bond Street, London, charging viewers half a crown (2/6). Their business eventually collapsed, but the Hughes family held onto the head, and in 1814 Josiah Henry Wilkinson bought the relic from the daughter of the last surviving Hughes brother.

Maria Edgeworth describes seeing the head in 1822, and the Wilkinson family, who kept the head in a velvet-lined box for almost a century and a half, often showed it to their visitors – one visitor even described how it was shown off after breakfast.

Eventually, requests from the press and historical researchers became too wearisome for Dr Wilkinson, and he offered Sidney Sussex a second chance to acquire the head of its most famous alumnus. In a secret ceremony, the head was buried in an unknown location beneath the floor of the ante-chapel, following a brief funeral service conducted by the college chaplain in the presence of only the Master, Dr David Thompson, three fellows, Wilkinson and his sister.

But can we be certain that this was Cromwell’s head?

From 1684 to 1710, there is no hard evidence of the whereabouts of Cromwell’s head. And there is a further gap between 1710 and 1775, when no-one describes seeing it. These gaps would raise serious questions about the provenance of a work of art, for example. If I wanted to determine whether the portrait of Cromwell in the Hall in Sidney Sussex is by Samuel Cooper or Sir Peter Lely, certain proof would be possible through a thorough forensic examination of the painting, examining brush strokes, the materials used and comparing the painting with similar works by each artist.

Without these thorough investigations, no-one would accept my conclusions. Yet, no-one knows precisely where Cromwell’s supposed head has been buried. Only a handful of people witnessed the secretive and furtive burial, and the plaque in the ante-chapel at Sidney Sussex is decidedly vague about the location of burial.

The plaque in the ante-chapel in Sidney Sussex College, Cambridge (Photograph; Patrick Comerford)

The plaque states simply: “Near to this place was buried on 25 March 1960 the head of Oliver Cromwell Lord Protector of the Common-wealth of England, Scotland & Ireland, Fellow Commoner of this College 1616-7.”

In addition, no-one can now carry out DNA or other forensic tests on the head. It may be a skull from Cromwell’s time. It may even be the skull of someone who was decapitated after death. But is it Cromwell's skull? And even if it is, would you want it buried in your church or college chapel?

Posted by Patrick Comerford at 13:57

I'm sitting in King's College having just read your fascinating account of Cromwell's Head - very interesting! I shall have to pop into Sidney to have a look some time!

Why do you say that DNA tests cannot be carried out on the alleged head? Surely the burial place is not so large that the head cannot be located. If the authorities of the college give approval, it could be disinterred and tested.

"the popular myth that Cromwell’s face was always covered during the Loyal Toast" - it's not a myth.