A walk along the shoreline in Bray 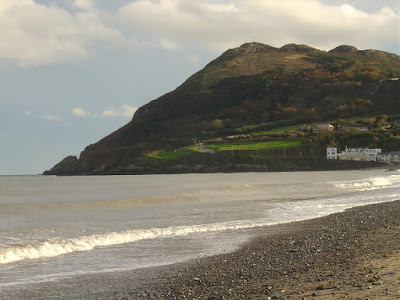 This week’s battery of tests in hospital has left me feeling a little tired, if not exhausted. There were lung tests in the pulmonary laboratory, three or four X-Rays on my lungs and on my knees, and consultations with a lung specialist and with a nurse.

I don’t know if the waiting or the tests were more demanding. Now I have to wait a week to learn how I’m getting on with sarcoidosis. There’s a possibility that I picked up a viral infection on my lungs, and my knees haven’t felt the best for over a year now.

But I’m not going to let this get me down. So I decided to finish early today, and headed off for a late lunch in Palazzo (http://www.palazzo.ie/), a seafront Italian restaurant in Bray, Co Wicklow, followed by a brisk walk along the shoreline.

I imagine most people who live in Bray think of themselves as being from Dublin. Although the town is in Co Wicklow, in mediaeval times it was within the Pale, and the area was governed directly from Dublin Castle because it was so close to areas under the control of the O’Toole and O’Byrne chieftains and their clans.

Local legend says that Oliver Cromwell stayed in Bray 360 years ago on his way from Dublin to Wexford in August or September, 1649. But Bray was still a small fishing village in the 17th and 18th centuries. At that time, many of the Prebendaries of Rathmichael in Saint Patrick’s Cathedral, Dublin, were also the Vicars of Bray.

In the latter part of the 18th century, the Dublin middle classes began to move to Bray in order to escape city life. This move in population gathered steam when the first railway line in Ireland, the Dublin and Kingstown Railway, opened in 1834 and was extended to Bray in 1854. 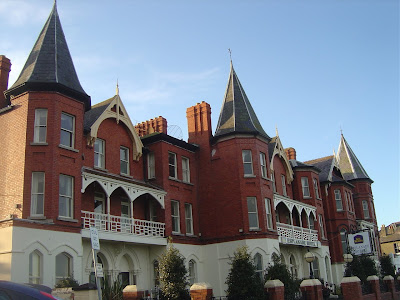 The railway helped the development of Bray as a seaside resort in the latter half of the Victorian era (Photograph: Patrick Comerford, 2009)

In the decades that followed, the railway line helped to see the town grow into Ireland’s largest seaside resort. Many of the hotels on the Promenade date from the Victorian era, and my great-grandfather’s first cousin, Richard Lynders of Balcarrick, Donabate, and his wife Harriet (née Egan) spent their honeymoon in Lacy’s Bray Head Hotel in February 1891.

When my parents married in 1945, their first house was in Putland Road, Bray. By the 1950s and 1960s, Bray's seafront was crowded with cheap amusement halls, yet in my early teens I enjoyed the thrill of the “bumpers.”

Although Bray has declined as a resort since the 1960s, the town is Ireland’s ninth largest today, with a population of about 32,000.

The comments by the Minister for Finance, Brian Lenihan, in the Dail today may indicate that the recession has started to bottom out. But the recession has added to the feeling of fading grandeur along the Victorian Promenade in Bray. I imagine that with the bad news about Irish hotels in the last 24 hours, many hotels, bars and restaurants in towns like Bray must be wondering about their future prospects. 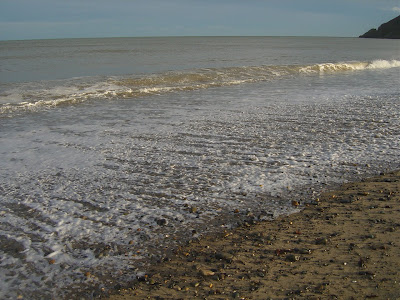 The sea air in Bray was good for my body, soul and spirit ... and for my lungs ... this afternoon (Photograph: Patrick Comerford, 2009)

But today was a good day for a brisk stroll along the Promenade and then down onto the mile-long beach, walking south towards Bray Head. The heavy rain over the last 24 hours had taken a break, and the post-showers light meant Bray Head took out in sharp relief with clear colours. Then it was back north along the shore, taking in the panoramic views towards Dublin Bay, before strolling along the Promenade, past the Victorian hotels, villas and terraces.

Whatever my tests results may show next week, the sea air was good for my body, soul and spirit this afternoon. I may have sarcoidosis, but sarcoidosis does not have me.
Posted by Patrick Comerford at 17:37