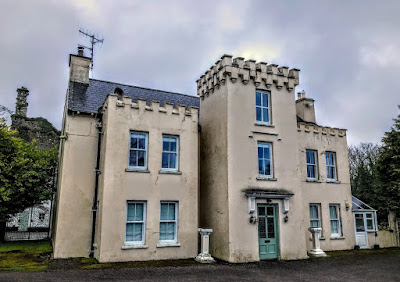 During my visit to Cork and Cobh at the end of last week, I also visited Wallstown Castle near Castletownroche and Doneraile, which has once been the home of my great-uncle, Jeremiah Crowley, and had remained a family home for my grandmother’s brother and his family for the best part of a century.

This was my first time to visit Wallstown Castle, which stands in the middle of farmland in the River Awbeg valley in Castletownroche, near Ballynamona, Co Cork. The River Awbeg flows past the east boundary of the property.

Wallstown Castle was built in the 13th century, and takes its name from the Wall family, who lived there for centuries. During the Irish Confederate Wars, the castle was captured by Lord Inchiquin in 1642. The castle was burned down and most of the castle occupants were slain. Richard Wall was captured and later died in Cork prison. 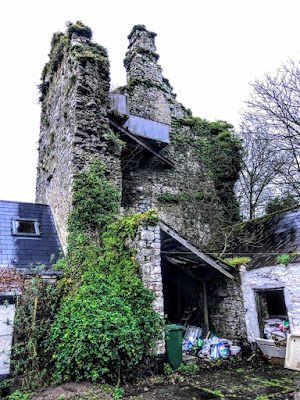 Wallstown Castle was the home of the Wall family from the 13th century until 1642 (Photograph: Patrick Comerford, 2020)

After the Cromwellian invasion of Ireland, the castle was granted to Captain Andrew Ruddock, whose tomb can still be seen in the cemetery of the ruined church on the castle grounds.

Later, Wallstown Castle passed by marriage to the Creagh and Stawell family. It was leased to Thomas Bailey in 1836 and was held by Charles Bailey from Thomas Bailey at the time of Griffith’s Valuation, when it was valued at £7.18.00.

The castle was bought in 1858 by John McCormick of Dublin, who added the battlements to the house ca 1860. 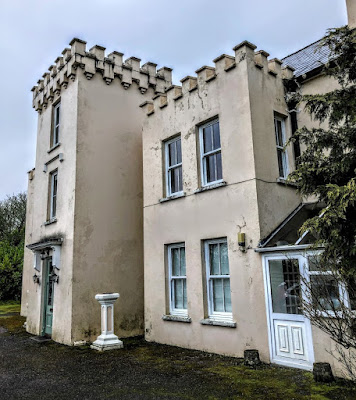 Wallstown Castle was bought around 1918 or 1920 by my great-uncle Jeremiah Crowley (Photograph: Patrick Comerford, 2020)

For many years, Jerry and Con Crowley were directors of the Roscrea Meat Company – the other directors included Robert Briscoe TD and G Fasenfeld.

Almost a decade before he bought Wallstown Castle, Jerry Crowley married Julia Maria Murphy, a daughter of John D Murphy, a shopkeeper, of Coomlegane, Millstreet, on 30 June 1910 in Cork Cathedral, which I visited last week. The witnesses at the wedding were Timothy Twomey and Hanna M Murphy.

The wedding reception was held at the Metropole Hotel, Cork, and a family photograph shows my grandmother at the wedding. 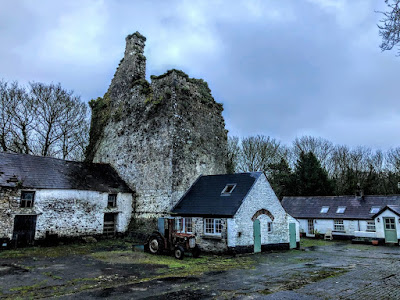 Jerry and Julia Crowley later moved into Wallstown Castle, and the Irish Tourist Association reported in 1940s that he ‘lives in a grand mansion near the ruin of the old castle.’

As I was growing up, we referred politely to the daughters of Jerry and Julia Crowley – my mother’s first cousins Joan, Margaret, Mary, Sheila and Ita – as aunts. Ita’s funeral took place some years ago in Saint Colman’s Cathedral, Cobh, which I also visited last week.

The mediaeval Wallstown Castle is a ruined, fortified four-storey tower house. The west wall, with a prominent chimney stack, is the tallest part of the structure that remains.

The entrance to Wallstown Castle includes rendered piers connected by rendered curving walls. The castle is a rare example of continuity of settlement from mediaeval times to the present and forms an interesting historic ensemble. 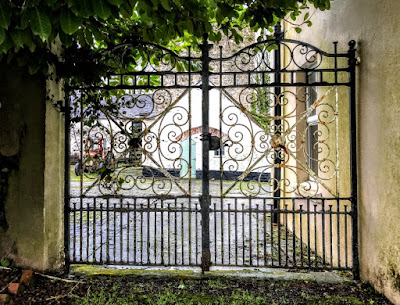 The castle ruins are in the courtyard of house built by the Ruddock family (Photograph: Patrick Comerford, 2020)

The castle ruins are in the back courtyard of the later new house built by the Ruddock family ca 1780, and the whole property has been known since as Wallstown Castle.

The 18th century house at Wallstown Castle is a five-bay, two-storey house, with square-plan embattled projections added ca 1860 to the front of the house.

The middle entrance is single-bay and three-storey, while the end projections are two-bay and two-storey. A two-storey lean-to addition runs the full length of the rear of the house.

The house pitched slate roof, while the extension at the rear has a later pitched roof.

The square-headed entrance doorway has a moulded render cornice supported on brackets, and a timber panelled door with leaded glazing. The first-floor window above the front door has rendered label-moulding.

There are square-headed window openings throughout the house, with some one-over-one pane timber sliding sash windows still surviving. 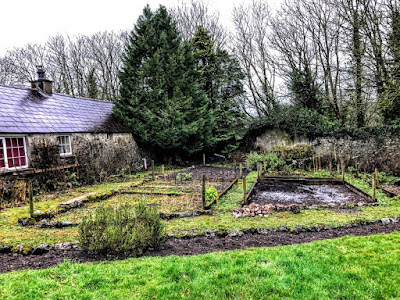 There is an interesting group of stone-built outbuildings to the rear, incorporating the medieval tower house in the north-east corner, with the U-plan courtyard or farmyard formed by three ranges of farm buildings.

However, as I walked around the walled garden and courtyard at Wallstown Castle on a wet, grey afternoon at the end of last week, beside the ruined mediaeval castle, I could not find the old petrol pumps once used to fuel the private plane kept and flown by the Crowley family in the first half of the last century. 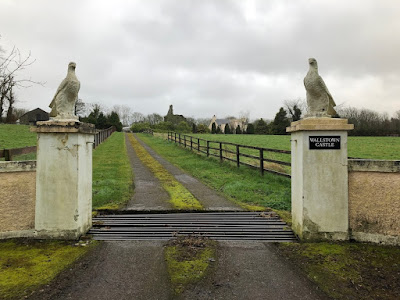 The entrance to Wallstown Castle, with the mediaeval and 18th century castles at the end of the drive (Photograph: Patrick Comerford, 2020)