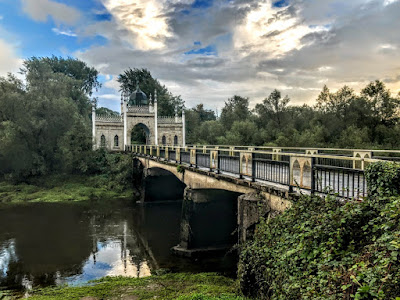 As children in Cappoquin, we saw Dromana Gate Lodge and Bridge, near Villierstown, as one of the most exotic and dramatic works of architecture in West Waterford. The bridge crosses the River Finisk just above the point where it flows into the River Blackwater, south of Cappoquin.

In the late 1950s and early 1960s, older members of the family tried to tease us that this was Ireland’s first – and, at the time, only – mosque, or that it was Ireland’s Taj Mahal. The gate lodge and the bridge had lost none of that exotic appeal and charm when we arrived there at dusk one evening on this summer ‘Road Trip’ through southern Ireland.

The gate lodge was built in what was described as a ‘Hindu Gothic’ or ‘Brighton Oriental’ style and it marks the old entrance to the Villiers-Stuart estate at Dromana, south of Cappoquin.

The original archway made from timber, canvas and papier mâché in 1826 to greet the return from their wedding of Henry Villiers-Stuart of Dromana and his wife Theresia Pauline Ott of Vienna.

The couple had spent their honeymoon at Brighton in 1826, and the gate is believed to have been inspired by the Royal Pavilion in Brighton, designed by John Nash and built in 1815-1822. They were so enchanted by the gate that a permanent replacement was designed by the Wexford architect Martin Day in 1849 and completed in 1851.

Martin Day was notable in designing several Church of Ireland churches for the Board of First Fruits and the Irish Ecclesiastical Commissioners in 1822-1849. He assisted Daniel Robertson at Ballinkeele, Johnstown Castle, Bloomfield and Castleboro House in Co Wexford, and he designed other country houses too.

Day’s design at Dromana is a bizarre combination of styles – from flamboyant Gothic with ogival arched windows, to Brighton pavilion oriental, complete with onion dome and minarets – making it a truly remarkable and unique work of art.

The striking aspect of the gate at Dromana centres around a simple composition of a central gateway flanked on either side by single-cell chambers or porters’ lodges. It also includes features of Georgian Gothic ecclesiastical architecture such as the curvilinear profile of the openings, decorative glazing bars, and a quatrefoil-detailed filigree overhead.

Its exotic character is highlighted by the slender minaret-topped piers framing the copper-clad onion dome. 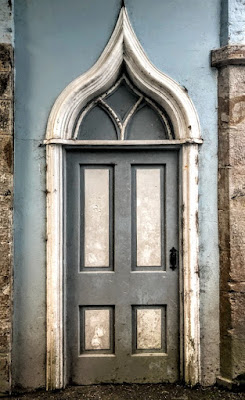 The door at one of the single-cell chambers or porters’ lodges at the gatehouse in Dromana (Photograph: Patrick Comerford, 2020)

Henry Villiers-Stuart died in 1874 and the gatehouse fell into a state of disrepair in the early 20th century. It was restored by the Irish Georgian Society in the 1960s.

Dromana Gate leads directly to Dromana House and Gardens, perched over the River Blackwater. For over 800 years this home has passed down in direct descent from the FitzGerald family to the Villiers-Stuart family.

Queen Elizabeth realised the dangers of political instability in this part of Ireland. Large tracts of land in West Waterford were granted to her political allies, including Walter Raleigh, Edmund Spenser, and Richard Boyle, Earl of Cork ancestor of the proprietors of Lismore Castle and the Dukes of Devonshire.

The Battle of Affane had set in motion a series of events that led to the Desmond Rebellions and the subsequent Plantation of Munster. But the FitzGeralds of the Decies held on to their estate for Dromana.

The bridge over the River Finisk, close to the battle site, was part of the Dromana estate until the 1970s, when it was taken over and rebuilt by Waterford County Council.

Darkness was beginning to close in as we stood on the bridge. But Barbara Grubb, a member of the Villiers-Stuart family, had promised to show us around Dromana House and the gardens the next day, and we would return to Dromana the following afternoon. 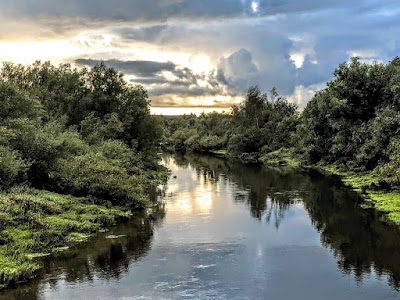 Dusk on the River Finisk at Dromana … a peaceful scene at the site of the Battle of Affane (Photograph: Patrick Comerford, 2020)