An ordination in Antrim and a beach walk in Termonfeckin 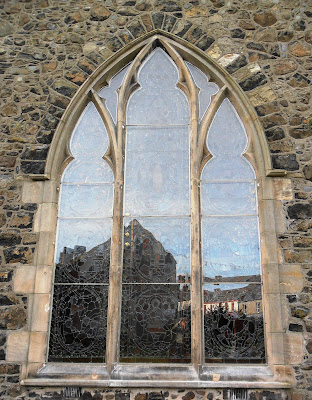 The streets of Antrim reflected in the East Window of All Saints’ Church (Photograph: Patrick Comerford, 2011)

It took 2½ hours to get from South Dublin to Antrim town on the shores of Lough Neagh this morning. I was in All Saints’ Church, Antrim, for the ordination of the Revd Adrian Halligan. It is always joyful to be present at a student’s ordination... and the joy of the occasion, and the warmth of the welcome from the parishioners in Antrim more than repaid the journey and the effort .

Adrian was ordained deacon this morning by Bishop Gordon McMullan, retired Bishop of Down and Dromore, to serve as an NSM curate in the parish of Antrim, where the Archdeacon of Connor, the Ven Stephen McBride, is vicar, and the Revd David Ferguson is curate.

All Saints’ Church is at the end of the High Street in Antrim, a charming town

Although the town and parish may date back to the 13th or 14th century, and there were Vicars of Antrim from at least 1380, the present parish church dates from 1596, according to the date inscribed on the cornerstone, and still retains many of its original Elizabethan features.

The parish was the birthplace of many notable church figures, including Archbishop William King (1650-1729) of Dublin, and during the 1798 Revolution, the Battle of Antrim was fought on the streets around the church, with the United Irishmen led by Henry Joy McCracken, and the Vicar of Antrim, the Revd George McCartney, and his two sons playing key roles in the defence of the town by the government military forces, and the rebels under Jemmy Hope made their last stand in the churchyard.

Lord Edward Chichester was appointed Vicar of Antrim on 8 June 1825 ... less than two months after he was ordained priest on 10 April, and a mere ten months since he was been ordained deacon on 1 August 1824. His uncle, Lord Spencer Stanley Chichester, was a profligate gambler and his debts forced him to sell many of his estates, including Comberford Hall and Fisherwick Hall near Lichfield in Staffordshire, in the early 19th century.

Many of the monuments in the church recall the Skeffington family, who held the title of Lord Massereene. The family originally came from Fisherwick, near Lichfield in Staffordshire, but inherited large estates in Co Antrim through marriage in the 1660s – a century earlier, Mary Skeffington of Fisherwick had married William Comberford, and many members of the Skeffington family of Fisherwick, including Mary’s parents, her brothers and her nephew, are buried in Saint Michael’s Church, the same church where the parents of Samuel Johnson are buried.

One of the most notable monuments is to Chichester Skeffington, 2nd Earl Massereene, who died in 1816. This mural monument on the north side is one of the finest examples of the work of R.A. Flaxman. It shows two weeping women, one representing his wife, the other his only daughter, Lady Harriet Skeffington. 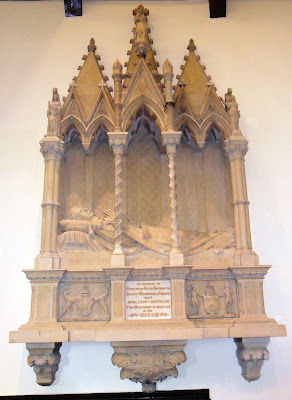 Near the pulpit, another grand family monument shows John Skeffington (1812-1863), 10thViscount Massereene in the robes of a Knight of the Order of Saint Patrick, reposing beneath a High Victorian Gothic triple canopy adorned with three female figures representing the three virtues of Faith, Hope and Charity. What is fails to tell us is that this peer died after falling from his terrace garden while uprooting a shrub that gave way suddenly.

The Revd Graham Nevin, who was in the seat in front of me, was sitting immediately below this monument, as he knelt and stood, watch his head carefully avoid the leafy ends of the monument that must have represented that uprooted shrub – his dexterity at every move thankfully another tragedy. 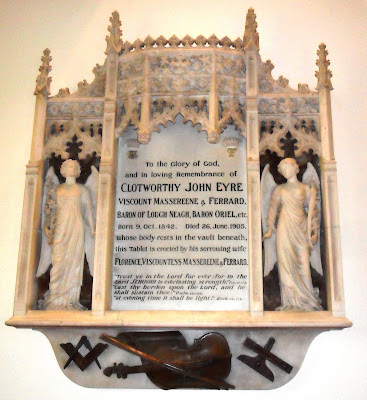 In the Massereene Chapel, the monument to his son, Clotworthy John Eyre Skeffington (1842-1905), 11th Viscount Massereene, a passionate musician, includes an alabaster violin with a broken string, signifying the silence of the instrument after the owner’s death.

Beside this monument in the Massereene Chapel is a 15th century window said to have been brought to Antrim by a member of the Skeffington family. One panel in the lower right hand depicts the martyrdom of Saint John the Baptist.

But perhaps the most impressive monument in the church is the recently restored Gothic East Window, which is of cathedral proportions. It depicts ten scenes from the life of Christ before his Crucifixion and Ascension, and was erected in 1870 in memory of a Lady Massereene.

Outside, in the churchyard, there are interesting memorials to Alexander Irvine, the social reformer, author and theologian; to George McCartney, the fighting vicar of 1798; and the geologist George Victor du Noyer. But also worth looking out for are the foundation stone, dated 1596, a number of holes in the church wall, a little above ground level. Parishioners like to say that these were used in the past by people with leprosy who were not allowed into the church – although it is more likely that they served as loop holes from which muskets could be fired.

After Adrian’s reception, the parishioners of All Saints provided a welcome reception in the Parish Centre, which stands on the site of the former Saint Patrick’s Church.

The roads south of Belfast to Newry and the Mountains of Mourne were still covered in a dusting of snow. But as we left Clogherhead, and approached Termonfeckin, four miles north of Drogheda, the sun was setting over the church spires, casting a golden glow that almost had a hint of Spring in it.

It was dusk as we strolled along the beach in Termonfeckin, and it was dark by the time we returned to the car. We headed back through Drogheda, Julianstown and Gormanston to Dublin. But it had been a beautiful and joyful Sunday.
Posted by Patrick Comerford at 21:35