Walking along the backs at Cambridge

After registering for the summer school in Sidney Sussex College on Sunday afternoon, and checking into my room, I went for a stroll along the Backs, one of the pleasant ways of spending a sunny summer’s afternoon in Cambridge.

The Backs lie east of Queen’s Road, an area where several colleges back on to the River Cam, with their grounds covering both banks of the river. The area is rich with trees, lawns and gardens belonging to six colleges: Queens’ College, King’s College, Clare College, Trinity Hall, Trinity College and Saint John’s College.

Along the upper reaches of the river, above Silver Street, the river is known in Cambridge as the Granta, and as the Cam below Silver Street Bridge.

Six college own their own part of the river banks along the Backs, so it was not possible to walk a continuous, uninterrupted path. But I was able to walk most of it, on occasion walking through college grounds and crossing the river using college bridges at Queens’, Clare and Saint John’s. and two free public bridges – Silver Street Bridge and Garret Hostel Bridge, which is open only to pedestrians and cyclists.

I suppose the best way to see the Backs is from a punt, a flat bottomed boat that is poled along. Punts are available for hire at Silver Street Bridge and at the Quayside by Magdalene Bridge. 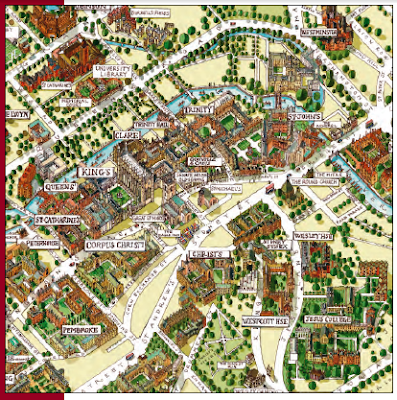 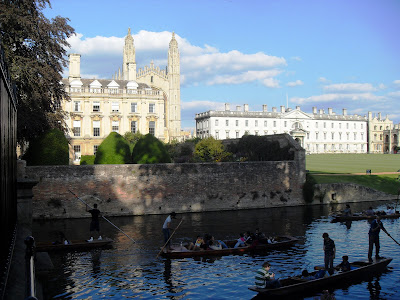 Punting on the River Cam or the Backs, behind Clare College, with the pinnacles of King’s College Chapel in the background (Photograph: Patrick Comerford, 2011)

Until the foundation of King’s College in 1441, there may have been a continuous lane along the east bank of the river, called Milne Street, leading to the mills at Newnham, and joined to the High Street (now King’s Parade and Trinity Street) by a number of smaller lanes. But this only survives in parts as Queens’ Lane and Trinity Lane.

On the west bank of the river, more lanes led down to the hythes or landing places for goods brought up by river from King’s Lynn and the sea.

River frontage was as valuable as street frontage in those days, and the colleges were anxious to preserver and expand their access to the river. When King’s College was founded, royal patronage provided it with a more than ample site between the High Street and the river, sweeping away a large stretch of Milne Street and all that lay in the way, and more fields on the west bank.

Royal patronage also provided Trinity College with a large site, enhanced by the amalgamation and eclipse of two smaller colleges.

In the past, college grounds by the river were more utilitarian than ornamental. The colleges used much of the land for grazing livestock or growing fruit, and the river served as an important commercial thoroughfare to the mill at Silver Street. In the 16th century, the area consisted of pasture, gardens and orchards owned by colleges, with wooden bridges across the River Cam. 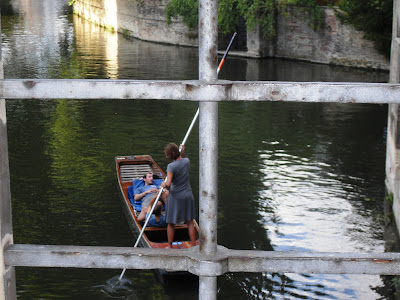 Punters beneath the Bridge of Sighs at Saint John’s College (Photograph: Patrick Comerford, 2011)

Over time, the colleges planted avenues of trees and built sturdier bridges. Then, in 1772, Saint John’s College commissioned Lancelot ‘Capability’ Brown (1716–1783) to lay out a “wilderness” on the college side of Queen’s Road – a creation that exists to this day.

In 1779, Brown proposed creating a country-house-style parkland, with its focus on the Gibbs Building at King’s College. The plan involved removing avenues, transforming the river into a lake, and planting groves of trees to screen other colleges. It was never implemented, perhaps because it would have removed historic college boundaries and three important bridges. The colleges even resisted building a shared towpath along the banks to help the passage of horse-drawn barges.

With the loss of many elm trees due to Dutch elm disease, a Backs Committee was formed in 1979 to take a joint approach to the problem facing The Backs. The committee’s work saw trees being cut down, and new ones planted in their place. But the committee’s work ground to a halt in 1994. A year later, English Heritage listed the Backs as a Grade 1 Historic Park.

In the 2000s, six colleges on the Backs commissioned Robert Myers, a landscape architect from Girton College, to prepare a new landscape management plan for the area. His report, The Backs Cambridge Landscape Strategy, published in 2007, set out proposals for The Backs over the next 50 years. He proposed improving the “legibility, coherence and visual quality of the landscape as a whole” by retaining and enhancing the existing structure of the landscape and sight lines, while screening off the traffic on Queen’s Road. Over-mature and inappropriately-sited trees would be removed and new ones planted, there would be a phased replacement of avenues, an extension of the “wilderness” planting behind Saint John’s and along the edge of Queen’s Road, and a “wildlife corridor” would be created. 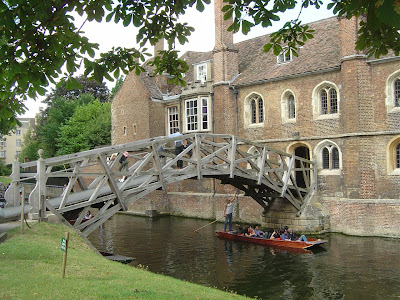 The beauty of the Backs has been admired and been a source of envy. Hartley Carrick of Hertford College, Oxford, wrote in 1907:

Oxonians, doff your naughty pride,
And go and put your heads in sacks;
Though you may boast the Oxford Side
You’ve nothing like the Cambridge Backs!

After Vespers in the Chapel of Sidney Sussex and a reception in the garden at Wesley House, some of us went for dinner last night in the courtyard at d’Arry’s in King Street. Sidney Sussex has no direct access to the Backs, but there are delightful places at the back of the college to spend an evening with friends.

What a lovely post. I loved Carrick's rhyme. Any idea what the reference to the 'Oxford Side' is? Having just left Sidney I'll miss the walk along the Backs.

If you’d like to try some new places to eat and drink I’d suggest Bill’s – a restaurant serving a delicious range which has just opened on Green St – and Stickybeaks for coffee with charming service and daily-changed menus at the intersection of Sussex St and Hobson St.

The Oxford 'side' is a reference to the Thames, which in Oxford is known as the Isis ... side meaning riverside or beside the colleges, I imagine.