A cathedral exhibition of a find that redefines Anglo-Saxon culture 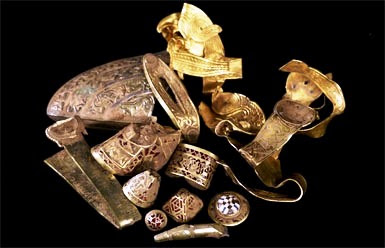 As summer came to a close, I was back in Lichfield to visit Lichfield Cathedral and the exhibition in the Chapter House of the “the Staffordshire Hoard on Tour.” Even before it opened, the exhibition was a sell-out. It was a unique opportunity to discover the secrets of the largest collection of Anglo-Saxon gold ever found, giving visitors an opportunity to learn too about the arrival of Christianity in the English Midlands and about Lichfield’s patron, Saint Chad. 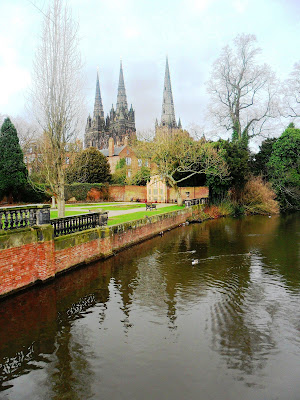 Lichfield Cathedral traces its story back to the same time scholars believe the Staffordshire hoard was hidden (Photograph: Patrick Comerford, 2011)

The Staffordshire Hoard is the largest-ever find of Anglo-Saxon gold and silver in England, and is so beautiful it is said it brought tears to the eyes of the experts. None of the experts who examined the hoard has seen anything like it before, and all are impressed by the quantity and dazzling quality of the pieces. Deb Klemperer of the Potteries Museum said: “My first view of the hoard brought tears to my eyes – the Dark Ages in Staffordshire have never looked so bright nor so beautiful.”

The hoard was discovered in shallow ground in a field near the village of Hammerwich, on the outskirts of Lichfield, two years ago on 5 July 2009. It has turned out to be the largest hoard of Anglo-Saxon gold and silver metalwork yet found. It is without precedent, eclipsing the 1.5 kg hoard found in the Sutton Hoo ship burial in 1939.

Dr Leslie Webster of the British Museum describes the hoard as “absolutely the metalwork equivalent of finding a new Lindisfarne Gospels or Book of Kells.” She says: “This is going to alter our perceptions of Anglo-Saxon England as radically, if not more so, as the Sutton Hoo discoveries.” 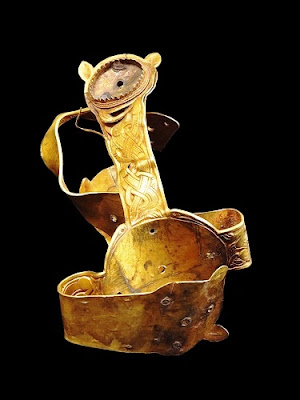 Experts would regard any one item found in the Staffordshire Hoard as a spectacular discovery, but there are about 3,000 items, nearly all of them martial in character. They have been dated to the 7th or 8th centuries, placing their origins in the time of the Kingdom of Mercia. They include spectacular gem-studded pieces decorated with tiny interlaced beasts that originally decorated princely Anglo-Saxon swords. There are dazzling gold sword hilt collars, pommel caps, weapons and helmet decorations, coins and crosses, and many gold hilt plates, some with inlays of cloisonné garnet in zoomorphic designs. It all adds up to 5 kg of gold and 2.5 kg of silver.

Dr Kevin Leahy of the British Portable Antiquities Scheme says the quantity of gold is extremely impressive and that, “more importantly, the craftsmanship is consummate, this was the very best that the Anglo-Saxon metalworkers could do, and they were very good.” But the contents of the hoard are unbalanced. “There is absolutely nothing feminine. There are no dress fittings, brooches or pendants. These are the gold objects most commonly found from the Anglo-Saxon era. The vast majority of items in the hoard are martial – war gear, especially sword fittings.”

He points out the significance of dozens of pommel caps – decorative attachments to sword handles – and that Beowulf contains a reference to warriors stripping the pommels from their enemies’ swords. The sword pommels alone amount to the largest ever discovery of pommels in a single context, with many different types – some previously unknown – supporting the idea that the pommels were made over a wide range of time. 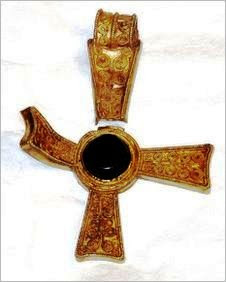 The largest cross, which is missing some decorative settings, may have been an altar, processional or pectoral cross

The only items not obviously martial are two or three crosses that were folded casually. The largest cross is missing some decorative settings, but otherwise remains intact. It may have been an altar, pectoral or processional cross, but the cross was folded, either prior to burial “to make it fit into a small space,” or as a sign that the deposit was buried by pagans. 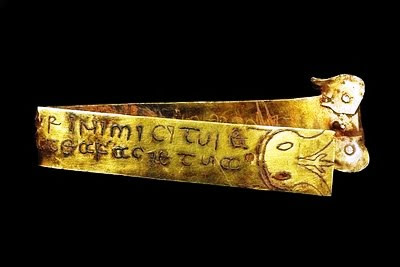 A small strip of gold, folded in half and inscribed on both sides with an Old Testament quotation

One of the most intriguing items is a small strip of gold, folded in half and inscribed on both sides with an Old Testament quotation in misspelled Latin: Surge Dne disepentur inimici tui et fugent qui oderunt te a facie tua (Surge Domine et dissipentur inimici tui et fugiant qui oderunt te a facie tua). “Arise, O Lord, and let thy enemies be scattered; and let them that hate thee flee before thee” (Numbers 10: 35); or “Rise up O Lord; may your enemies be scattered and those who hate you be driven from your face” (Numbers 10: 35, NRSV).

The gold strip may have been fastened to a shield or a sword belt. But Dr Nicholas Brooks of Birmingham University believes it is the arm of a cross and that it dates from the same time as the gold and garnet pommels and other sword jewels in the hoard. 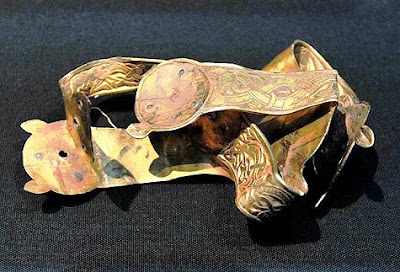 The experts are still debating when the pieces were made, the date they were placed in the ground, and the significance of most objects. Theories about the reason for the deposit are many, and experts differ about whether those who left the hoard behind were Christian or pagan. 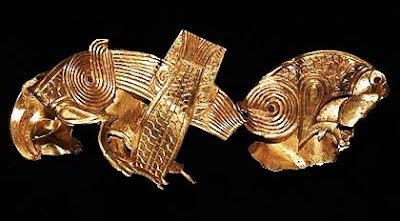 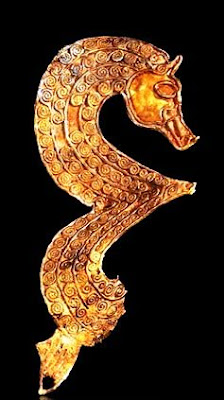 An eagle and fish, and a seahorse, among the gold items in the find

Professor Brooks suggests the hoard may have belonged to the Mercian court armourer. Dr Michael Lewis of the British Museum thinks it may have been buried as a religious deposit or as “a treasure chest that got lost, or they couldn’t come back for it.” 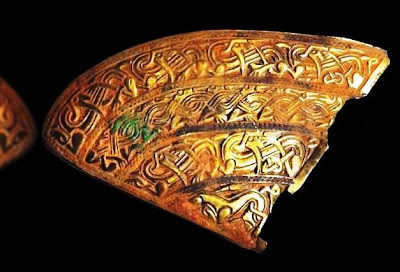 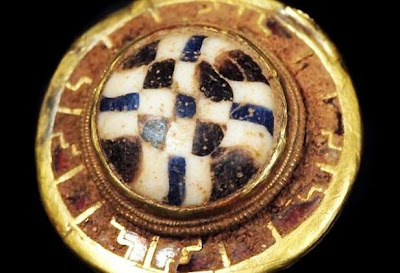 A helmet cheek piece in the exhibition, and a blue and white stud displaying intricate workmanship

Dr Leahy says swords were singled out, with most of the gold and silver items removed intentionally from the objects they were attached to. He suggests the gold fittings may have been removed to depersonalise the objects, removing the identity of their owners, and that the blades may have been reused.

He says the hoard may be a collection of trophies. But it is impossible to say whether they are the spoils of a single battle or a long series of battles. He suggests the deposit “may have been tribute to heathen gods or concealed in the face of a perceived, but all too real, threat, which led to it not being recovered.”

If the hoard dates from AD 650 to AD 750, it may be booty from a spectacularly successful raiding party from Mercia, sometime around AD 700. Dr Leahy is not surprised that the hoard was found in south Staffordshire, which was the heartland of the 7th century Kings of Mercia, including Penda, Wulfhere and Æthelred. “This material could have been collected by any of these during their wars with Northumbria and East Anglia ... Here we are seeing history confirmed before our eyes.”

No longer the ‘Dark Ages’

These insights mean we can no longer think of that era as the “Dark Ages.” Anglo-Saxon England gave modern England its laws, its parish boundaries, and the language of Beowulf that has evolved into modern English. But it also gave England metalwork and manuscript illuminations of dazzling intricacy and beauty. 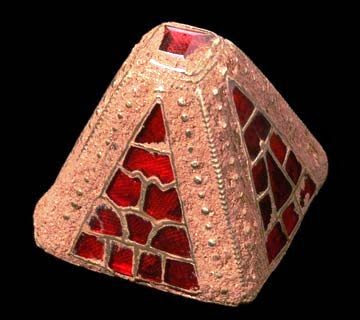 An analysis of the garnets in the find indicates that these Anglo-Saxons may have traded with places as far away as Bohemia or even Ceylon (Sri Lanka). The detail and beauty of the metalwork, like the colourful patterns on pages of the Lichfield Gospels, show the intimate links between cultural life in Ireland and the Anglo-Saxons at that time. 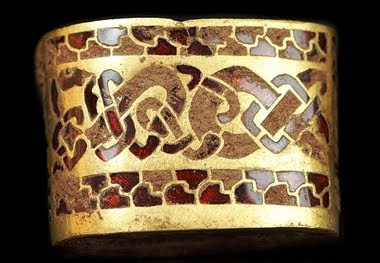 By the time the Staffordshire Hoard was deposited, the Anglo-Saxons were nominally Christian. Mercia was one of England’s largest kingdoms, stretching from the Humber to London, with its kings and chieftains waging short, ferocious wars against their neighbours and against each other. 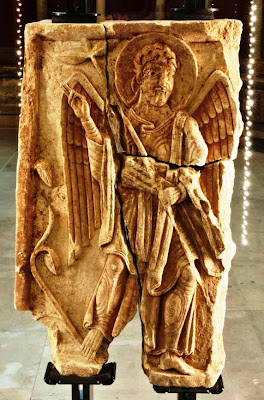 Canon Pete Wilcox, Canon Chancellor of Lichfield Cathedral, says the Chapter House was an appropriate venue for this exhibition. The cathedral’s origins date from the same time scholars believe the hoard was buried, and Lichfield Cathedral has its own exquisite Anglo-Saxon treasures – the Saint Chad Gospels, which predate the Book of Kells, and the Lichfield Angel, both of which were on display as part of the exhibition. 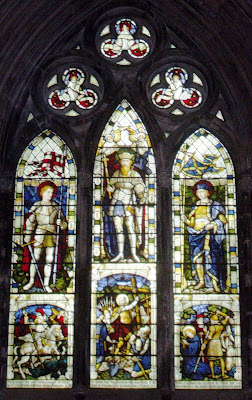 A window in Lichfield Cathedral tells the story of the arrival of Christianity in Mercia, one of largest kingdoms in Anglo-Saxon England (Photograph: Patrick Comerford, 2011)

As Ann Parkhill, a cathedral volunteer from Ireland, guided our small group around the cathedral and the exhibition, she pointed out that Tamworth was the administrative capital of Mercia, while Lichfield was the religious heart of the kingdom that developed around the shrine of Saint Chad and became a diocese.

Appropriately, the Saint Chad Gospels were opened at the reading for the Sunday before the exhibition opened, which included the words: “The kingdom of heaven is like treasure hidden in a field, which someone found and hid; then in his joy he goes and sells all that he has and buys that field” (Matthew 13: 44). 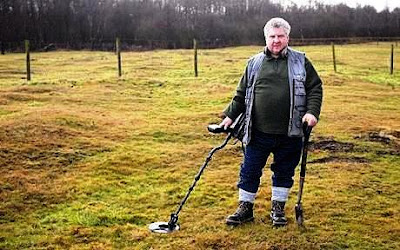 The field on Fred Johnson’s Farm where the hoard was discovered is close to the Roman staging post of Letocetum and Watling Street, a major Roman road that continued in use in the Anglo-Saxon period, acting as the demarcation line between the Anglo-Saxon and Danish-ruled parts of England in the 9th century.

The first pieces were found by Terry Herbert, an amateur metal detector. Over a five-day period, he found enough gold objects to fill 244 bags. The excavation that followed recovered more than 3,000 artefacts. Archaeologists pored over every inch of ground without finding any trace of a grave, a building or a hiding place. Duncan Slarke of Birmingham Museum and Art Gallery recalls: “Nothing could have prepared me for that. I saw boxes full of gold, items exhibiting the very finest Anglo-Saxon workmanship. It was breath-taking.”

The announcement of the discovery caused a media sensation. A website set up to showcase the finds had over 10 million hits in its first week. The first exhibition at the Birmingham Museum and Art Gallery attracted 40,000 visitors, with queues forming for several hours. Parts of the hoard then went on display in the British Museum in London and in the Potteries Museum and Art Gallery in Stoke-on-Trent, before many items were taken to the British Museum for cataloguing, cleaning and conservation.

The Staffordshire Hoard then goes on permanent display in Birmingham and Stoke-on-Trent. The history books are being rewritten; never again can we think of the Anglo-Saxons in the same way. 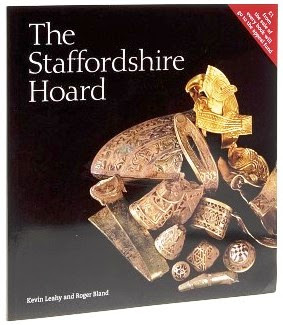 The history books are being rewritten

Canon Patrick Comerford is Lecturer in Anglicanism and Liturgy at the Church of Ireland Theological Institute, and a canon of Christ Church Cathedral, Dublin. This essay was first published in October 2011 in the Church Review (Dublin and Glendalough) and the Diocesan Magazine (Cashel and Ossory).