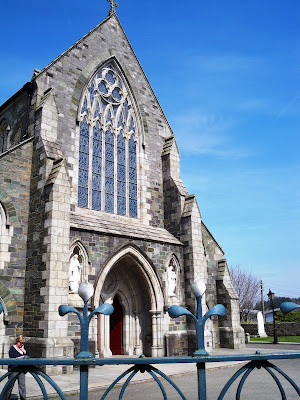 Over the next week or two, in these last days of Advent as we prepare for Christmas, I plan to post some of my favourite Christmas poems – although not necessarily in any order of preference.

The carol, as you can imagine, is thought to have originated in Co Wexford. There are many traditions about this poem and song, and for many years, it was said that only men should sing it.

Since achieving renewed popularity, many popular female artists have recorded The Wexford Carol since the 1990s.

The Wexford Carol achieved a new popularity because of the work of Dr William Henry Grattan Flood (1857-1928), who was the organist and musical director at Saint Aidan’s Cathedral, Enniscorthy, Co Wexford, and the author of The History of the Diocese of Ferns (1916). According to the Revd Joseph Ranson, in a paper in The Past (1949), this carol was discovered by Dr Grattan Flood in Co Wexford. He transcribed the carol from a local singer, and it was published in 1928, the year of his death, as No 14 in the Oxford Book of Carols, edited by Percy Dearmer, Martin Shaw and Ralph Vaughan Williams.

The carol was quickly included collections of carols and Christmas poems around the world, and is sometimes known as the Enniscorthy Carol, and was recorded under this title by the Choir of Christ Church Cathedral, Dublin, on a Christmas recording in 1997. It is also known by its first verse, “Good people all this Christmas time.”

The New Oxford Book Of Carols, in a detailed footnote following No 162, “Good People All, This Christmastime,” says: “… Dr WH Grattan-Flood (1859-1928) lived in Enniscorthy from 1895 until his death, and [...] took down the words and tune from a local singer; after revising the text, he sent the carol to the editors of The Oxford Book of Carols, who printed it as the ‘Wexford Carol’.” However, the note continues with more detail showing the text to be English in origin, and verses 1, 2, 4, are 5 are from Shawcross’s Old Castleton Christmas Carols.

Certainly, the Irish-language version seems to be a translation from English, as it is unlikely that any carol was written in Irish in English-speaking Co Wexford. 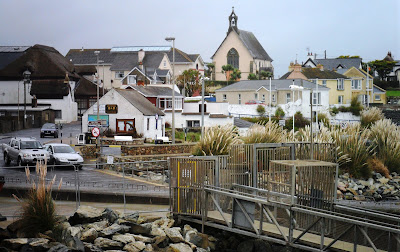 Winter at Kilmore Quay, Co Wexford ... the Wexford Carol is often associated with the tradition of the Kilmore Carols (Photograph: Patrick Comerford)

The Wexford Carol is often associated with the Kilmore Carols from Kilmore, Co Wexford, and it is often attributed too to Bishop Luke Wadding of Ferns and his collection of carols, first published in Ghent in 1684.

Luke Wadding’s little book had a far-reaching influence on the spiritual lives of the people of his diocese in Co Wexford. The book had the lengthy title: A small garland of pious and godly songs composed by a devout man, for the solace of his friends and neighbours in their afflictions. The Sweet and the Sower, the nettle and the flower, the Thorne and the Rose, this Garland Compose.

Bishop Luke Wadding, who should not be confused with his kinsman, the 17th-century Franciscan theologian from Waterford of the same name. Luke Wadding, whose family came from Ballycogley Castle, Co Wexford (which is currently on the market), was the Roman Catholic Bishop of Ferns from 1683 to 1692, and he lived in Wexford town while he was bishop.

Wadding’s book contains some religious “posies” or poems written for the disinherited gentry of Co Wexford, and some verses relating to the “Popish Plot.” It also includes what was to become the foundation of a tradition of carol singing in Co Wexford, with 11 Christmas songs, two of which are sung to this day in Kilmore.

A similar carol is found in the Revd William Devereux’s A New Garland Containing Songs for Christmas (1728). William Devereux (1696-1771), from Tacumshane, was Parish Priest of Drinagh, near Wexford, from 1730 to 1771, and wrote several carols. He called his collection A New Garland to distinguish it from Bishop Luke Wadding’s earlier Pious Garland. The carols were first sung in a little chapel at Killiane. 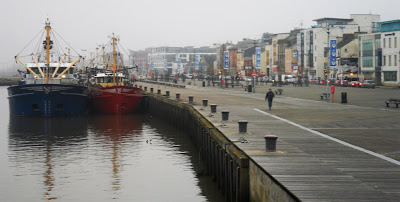 Winter on the quays in Wexford (Photograph: Patrick Comerford)

Good people all, this Christmas-time,
Consider well and bear in mind
What our good God for us has done,
In sending His beloved Son.
With Mary holy we should pray
To God with love this Christmas Day:
In Bethlehem upon that morn
There was a blessed Messiah born.

The night before that happy tide
The noble Virgin and her guide
Were long time seeking up and down
To find a lodging in the town.
But mark how all things came to pass;
From every door repelled alas!
As long foretold, their refuge all
Was but an humble ox’s stall.

There were three wise men from afar
Directed by a glorious star,
And on they wandered night and day
Until they came where Jesus lay,
And when they came unto that place
Where our beloved Messiah was,
They humbly cast them at his feet,
With gifts of gold and incense sweet.

Near Bethlehem did shepherds keep
Their flocks of lambs and feeding sheep;
To whom God’s angels did appear,
Which put the shepherds in great fear.
“Prepare and go,” the angels said,
“To Bethlehem, be not afraid;
For there you’ll find, this happy morn,
A princely Babe, sweet Jesus born.”

With thankful heart and joyful mind,
The shepherds went the Babe to find,
And as God’s angel had foretold,
They did our Saviour Christ behold.
Within a manger He was laid,
And by his side the Virgin Maid,
As long foretold, there was a blessed Messiah born.

The Wexford Carol is sometimes confused with The Sussex Carol, which is sometimes referred to by its first line too: “On Christmas night all Christians sing.” It is said the words of this carol were first published by Bishop Luke Wadding in A Small Garland of Pious and Godly Songs (1684). However, it is not clear whether he wrote the song or that he was recording an earlier composition.

Edward Darling and Donald Davison, in their Companion to Church Hymnal, the words are from a traditional English source, that they were adapted by Luke Wadding, and that they were reintroduced to English use through later editions of Wadding’s carols, published in London in the early 18th century, subsequently undergoing considerable modification.

Both the text and the tune to which it is now sung were discovered and written down quite independently by Cecil Sharp in Buckland, Gloucestershire, and Ralph Vaughan Williams, who heard it being sung by a Harriet Verrall of Monk’s Gate, near Horsham, Sussex – hence its name, The Sussex Carol.

The tune to which it is generally sung today is the one Vaughan Williams published in 1919. Several years earlier, he included the carol in his Fantasia on Christmas Carols, first performed at the Three Carols Festival in Hereford Cathedral in 1912.

The Sussex Carol often features in the Festival of Nine Lessons and Carols in the Chapel of the King’s College, Cambridge, and I hope to return to that service time and again in the coming weeks.

A version of the Sussex Carol also appears in the Irish Church Hymnal (5th edition, 2004) as Hymn No 176.

The words of The Sussex Carol, in the version collected by Ralph Vaughan Williams, are: