The Works of Love: incarnation, ecology and poetry 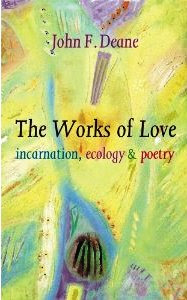 For many years, Achill Island was one of my favourite places to retreat to in search of quiet and solitude. At the time, there were no mobile phones, not even a dial telephone, making Achill was the perfect place to find time and space to think, to be creative and to write.

But Achill was also inspiring as the island of Edward Nangle and mission, and inspiring as the island beloved by the German Nobel Prize winning writer Heinrich Böll. There he wrote his Irish Journal and his cottage remains a retreat for writers and artists. The island attracted artists such as Paul Henry and Robert Henri, writers such as Graham Greene and Honor Tracy.

Unlike these artists and writers, who were all from outside Achill, John Deane is an Achill-born writer and poet. He comes from a strongly creative and intellectual family: his brother Raymond Deane is a composer and musician; another brother was the Jesuit theologian, the late Declan Deane,

John Deane is the founder of Poetry Ireland and The Poetry Ireland Review, a member of Aosdána, has published many collections, and has received numerous awards, nationally and internationally.

He once considered the priesthood, and spent some time as a seminarian with the Spiritians (then known as the Holy Ghost Fathers) in Kilshane and in Kimmage Manor. And so it is natural that this new book, The Works of Love, introduced by Professor Enda McDonagh, is a study of poetry in the context of religious faith. In 40 short essays, he looks at major poets in the religious tradition, from the Psalms, Saint Patrick’s Breastplate and the Deer’s Cry, through the early Anglo-Saxon poets, the poets of the Reformation era, including the Jesuit Robert Southwell and the Anglican George Herbert, the Caroline and Civil War poets Andrew Marvell, Henry Vaughan and Thomas Traherne, to more recent poets including Gerard Manley Hopkins.

But we are introduced also to Augustine of Hippo, Hildegard of Bingen, Francis of Assisi, Saint John of the Cross, the painter Edvard Munch, Pierre Teilhard de Chardin and Rowan Williams as poets, to Tolstoy, Gogol and Pushkin, and to the English theologians Margaret Barker, a Methodist, and Elizabeth Jennings, a Roman Catholic.

While George Herbert and others are familiar to many Anglican readers, they are largely unknown to many who will come to this book – as Deane recalls from his school days with the Jesuits in Limerick: “There were no poems by George Herbert on any course in Mungret College … Indeed, during my five years of struggle in that institution, I gathered no care for, or true awareness of poetry.”

He has overcome all this in a masterly yet tender way, and now he introduces us through these poets and their poetry to his own redemptive account of his life. Vignettes scattered through the essays or chapters draw on childhood memories from Saint Patrick’s Day and Corpus Christi processions on Achill Island or climbing Croagh Patrick to a searing recollection of being cruelly beaten at school on the bare buttocks with a leather strap by one of his Jesuit teachers.

It is particularly moving to read his accounts of burying his father in Bunclody, Co Wexford, and of how his wife Barbara died in hospital two days before Christmas:

But it is I who have loved you,
have known the deepest secrets of your grace;
I take the golden ring from your finger,
I kiss the bride –

and they close the heavy doors against me
of that silent, vast, cathedral.

“By taking back the ring from her finger I felt that I was not letting God have the satisfaction of taking her from me, that I was still the one to care for her, that she was mine, as the sacrament of matrimony had stated. The truth is, I was lost, lost to faith, lost to myself. Lost, for the moment, to God.”

He revisits his mother’s grave in Bunclody, “a soft-toned town, to retire to”, and is reminded of

… the rising recurrent sorrow of the merely
human before loss, its unacceptability, its disdain.

In a collection of essays on poets, love and sacrament, it is surprising that there are only passing references to John Donne and TS Eliot. Yet, this is a book not just about poets and poetry, but about love and sacrament. And poetry and theology find truth when they return constantly to our experiences of and the revelations to us of love and in sacrament. For, as Enda McDonagh says in his introduction, “poets and poetry play a serious … [and] a revealing and redemptive role in the divine economy of creation-redemption.”

Patrick Comerford is Lecturer in Anglicanism and Liturgy, the Church of Ireland Theological Institute, and a canon of Christ Church Cathedral, Dublin.

Posted by Patrick Comerford at 18:17