The doorways of Rethymnon open into the story of a town 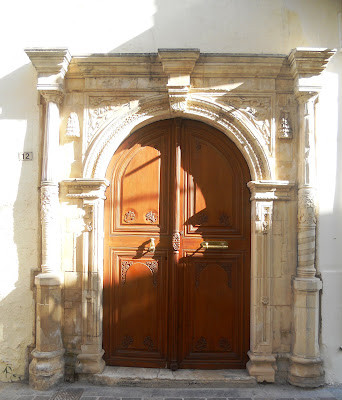 The streets of Rethymnon have such a rich architectural heritage that familiarity almost makes it possible to walk under Venetian archways and Ottoman kiosks or sahnisia and art noveau balconies or to pass by the doorways of once impressive mansions without casting a second glance.

The doorways and doorframes of Rethymnon are among the most characteristic features of the architecture of the old town, with their arched or straight lintels, integrated capitals, bases and cornices of porous stone, all part of the rich Renaissance heritage of this Greek island city. In no other city in Greece is it possible to see such a rich treasury of forms and decorative carving.

Much of the old town was rebuilt after the great fire of 1571, and so most of the older doorways have disappeared. Those that have survived are mainly from the last quarter of the 16th century or later. It is possible to see isolated examples of Gothic in a number of doorways, as well as the first four of the five orders of Italian Renaissance architecture – Corinthian, Ionic, Doric, Compound and Tuscan. 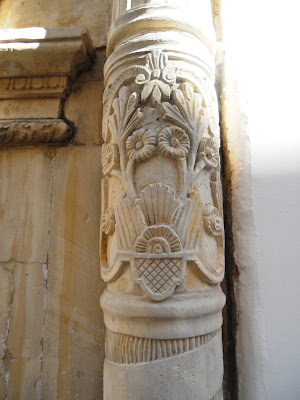 A few paces down from the Pepi Studios, where I was staying until the end of last week, No 12 Tsouderon Street has an impressive Venetian doorway, flanked by a pair of Doric doorposts. 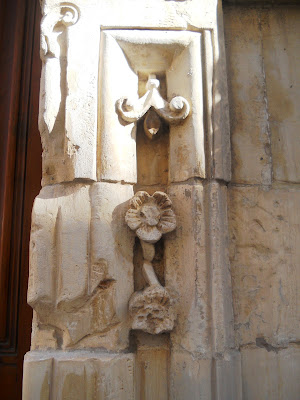 The space between is filled with horizontal layers of relief showing leaves, fruit and honeycombs or honey bees. 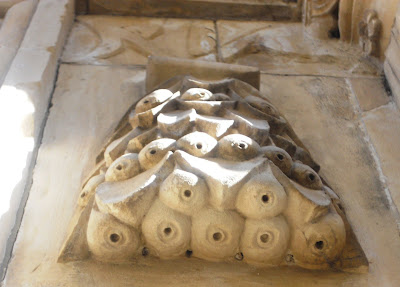 Bees or honeycombs on the doorway at No 12 Tsouderon Street (Photograph: Patrick Comerford, 2012)

The rounded triangles are filled with slender stalks and flowers in relief, and the lintel is decorated in a similar way. 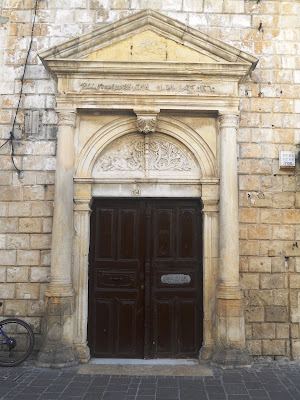 The elaborate door at No 154 Arkadiou Street, once the largest private residence in Rethymnon (Photograph: Patrick Comerford, 2012)

Around the corner from Tsouderon Street, Arkadiou Street has a rich collection of Venetian mansions and doorways. The three-story palazzo at No 154 Arkadiou Street is a Venetian building of outstanding beauty, and once the largest private residence in the old town.

The elaborate doorframe has columns extending from octagonal bases that support the architrave and the triangular pediment.

The bilingual inscription on the doorway, in both Greek and Turkish, has the date 25 November 1844 but this is clearly much later than the rest of the building, dating perhaps from renovations almost 180 years ago. 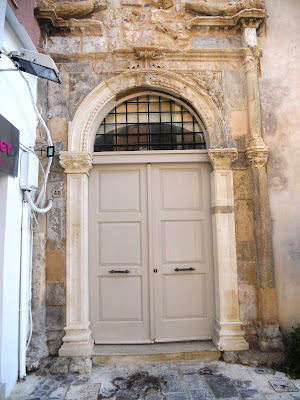 The doorway is all that remains of No 48 Arkadiou Street, yet it is one of the most richly decorated doorways in the old town (Photograph: Patrick Comerford, 2012)

Further east along the street, Pattakou Hani at No 48 Arkadiou Street, and Botonis Hani at No 50 Arkadiou Street, date from the last years of the Venetian era. They were used as saddlers’ shops until they were bought by the Ministry of Culture, but they still await restoration.

All that remains at No 48 is doorway. It is one of the most richly decorated doorways in the old town, but is almost hidden in the corner formed by a protruding building built next door. The capitals on the jambs are Corinthian, while those on the columns are of an individualistic nature, with strong Gothic elements.

The tall doorposts end in a semicircular lintel, and the rounded triangles are filled with winged cherubim in relief. The keystone takes the rich shape of an acanthus.

Until about a century ago or perhaps even later, there was a Greek-language inscription on the frieze, and a square fanlight between the porous stone lions which are now in a ruinous condition. 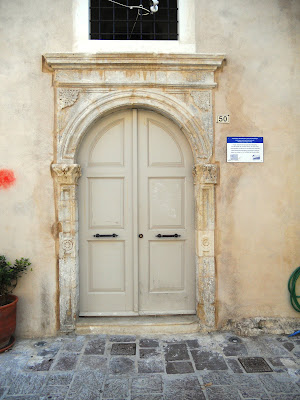 No 50 Arkadiou Street may have been the most impressive small Renaissance mansion in (Photograph: Patrick Comerford, 2012)

Next door, the Botonis Hani at No 50 Arkadiou Street may once have been one of the most impressive of the small Renaissance mansions – not only in Rethymnon, but in all of Greece. This house was built in the late 16th or early 17th century. 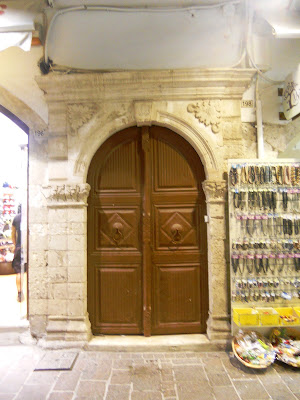 The Turkish doorway at No 198 Arkadiou Street (Photograph: Patrick Comerford, 2012)

Back west along the street, No 198 Arkadiou Street has a Turkish doorway, with plants carved on the capitals and blossom in low relief, clearly symbolic of the alem – the symbol of the Ottoman Empire – in the rounded triangles. 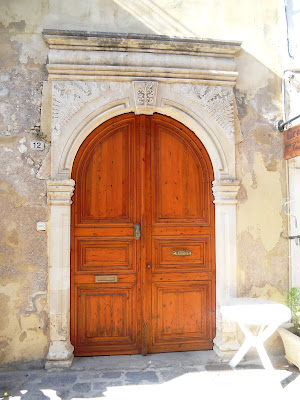 There is another Turkish doorway too at No 12 Aghia Barbara Street, with blossoms in the rounded triangles curving into a crescent at the bottom. 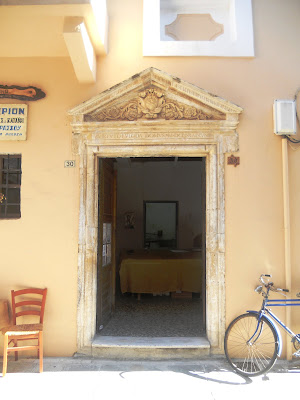 The Venetian doorframe at No 30 Vernardou Street (Photograph: Patrick Comerford, 2012)

The Venetian doorframe at No 30 Vernardou Street is one of the richest in Rethymnon, with a Latin inscription: Virtutue fulcida domus MCCIX Kal Iunii, ‘Virtue illuminates the house, Calends of June 1609.’

The doorway is unique in the town, ending with a pediment with rich carved decorations. The coat-of-arms of the Clodio family can still be seen in the in the centre of the tympanum. The remaining space is filled with leaves and flowers in relief. 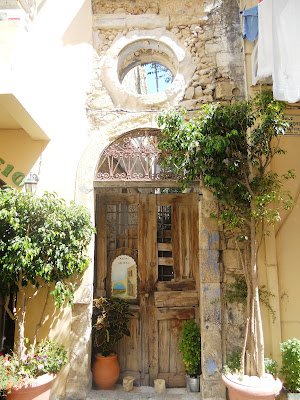 The entrance to the Turkish bath or hamam at No 25 Radamanthyos Street (Photograph: Patrick Comerford, 2012)

The decaying doorway at No 25 Radamanthyos Street is closed and locked. But hidden behind it is town’s only surviving Trkish bath or hamam. 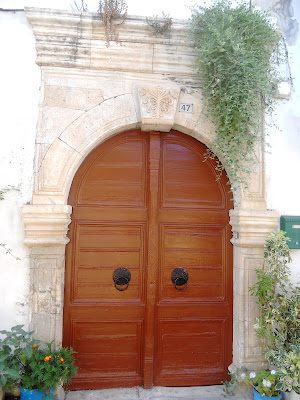 The doorway at No 47 Rhadamanthyos Street is one of the oldest in the town (Photograph: Patrick Comerford, 2012)

No 47 Rhadamanthyos Street is a fine example of plain doorposts and an arched doorway – the simplest style of doorway in Rethymnon and perhaps one of the oldest surviving doorways in the old town. 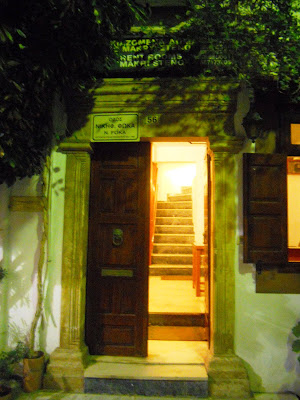 At No 56 Niki Foka Street, there is a simple doorway with a straight lintel . 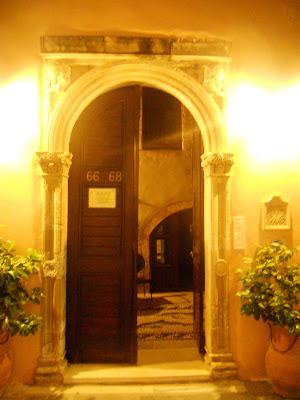 The restored house at Nos 66 and 68 Niki Foka Street has a doorway with Corinthian pillars (Photograph: Patrick Comerford, 2012)

The restored Venetian private house at Nos 66 and 68 Niki Foka Street has a doorway with Corinthian pillars rising to well-made capitals. The two rounded triangles are filled with the heads of warriors in relief.

Part of the frieze of the classical-style composition has survived with the last three letters of a lost Latin inscription: “...lus.” 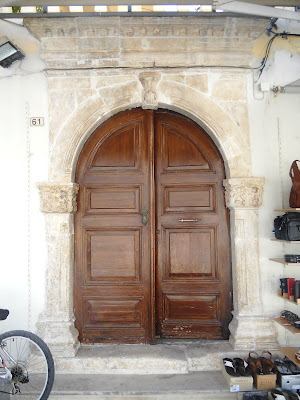 The Corinthian capitals of the doorway at No 61 Tombazi Street (Photograph: Patrick Comerford, 2012)

The capitals of the doorway at No 61 Tombazi Street are Corinthian and there are heads of warriors in relief in the triangles.

This theme, which is heraldic rather than military, helps to date the building because it first featured in Italian architecture in the late 16th century 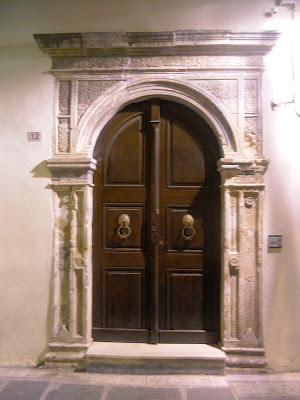 No 12 Koronaiou Street has one of the more interesting Turkish doorways in Rethymnon (Photograph: Patrick Comerford, 2012)

The doorway at No 12 Koronaiou Street is one of the more interesting Turkish doorways in Rethymnon. It consists of pairs of jambs and columns, and is richly-decorated with plant designs. There are flower pots in the rounded triangles and above the capitals, and there is a vine with grapes in the frieze.

This kind of decoration was not common in Renaissance architecture. Instead, it shows the Turkish love of nature. 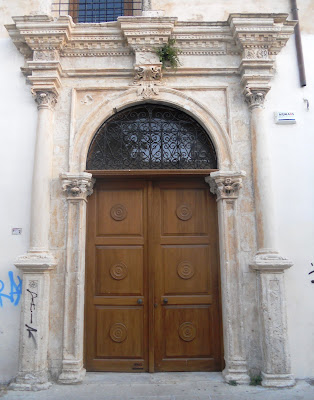 The Corinthian doorway of the Church of Saint Francis ... Rethymnon’s only example in of compound capitals (Photograph: Patrick Comerford, 2012)

The excessive decorations of the Corinthian doorway of the Church of Saint Francis could almost be described as ostentatiously vulgar. But the doorway has the only example in Rethymnon of compound capitals – one of the five orders of Italian Renaissance architecture that I referred to earlier.

The architrave is in a number of overlapping levels, and the large acanthus flower on the keystone is worked in the direction of the ground, which is worth comparing with the keystone at No 48 Arkadiou Street. 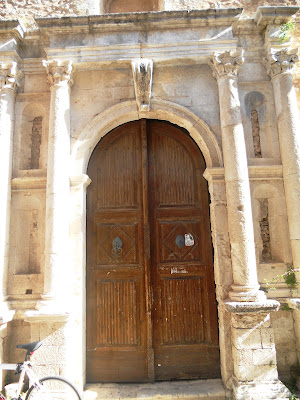 Finally, the monumental doorway at Santa Maria Church – which the Turks converted into the Nerantzes Mosque – has survived intact and is an indication of the splendour of the former Augustinian friary church.

The door may have been modelled on the style of a Roman triumphal arch, which inspired many Italian renaissance architects. A pair of columns, of semi-circular section, with Corinthian capitals, flanks the wide entrance, with tall and narrow recesses in the intervening gaps.

The semi-circular arch is supported on a pair of pillars with simple capitals, and leads up to an emphasised corbel, which takes the place of a keystone. Unlike the pillars, which have no bases of their own, the columns stand on their own plinths. Above the capitals is the entablature, with architrave, dividing band and horizontal cornice, which is not a single unit but has two small recesses above the niches.