From Ealing Abbey to Downton Abbey and Ealing Studios 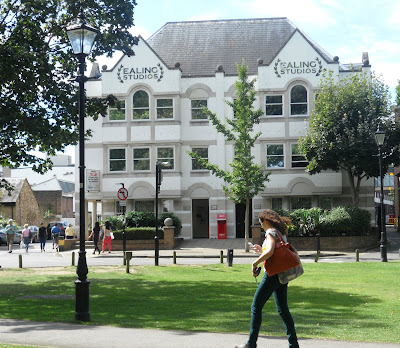 After lunch in Ealing Abbey on Friday afternoon [17 August] I strolled back down to the centre of Ealing to have a look at Ealing Studios, the oldest working film studio in the world and the only British studio that produces and distributes feature films as well as providing facilities.

Ealing Studios stands beside Pitzhanger Manor House, which I visited the day before, and both face onto Ealing Green, just off the High Street and Ealing Broadway.

The main office building facing Ealing Green is now part of the University of West London, and the studios have been developed in recent years into a “leading media centre” housing new stages and studios with state-of-the-art facilities for television and film-making.

But, putting today’s agenda aside, I was reminded how much I enjoyed the great Ealing classics and Ealing has always defined the British Film Industry, from producing the first screen version of Hamlet in 1912, through the 1940s and 1950s with classics that included The Ladykillers, The Lavender Hill Mob, Passport To Pimlico, and Kind Hearts and Coronets.

But Ealing Studios has moved on since then, and over the past 15 years five of the top 20 highest grossing British independent films, including the Saint Trinian’s franchise, have been produced here. Saint Trinian’s, starring Colin Firth, Rupert Everett and Gemma Arterton, became the third most successful UK independent movie within months of its release in 2007.

Ealing has also been home too to Bridget Jones’ Baby, Downton Abbey, and Johnny English – all a long way, I think, from Ealing Abbey in so many ways.

A golden era of British film-making began when Michael Balcon joined Ealing Studios in 1938. He began making a series of real life dramas during World War II. Then as Britain laboured under post-war rationing, Balcon and his team produced a series of classic comedies that captured the spirit of the age.

They included The Ladykillers, The Lavender Hill Mob, Passport to Pimlico and Kind Hearts and Coronets. They have recurring themes that resonated with the social upheaval that came in the wake of World War II: the little people rising up against the establishment; an anarchic whimsy born out of real-life experience; a cast of characters embodying the confusion and moral ambiguity of the times; and, of course, raffish charm.

The BBC bought Ealing Studios in 1955 and over the next 40 years used the studios to create television productions such as Colditz, The Singing Detective and Monty Python.

Later the studios were bought later the National Film and Television School, but by the end of the 20th century they were in decline and were bought by new owners. Ealing Studios has since returned to its core business, producing high profile films like Notting Hill, Star Wars – Episode 2, and Bridget Jones 2.

But my favourite Ealing classics include these six:

Kind Hearts and Coronets (1949) tells the story of Louis D’Ascoyne, a distant poor relative of the Duke of D’Ascoyne, who plots to inherit the title by murdering the eight other heirs who stand ahead of him in the line of succession. In the course of his systematic but undetected elimination of the D’Ascoynes (all played by Alec Guinness), Louis becomes intimate with Edith (Valerie Hobson), the widow of one of the D’Ascoynes he has murdered. This creates some tension with his long-time girlfriend Sibella (Joan Greenwood).

Once he has successfully executed his homicidal plan, Louis inherits the tile he has coveted for so long . However, in a strange twist of irony, he is implicated in a murder that he has not committed, is found guilty, and is imprisoned.

Passport to Pimlico (1949) opens with an unexploded bomb accidentally going off in the London Borough of Pimlico just after World War II. It reveals a trove of ancient documents, granting the area to the Duke of Burgundy. When the residents declare independence from Britain, the area is sealed off the government and services are cut off. Passport controls are set up, but the ‘Burgundians’ fight back. Eventually, the conflict is resolved by a very British compromise and they all celebrate with a street party as the rain begins to fall.

The scenes of well-wishers beating the siege to deliver supplies to the residents of Pimlico must have had a resonance at the time, for the film was shot in the same year as the Berlin Blockade. A generation later, Passport to Pimlico inspired the residents of Freston Road, a street in Notting Hill, to declare independence from the UK as Frestonia in 1977 and applied to join the UN. They even produced their own stamps and passports.

Whisky Galore (1949) is based on the real-life story of the 1941 shipwreck of the SS Politician and the unauthorised spiriting way of its cargo of whisky as Scottish islanders took advantage of an unexpected windfall. When 50,000 cases of whisky are stranded on a ship that runs aground, the inhabitants of a Scottish island sniff an opportunity. Unfortunately, a Home Guard captain (an Englishman) stands in their way.

The Lavender Hill Mob (1950) sees Alec Guinness play the part of Holland, a shy retiring man who dreams of being rich and living the good life. For 20 years, he has worked faithfully as a bank transfer agent for the delivery of gold bullion. One day he befriends Pendlebury (Stanley Holloway), a manufacturer of souvenirs. Holland realises that Pendlebury’s smelting equipment could forge the gold into harmless-looking toy Eiffel Towers that would allow him to smuggle the gold to France. The pair link up with two professional criminals, Lackery (Sid James) and Shorty (Alfie Bass), and the four plot their crime, with unexpected twists and turns.

The Man in the White Suit (1951) is about Sidney Stratton (Alec Guinness), a brilliant but obsessed young researcher, who invents a fabric that never gets dirty and never wears out. From this fabric he makes a white and luminous that wins plaudits from the factory owners. But the management and the unions realise his invention will put the textile industry out of business, and he falls foul of both sides as they battle against his invention.

The climax sees Stratton running through the streets at night in his glowing white suit, pursued by managers and workers. His suit begins to break apart as the chemical structure of the fibre breaks apart with time. Realising his yarn has a flaw, the mob tears off his suit. He is left standing in his underwear, but remains unbowed. It is another story from Ealing Studios of the common man against the Establishment.

The Ladykillers (1955) introduces us to Professor Marcus (Alec Guinness), who rents a room from Mrs Wilberforce (Katie Johnson) as he plans a heist. His gang (Cecil Parker, Herbert Lom, Peter Sellers, Danny Green), posing as a string quartet, dupe the eccentric landlady into delivering the loot from the successful robbery at King’s Cross Station. But as they leave her house, she discovers the crime and decides to tell the police. The gang members draw lots to decide who shall be the lady-killer. This leads the criminals to double-cross and kill each other, leaving all the money in the hands of Mrs Wilberforce.

What are your favourite Ealing Classics?