With the Saints in Lent (11): Saint Polycarp of Smyrna, 23 February 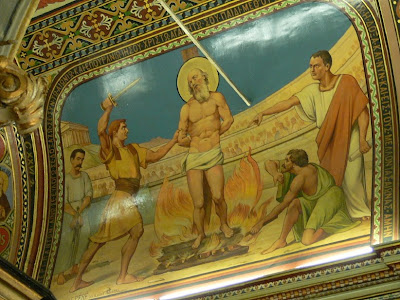 Saint Polycarp (Πολύκαρπος), Bishop of Smyrna and Martyr, is commemorated in the Calendar of the Church today [23 February].

Saint Polycarp was Bishop of Smyrna – known today as Izmir – on the west coast of present-day Turkey. The letters to the Seven Churches in Asia in the Book of Revelation include a letter to the church in Smyrna, identifying it as a church undergoing persecution.

Saint Polycarp, in his turn, was known to Saint Irenaeus, who knew him in his youth and who later became Bishop of Lyons in what is now France.

We have various sources for the life Saint Polycarp:

Saint Polycarp was denounced to the government, arrested, and tried on the charge of being a Christian.

When the proconsul urged him to save his life by cursing Christ, he replied: “Eighty-six years I have served him, and he never did me any wrong. How can I blaspheme my King who saved me?”

The magistrate was reluctant to kill a gentle old man, but he had no choice. Saint Polycarp was sentenced to be burned. As he waited for the fire to be lighted, he prayed:

Lord God Almighty, Father of your blessed and beloved child Jesus Christ, through whom we have received knowledge of you, God of angels and hosts and all creation, and of the whole race of the upright who live in your presence: I bless you that you have thought me worthy of this day and hour, to be numbered among the martyrs and share in the cup of Christ, for resurrection to eternal life, for soul and body in the incorruptibility of the Holy Spirit. Among them may I be accepted before you today, as a rich and acceptable sacrifice, just as you, the faithful and true God, have prepared and foreshown and brought about. For this reason and for all things I praise you, I bless you, I glorify you, through the eternal heavenly high priest Jesus Christ, your beloved child, through whom be glory to you, with him and the Holy Spirit, now and for the ages to come. Amen.

The fire was then lit and shortly after that a soldier stabbed Polycarp to death on the orders of the magistrate. His friends gave his remains an honourable burial, and wrote an account of his death to other churches.

The date of his death is in dispute. Eusebius dates it to the reign of Marcus Aurelius (ca 166-167). However, a later addition to the Martyrdom of Polycarp dates his death to Saturday, 23 February in the proconsulship of Statius Quadratus, which puts his death at 155 or 156.

With Saint Clement of Rome and Saint Ignatius of Antioch, Saint Polycarp is regarded as one of three chief Apostolic Fathers. 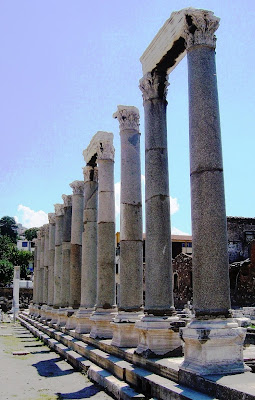 The Agora in Smyrna ... all that remains of the classical and biblical city (Photograph: Patrick Comerford)

O God, the maker of heaven and earth, who gave to your Venerable servant, the holy and gentle Polycarp, boldness to confess Jesus Christ as King and Saviour, and steadfastness to die for his faith: Give us grace, following his example, to share the cup of Christ and rise to eternal life; through Jesus Christ our Lord, who lives and reigns with you and the Holy Spirit, one God, now and for ever.