Back on the Pugin trail again 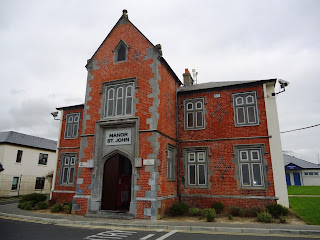 After a long absence, I am back on the Pugin trail, finding, photographing and cataloguing Pugin’s buildings throughout Ireland.

Two years ago, when I was in Waterford, I was given a guided tour of the Convent Pugin had designed for the Presentation Sisters. But try as I might, I could not find Manor of Saint John, the Gothic house designed by AWN Pugin for Sir Thomas Wyse (1791-1862).

The National Library of Ireland holds a letter from Pugin written ca 1842 to Sir Thomas Wyse, with plans and drawings for proposed Manor of Saint John. The letter gives Pugin’s views on Thomas Wyse’s plans, includes a layout plan and two sketches, one of an intended chapel and one of his plans for the front elevation of the manor. The letter also contains two sketches of the Tapestry Room in Bayons Manor, the home of Alfred Lord Tennyson, and further design notes. With it, are two letters ca 1838-1840 from the architect Charles Barry to Thomas Wyse.

I was staying in the Viking Ramada Hotel on the Cork Road in Waterford last night, and I was not going to give up on my search for this Pugin-designed house. 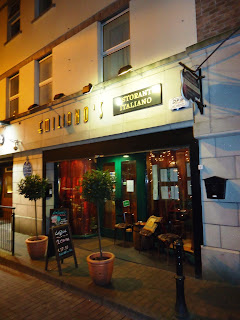 But before searching for the house, two of us went out for dinner last night in Emiliano’s Italian Restaurant in High Street, Waterford. Despite the modern facade, Emiliano’s is housed in a 15th century town house given by the Mayor of Waterford, James Rice, to the Dean of Waterford, on 4 April 1466.

This is nothing short of the perfect Italian restaurant – from the welcome at the front of house through to the menu, the wine list, the food and the service. 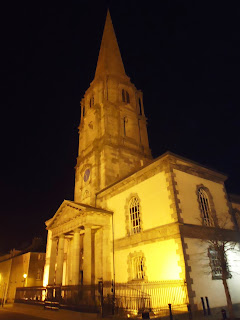 Afterwards, we strolled through the city’s cathedral quarter under an almost full moon. Looking at Christ Church Cathedral, I wonder whether the mid-15th century Dean of Waterford knew the good use the house he had received from the mayor would be put to almost five and half centuries later.

This morning, we set out for second time in search of the Manor of Saint John, and eventually found it in a middle of a housing state at the back of the site of the former Waterford Crystal factory.

Today Manor Saint John hosts a variety of youth services providing learning, development and recreational opportunities for young people. I was shown around the house, where the facilities include games rooms, sports hall, a youth cafe, meeting and training rooms, a community garden, outside all-weather multi-game playing surfaces, health and fitness gym and much more.

Sir Thomas Wyse inheriting his family’s vast entire estates, and took a leading role in the famous 1826 election campaign with Daniel O’Connell. He was the election agent of the pro-emancipation candidate Villiers Stuart who inflicted a dramatic defeat on Lord George Beresford in Co Waterford, a success that encouraged O’Connell to contest the Co Clare by-election in 1828.

In 1830, Thomas Wyse was elected MP for Co Tipperary. A year earlier, he had been elected to Waterford City Council, and he was MP for the city from 1835 until he lost his seat to a more radical Young Irelander in 1847.

Thomas is better remembered today for his marriage to Letitia Bonaparte, a niece of the Emperor Napoleon Bonaparte. They met while he was on the Grand Tour in Italy and they were married in 1821 in Viterbo.

Back in Waterford, Thomas, was appointed one of the Commissioners for the building of the new Houses of Parliament in London. Pugin was one of the architects, and Thomas engaged him to design the new Manor of Saint John at Roanmore.

After losing his seat in Parliament, Thomas was appointed the British Ambassador to Greece. He was knighted for his securing Greek neutrality during the Crimean War and when he died in 1862 he was given a Greek state funeral in Athens.

His Pugin manor house once displayed the Napoleonic Imperial Eagle over the entrance door, elegantly cut in stone by a local sculptor, M. Carew. 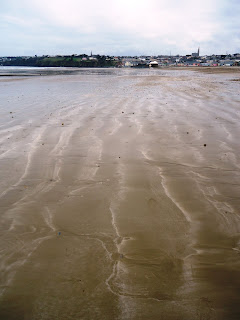 Walking on the beach in Tramore, Co Waterford, this morning (Photograph: Patrick Comerford, 2013)

After a warm welcome at the Manor of Saint John and a full tour of the house, we headed out along the Cork Road to Tramore for a walk on the beach. There was a slight mist and a chill in the wind, but there was a feeling too that Spring is in the air, and we decided to continue on the road along Co Waterford’s Copper Coast, which runs from Fenor in the east to Stradbally in the west.

It took 460 million years of movement of oceans, volcanoes and ice sheets to create this 25 km of spectacular coastline. Along the way, there are countless beaches, coves, and little fishing harbours, cliffs tumbling down to the sea, rocky headlands and open rolling countryside.

The copper mines were worked until the 19th century, and we stopped to see the remains of a mine and its open shafts. A little further on, we stopped at Bunmahon, but we were out of season and the Copper Coast Centre, housed in a former Church of Ireland Parish Church, was closed.

Before we reached Dungarvan, we stopped at Clonea Beach and had lunch in the Clonea Strand Hotel beside the Gold Coast Golf Resort.

After lunch, we drove through Dungarvan, and decided to continue on the coast road, climbing up above Ring and Helvick Head, and on to Ardmore. 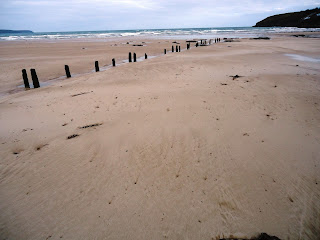 On the beach in Ardmore, Co Waterford, this afternoon (Photograph: Patrick Comerford, 2013)

It is years since I was in Ardmore – the last time was when I was a child on my grandmother’s farm outside Cappoquin, and this had been a favourite destination for family outings to when we then called the “seaside.”

We climbed the road up above Ardmore to look around Saint Declan’s “Cathedral,” to see the round tower and the saint’s “oratory,” and then returned for a walk on the beautiful, unspoilt, clean sandy beach.

We had coffee and cakes in Whitehorses, a family-run enterprise, run by three sisters in a former grocery shop on the Main Street. We left regretting that we had waited until we got here to have lunch.

By-passing Cappoquin, we passed through the Kncokmaeldown and Comeragh Mountains to Clonmel, and on to Kilcash on the slopes of Slievnamon, to see the castle and graveyard that are celebrated in Irish folklore and song.

We then drove on to Callan, passed the Comerford ancestral home at Ballybur, and after Kilkenny joined the motorway to Dublin. It was dark when we got home. I thought Kilcash and Saint Declan’s monastic site in Ardmore were stories for other days.

Hello, I'm from Waterford, did you manage to find the pugin style house in the end ?

Oh yes, Rob, read on, and you'll see how I got a warm welcome and saw the variety of groups using the house, Patrick