The Towers near Lismore,
architectural follies and
reminders of the Famine 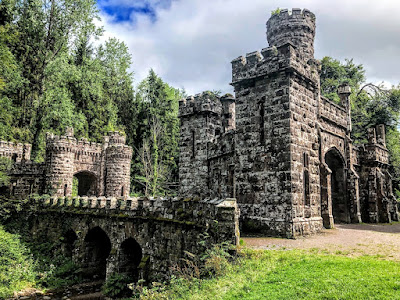 I remember how as a child in Cappoquin I was brought to see the Towers and lodges at Ballysaggartmore, imposing gothic-style ‘follies’ near Lismore, Co Waterford, that perhaps influenced my later architectural tastes.

They stand in a pleasant woodland setting, with forest walks and picnic areas, and are also associated with Claud Anson, a brother of the 3rd Earl of Lichfield, and his wife, Lady Clodagh Anson, part of the literary circle in West Waterford in the mid-20th century.

But, despite a childhood delight in their fairy-tale setting, the true, the behind-the-scenes stories of the Towers are set in sad period in history. I returned to see them last week as part of my ‘road trip’ visit to Cappoquin and Lismore on the return journey from Youghal, Co Cork, to Askeaton, Co Limerick.

The Ballysaggartmore demesne is about 2.5 km outside Lismore. The Towers are two sets of ornate entrance lodges, with one set also serving as a bridge. They were built around 1834, in the decade before the Famine, by a wealthy, local landlord, Arthur Keily, later Arthur Keily-Ussher.

At the turn of the 18th and 19th centuries, John Keily bought 8,500 acres at Ballysaggartmore from George Holmes Jackson of Glenmore, and built a new house.

When Keily died in 1808, the best part of his estate, including Strancally, was inherited by his elder son, John Keily, who was Tory MP for Clonmel in 1819-1820. John Keily commissioned the Limerick-based architects, brothers George and James Pain, to build Strancally Castle, between Lismore and Youghal, on the west bank of the River Blackwater.

John Keily’s younger brother, Arthur Kiely, inherited Ballysaggartmore and when he returned to Co Waterford from the Napoleonic Wars in 1817, he built a new house at Ballysaggartmore. However, he decided in the 1830s decided that this house was not grand enough for his needs or social aspirations.

It is said his plans were driven largely by his wife Elizabeth, who demanded a residence as grand as her brother-in-law’s home at Strancally Castle. Elizabeth (née Martin) was from Ross House, Co Galway, and a great-aunt of the author Violet Martin.

Local lore suggests that the Towers and lodges were built as a prelude to the extravagant mansion Keily-Ussher planned. A report in 1834 indicates they were designed by the head gardener, John Smyth, and that the main entrance gates were forged locally for £150.

But Arthur Keily-Ussher was a harsh landlord, evicting tenants unable to pay their rents during the Great Famine (1845-1849). Once the towers, lodge and bridge were complete, Arthur and Elizabeth turned to ‘improving’ their estate. This largely involved clearing the land of the sitting tenants and many of their cottages.

Their social ambitions were unbridled, and in 1843 Arthur changed his surname to Keily-Ussher – the Usshers were a long-established family in the area and the Keily brothers were related to them through their mother.

But their ambitious plans started to unravel on Arthur and Elizabeth. They quickly ran out of money, and their dream of living in the grandest house in Co Waterford turned into a nightmare. Their impressive carriageway and gatehouses would never lead to the mansion they planned. 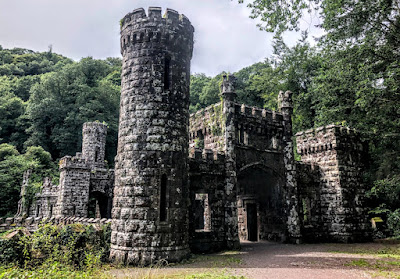 The Towers and lodges stand like an abandoned Disneyland fantasy (Photograph: Patrick Comerford, 2021)

During the Famine, the population of Co Waterford fell by more than 50 percent. The few remaining tenants on the estate were starving and unable to pay their rents. Unlike many neighbouring landlords, Arthur Keily-Ussher refused to suspend or reduce the rents. Instead, he used non-payment to justify evicting tenants and levelling their homes. Several hundred families were evicted in 1847, making it one of the largest clearances during the Famine.

A report in the Cork Examiner on the Ballysaggartmore estate in 1847 describes ‘famished women and crying children’ cowering in the ruins of their burned cottages. In contrast, Arthur’s brother John was a benevolent landlord at Strancally Castle, killing his own cows and spending £1,000 in just nine months to feed starving people.

Arthur Keily-Ussher remained deeply unpopular after the Famine. An attempt was made to shoot him as he entered the estate through the gates. The gun misfired and the would-be assassin, John Keeffe, fled on foot. Seven men were tried, convicted and deported to Tasmania.

The trial made Keily-Ussher even more unpopular. Then, without tenants to pay rents that provided an income, his fortunes ran out. When the Encumbered Estates Court put Ballysaggartmore up for sale in 1854, it failed to sell. 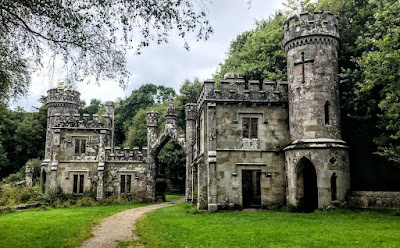 The Woodroofes remained at Ballysaggartmore until the early 20th century, when the place was bought by the Hon Claud Anson (1864-1947), a younger son of Thomas Anson (1825-1892), 2nd Earl of Lichfield.

Before coming to Lismore, Claud Anson had been a rancher in Texas. He married Lady Clodagh de la Poer Beresford (1879-1957), daughter of the 5th Marquess of Waterford, in 1901, and they returned to live in her native county. However, they did not enjoy the place for long, and their funds ran out. According to Patrick Cockburn, a godson of their daughter Clodagh Anson (1902-1992), who lived in Youghal, they lost their fortune through Claud’s investment in Russian bonds prior to the Revolution.

During the Irish Civil War, Ballysaggartmore House was attacked by the anti-treaty IRA and destroyed by fire in 1922. The Ansons moved to Ardmore, and Lady Clodagh Anson became part of a literary circle in West Waterford. Her books include Book (1931), Discreet Memoirs (1932), Another Book (1937) and Victorian Days (1957). She was also known for her voluntary work with homeless people on the streets of pre-war London.

Claud died in 1947, Clodagh died in 1957; her epitaph in Ardmore says, ‘she never failed to help those in need.’ Their nephew, Thomas Anson (1883-1960), 4th Earl of Lichfield, was grandfather of the photographer Patrick Lichfield.

After the house was destroyed by arson, it stood empty and derelict for some decades before being pulled down. For a time, one of the lodges continued to be used as a private residence. 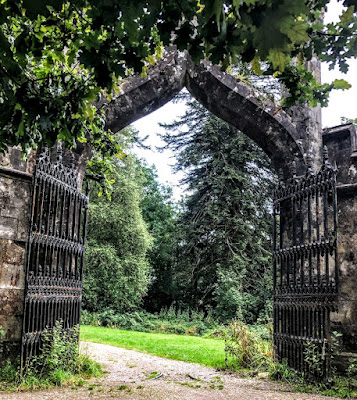 The entrance gates were forged locally in Lismore for £150 (Photograph: Patrick Comerford, 2021)

The Towers form a picturesque composition, combining a bridge and two lodges in an integrated design. Although, at first sight, the lodges look identical, each has individual, distinguishing features.

Many of their fittings were lost when the towers were dismantled in the 1930s. The rock-faced sandstone produces an attractive textured visual effect and shows the high quality of the stone masonry.

Between the towers, a three-arch, rock-faced, sandstone ashlar Gothic-style bridge crosses a ravine with grassy banks.

The Gateway is disused and derelict but is an impressive structure in a fantastical Gothic style, combining a gateway and flanking gate lodges in an integrated composition. Most of the external and internal fittings, including the walls and floors, were removed when the gateway was dismantled around 1935. But it retains most of its original form, with high quality stone masonry and craftsmanship.

After the Ansons left, the Towers and lodges fell into ruin and were un-roofed. Today they stand in forested land, with a walking trail through the woodland, and with picnic and parking areas. They stand like an abandoned Disneyland fantasy, reminders of a cruel landlord who was the architect of his own downfall in the Famine era. 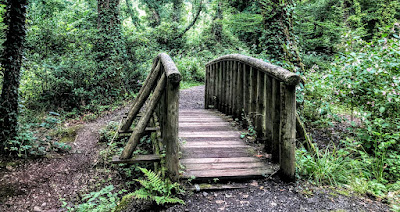 Today the Towers stand in forested land with a walking trail through the woodland (Photograph: Patrick Comerford, 2021)