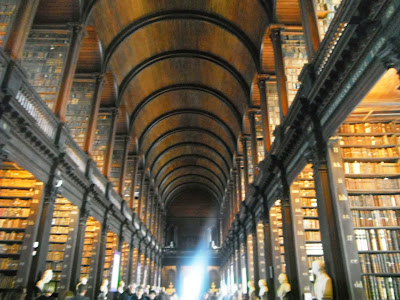 The arched, vaulted ceiling of the Long Room in the Old Library in Trinity College Dublin (Photograph: Patrick Comerford, 2013)

I spent most of this morning at a course management committee meeting in Trinity College Dublin, or – as it was officially incorporated – the College of the Holy and Undivided Trinity of Queen Elizabeth near Dublin.

In conversation over an early morning coffee in the Arts Building, some of us mused that every university and college on these islands must have its ugly building: Christ’s College, Cambridge, has its ‘Typewriter Building’ or New Court, built in 1966-1970; Sidney Sussex College, Cambridge, has Blundell Court, which was built in 1967 – but inside the rooms are comfortable and the building has been greatly improved with an additional floor, the Gledhill Skyline, which was added recently; and TCD has the Arts Block, built between 1968 and 1979, and added to in 2001-2003, when a new top floor was added to the original building.

The Arts Building in TCD has two distinct elevations: one to Nassau Street where it is set back from the street behind the high railings; and to other to Fellows’ Square, which it forms with the Old Library and the Berkeley Library. The BLU (Berkeley Lecky Ussher) Arts library complex includes the Berkeley Library in Fellows Square, built in 1956, the Lecky Library, attached to the Arts Building, the James Ussher Library (2003), overlooking College Park, and the Long Room Hub, and the 1937 Reading Room.

The Library began with the founding of TCD in 1592. It was first endowed by Archbishop James Ussher, who gave Trinity his own valuable library, with several thousand printed books and manuscripts.

The Old Library is Thomas Burgh’s architectural masterpiece. At one time, it towered over the university and the city. Since 1801, this has been a copyright library, and it is now Ireland’s largest library, occupying several buildings. 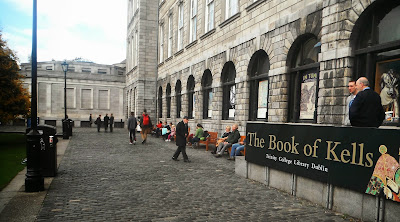 The Old Library is the third most visited tourist attraction in Dublin City (Photograph: Patrick Comerford, 2013)

Although it is now autumn, from early morning today tourists were queuing outside in Fellows’ Square to see the Book of Kells – by far the most famous book in the Old Library, although the exhibition area also displays the Book of Durrow and other ancient texts.

A major refurbishment was carried out on the ground floor in 1992 to provide the Exhibition Area, the Treasury Room, which now houses the Book of Kells, and the Library Shop.

Upstairs, the Long Room holds thousands of rare and very early, volumes. In the 18th century, the library received the Brian Boru harp, one of the three surviving mediaeval Gaelic harps, and a national symbol of Ireland.

The Long Room, which is the main chamber of the Old Library, is 65-metres long. Built between 1712 and 1732, it houses 200,000 of the Library's oldest books. By the 1850s, the room needed to be expanded as the shelves were filled, and so the roof was raised to accommodate an upper gallery. 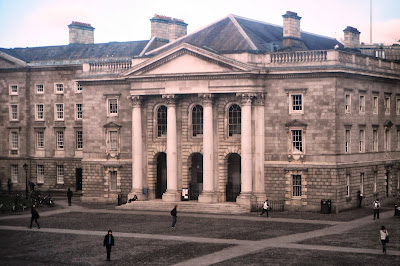 Looking out onto the Chapel and Parliament Square from the Henry Jones Room in the Old Library in TCD this morning (Photograph: Patrick Comerford, 2013)

Our meeting this morning in the Henry Jones Room in the Old Library, on the same floor as the Long Room, at the west end, overlooking Front Square on one side and Fellows’ Square on another.

Access to the room is restricted to TCD staff, so tourists, visitors and even students often pass through the library and the Long Room without knowing of its existence or its name. Yet the name of the Henry Jones Room survives as a reminder of the centuries-old connection between the bishops of the Church of Ireland and Trinity College Dublin – the room is named after the Bishop of Meath, Henry Jones, who in presented the Book of Kells to the college over 350 years ago in 1661.