Discerning Vocation in the Catholic Tradition 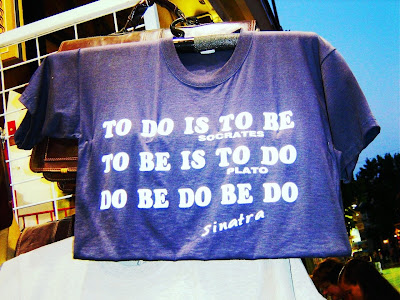 Being and doing: Socratic wisdom on sale in the Plaka in Athens (Photograph: Patrick Comerford)

Discerning Vocation in the Catholic Tradition

Come to him, a living stone, though rejected by mortals yet chosen and precious in God’s sight, and like living stones, let yourselves be built into a spiritual house, to be a holy priesthood, to offer spiritual sacrifices acceptable to God through Jesus Christ. But you are a chosen race, a royal priesthood, a holy nation, God’s own people, in order that you may proclaim the mighty acts of him who called you out of darkness into his marvellous light. – (I Peter 2: 4-5, 9)

In the past, there has been a conflict between the different and polarised perspectives of priestly ministry – whether we emphasised being or doing.

And the emphasis at each end of the spectrum determined how we discerned vocation and how we trained people for ordained ministry.

One of my favourite T-shirts, which I saw in the Plaka in Athens, says: “To do is to be, Socrates. To be is to do, Plato. Do-be-do-be-do, Sinatra.”

Making our priority in vocation and ministry one that puts its emphasis on being rather than doing, may have been characteristic of the Catholic approach to vocation and its discernment within the Catholic tradition of Anglicans. Emphasis role and function, and therefore doing, might have been more common among Evangelicals.

But I disagree. Emphasising being rather than doing is getting back to discerning what we should be as priests and in terms of our spiritual lives, spiritual priorities, spiritual values, our spirituality. Yet both emphases must be present in discerning vocation and training for ordination, and we must seek to keep them together, not in tension but in creative tension, from Selection Conferences, through the programme here at the Church of Ireland Theological Institute, and that must continue long after ordination, for as long as people are in ordained ministry, as deacons, priests and bishops.

It is fifty years next February since the former Divinity Hostel moved in these, giving us a half century here of uninterrupted engagement in discerning vocation and training people for the ministry.

Over those fifty years, there has been both continuity and change, and change has demanded and created many new approaches.

No longer do eager undergraduates sit by a cosy fireside in the Divinity Hostel, discussing an eclectic reading list.

No longer are potential ordinands expected to spend their undergraduate years learning Syriac, Hebrew, Aramaic and Greek at the feet of Professors such as RM Gwynn, Eric Woodhouse and Jacob Weingreen, preparing for the old GOE, the “Div Test”, a Diploma or an add-on course, or even during for a four-year moderatorship in Hebrew and Philosophy (then known as Mental and Moral Sciences).

Times have change here. But so too has the world, and so too have the expectations and demands of the world and the church changed.

We once expected ordinands to learn theory here. Theological principles about doctrine and liturgy, and Biblical studies and languages formed the core subjects, and they were expected to learn the practice, to engage in praxis, on the ground, partly through placements but more especially during three years of a first curacy.

Sometimes their spiritual formation, growth and development was a consideration that often feel between the cracks in the floorboards, so they left with the same spirituality they had when they were first selected. This led to a cul de sac: there was no possibility of growth when there was no openness to the spirituality of other ordinands.

There were two or three years of theory in prayer and liturgy, but little or no attention was paid to spiritual formation.

But things have changed in the curriculum here. At one time, once you came in here, although in principle you were selected for training, it was more or less accepted that you were going to be ordained … and almost exclusively for a parish where you shared the spiritual exclusivity of the rector.

Throughout those two or three years, little attention was paid to continuing vocational discernment. Your family, friends and neighbours thought you had “gone into the Church” and it was all more-or-less decided from then on.

But vocational discernment must be a continuing process, not just for students, but for deacon, priests and bishops too.

The House of Bishops has identified eleven key characteristics which form the primary filter through which the institute seeks to deliver all we do here:

And that is reflected here, beginning with Spirituality and ending with Vocation. 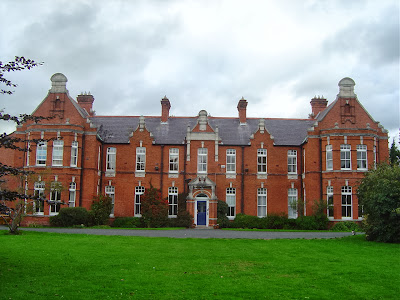 How do we reflect the eleven key characteristics in the process of discerning vocation at CITI? (Photograph: Patrick Comerford)

How do we reflect that here?

Starters and openers are often indications of how things are going to unfold. We know from the start of a play, with the mood created by the lighting, the sets, the props and the curtain openings, whether we are attending a comedy or a tragedy; the music at the beginning of a movie or a television drama, the music, even the titles, should tell you what to expect.

And so it is the same here with beginnings. Each week here begins with a ‘Spirituality’ hour in the chapel on Monday mornings. Within the chapel setting of prayer and worship, this semester [Semester I, 2013-2014] includes presentations on Anglican, Catholic, Celtic and Advent spirituality, for example, and next semester we shall look at Evangelical, Jewish and Old Testament spirituality and the Jesus Prayer. With the full-time students, while the part-time students will engage with topics such as Benedictine, Puritan and Wesleyan Spirituality, the Spirituality of the Psalms and Cinema, and the Spiritual Disciplines.

So, Spiritual Formation for ministry is at the heart of what we are doing here, and that new emphasis on a rounded, balanced and holistic spirituality is symbolised in how we start the week, how we expect students to prioritise and balance a life of work, study and prayer, and how we expect them to continue in a process of discerning their vocations.

Maurice Elliot, in an interview in the Church of Ireland Gazette last week [4 October 2013] spoke of how “We enjoy a superbly rich community prayer life in chapel and worship is as ever grounded in the spirituality of The Book of Common Prayer.”

We emphasise the importance of ordinands noting their own feelings and reactions as they journey together on this course, to note their prayer life, and while maintaining confidences, to feel open and free about sharing their observations.

Spirituality is distinct from “prayer.” I can describe prayer as making myself available to God for some sense of communication or communion, either as individual or as part of a wider group, such as a Sunday morning congregation, as a group of students and staff in chapel, in a prayer group or in a tutorial group.

On the other hand, spirituality is concerned with how my spirit makes this communion. It is concerned with my “disposition” of spirit in our relation with God. For example, I might want to communicate with God by my art – that is a question of prayer style. How I make that communication through my art – for example, do I seek the God in the world around me or use my art to transcend what I see about me? – is a question of spirituality, and as such feeds into the process of vocational discernment. 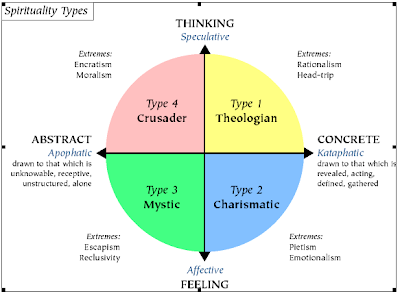 Spirituality types, based on the work of Corinne Ware and Urban Holmes

Obviously there is a wealth of spirituality available with which many people have never experimented, either through ignorance or hesitation in trying something that is seen as “different,” belonging exclusively to other traditions. For students are not being prepared for ordination within their own tradition, but for priestly ministry in the whole Church of Ireland, indeed priestly ministry in the whole Church of God.

Developing an understanding and a greater appreciation of my own personal spirituality is essential in helping me to appreciate and accept other people’s spirituality. Too often we can fall victim to the mentality that “what is different” must be “wrong.” We all have a unique relationship with our God, and each person is called to journey with God in a way that is unique and particular to that person.

Unless we seek to develop a spirituality that is appropriate for ordained ministry, unless we are in touch with changes in that personal spirituality, how can we help others to get in touch with their spirituality and to grow and to be aware of the opportunities for growth, for change, and for deepening their own spiritual lives?

And we need to know – as one bishop succinctly put it to me – the difference between: “The Law of Supply and Demand” and “The Law of Demand and Supply.”

Supply and Demand, Being and Doing

If you fail to prepare and plan for your spiritual life in ministry, as priests, if you don’t plan nurture it, grow it, and rejoice in its unfolding and development, you will too easily forget what we are ordained to supply and encourage others to demand it, and instead end up responding to the demands of others and supplying those demands.

Sotirios Christou, an Anglican priest in Cambridge, in his book, The priest and the people of God: A royal priesthood, neatly summarises three images of priestly formation.

First, he describes the Trinitarian images of priestly formation as involving:

Secondly, he points out the traditional images of priestly formation, involve these (and they are words that are heard at the ordination to the priesthood):

Being and doing: back to my favourite T-shirt in Athens (Photograph: Patrick Comerford)

Christopher Cocksworth (right, former Principal of Ridley Hall and Bishop of Coventry since 2008) and Rosalind Brown (below, Canon of Durham Cathedral), in their book, Being a Priest Today: Exploring priestly identity, provide some useful categories for thinking about the root, shape and fruit of the “Priestly Life.”

Firstly, the Root of Priestly Life is found in:

Secondly, the Shape of Priestly Life is found in:

Thirdly, the Fruit of Priestly Life is found in:

That emphasis on prayer, worship, holiness and blessing was also at the heart of Archbishop Michael Ramsey’s understanding of priesthood and spirituality. In his seminal book, The Christian Priest, he summarised the definition of the priest as:

And so, these characteristics for priestly ministry, however you list them, however you prioritise them eventually begin to converge. And part of the new approach here is to seek and discern vocation throughout the three years that students are here, two-years as full-time residential student and one year as intern deacons, before proceeding to ordination as priests.

It is a continuing process that begins rather than finds completion at Selection Conference and setting out on the Foundation Course.

Speaking at the celebrations to mark the fifteenth anniversary of the foundation of Affirming Catholicism, Bishop David Stancliffe, said:

God does not give any of us a vocation simply to suit ourselves or to be purely self-fulfilling. The nature of a vocation is that it looks outward to the Church and to the world; a true vocation will serve others as well as serving ourselves.

And in that sense, this is what we are trying to do here. The challenge only begins here. The process of vocational discernment that begins here, must continue throughout ministry, among deacons, priests and bishops too, as we seek to follow God’s leadings, not for our own sake but for the sake of Christ who is calling the world through the Church into the Kingdom of God.