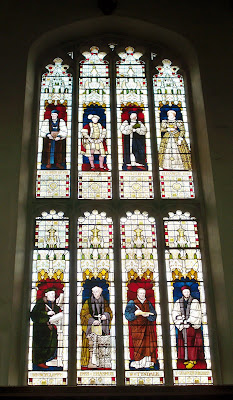 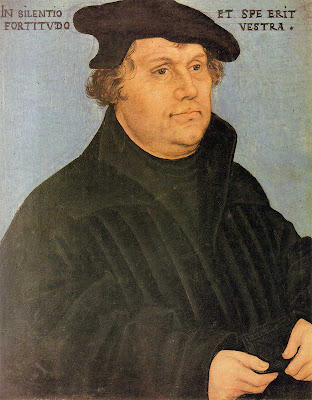 Martin Luther was a German Augustinian friar, priest and professor of theology who played a key role in initiating the European Reformations. Luther strongly disputed the claim that freedom from the punishment of sin could be bought with money. He challenged the sale of indulgence with his 95 Theses in 1517. His refusal to retract his writings at the demand of Pope Leo X in 1520 and the of the Emperor Charles V at the Diet of Worms in 1521 led to his excommunication by the Pope and condemnation as an outlaw by the Emperor.

Luther taught that salvation is not earned by good deeds but is received only as a free gift of God’s grace through faith in Christ. His theology challenged the authority of the Pope by teaching that the Bible is the only source of divinely revealed knowledge.

His translation of the Bible into German, instead of Latin, made it more accessible, and had a major impact on the church and on German culture. His hymns influenced the development of singing in churches.

Luther’s 1524 creedal hymn Wir glauben all an einen Gott (We All Believe in One True God) is a three-stanza confession of faith prefiguring his 1529 three-part explanation of the Apostles’ Creed in the Small Catechism. Luther’s hymn, adapted and expanded from an earlier German creedal hymn, gained widespread use in vernacular Lutheran liturgies as early as 1525.

Luther’s 1538 hymn version of the Lord’s Prayer, Vater unser im Himmelreich, corresponds exactly to Luther’s explanation of the prayer in the Small Catechism. The hymn served both as a liturgical setting of the Lord’s Prayer and as a means of examining candidates on specific catechism questions.

Luther wrote Aus tiefer Not schrei ich zu dir (From depths of woe I cry to you) in 1523 as a hymn version of Psalm 130 and sent it as a sample to encourage his colleagues to write psalm-hymns for use in worship. In collaboration with Paul Speratus, this and seven more hymns were published in the first Lutheran hymnal, the Achtliederbuch.

In 1524, Luther developed his original four-stanza psalm paraphrase into a five-stanza Reformation hymn that developed the theme of “grace alone” more fully. Because it expressed essential Reformation doctrine, this expanded version of Aus tiefer Not was designated as a regular component of several regional Lutheran liturgies and was widely used at funerals, including Luther’s own.

In his short and simple work, A Simple Way to Pray (1535), Luther sets out an approach to prayer based on reading Biblical passages such as the Lord’s Prayer (Matthew 6: 9-13) and the Ten Commandments (Exodus 20: 1-17). He sets out aid to prayer based on a four-fold interaction with the Biblical text.

The four basic elements which he weaves together to provide his “garland of prayer” are:

On the evening of 17 February 1546, Luther experienced chest pains. When he went to his bed, he prayed: “Into your hand I commit my spirit; you have redeemed me, O Lord, faithful God” (Psalm 31: 5), the common prayer of the dying. At 1 a.m., he awoke with more chest pain, and thanked God for revealing his Son. His companions, Justus Jonas and Michael Coelius, shouted loudly: “Reverend father, are you ready to die trusting in your Lord Jesus Christ and to confess the doctrine which you have taught in his name?” Luther’s reply was a distinct “Yes.” 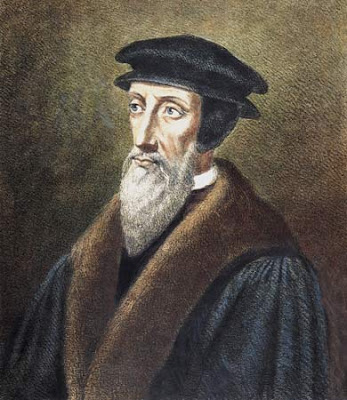 John Calvin ... pointed out that to know God is to be changed by God

John Calvin was al French theologian and a principal figure in the development of the Reformed or Calvinist tradition. Calvin originally trained as a humanist lawyer, and his breach with Church came around 1530. When religious tensions provoked a violent uprising against Protestants in France, Calvin fled to Basel in Switzerland, where he published the first edition of the Institutes of the Christian Religion (1539).

He went on to engage with Church reforms in Geneva and Strasbourg, where he became the minister of a church of French refugees. He continued to support the reform movement in Geneva, and was eventually invited back to lead the church there. In Geneva, he struggled unsuccessfully to have weekly celebrations of the Eucharist, and taught the notion of a “virtual presence” by which the power of Christ was united to the communicant by the work of the Spirit.

Calvin pointed out that to know God is to be changed by God; true knowledge of God leads to worship, as the believer is caught up in a transforming and renewing encounter with the living God.

His spirituality has three principle characteristics. It is: 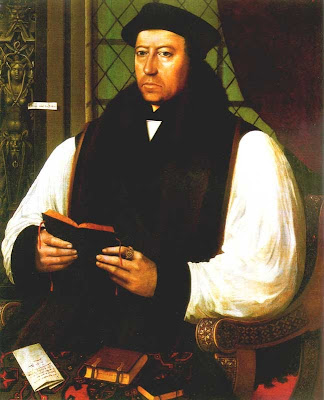 Thomas Cranmer … his legacy includes the Book of Common Prayer, the Collects and the 39 Articles

Thomas Cranmer, the ‘Father of the Prayer Book,’ was a leader of the English Reformation and Archbishop of Canterbury during the reigns of Henry VIII, Edward VI and (briefly) Mary I. He built a favourable case for Henry VIII’s divorce and supported the principle of royal supremacy.

As Archbishop of Canterbury, he was responsible for establishing the first doctrinal and liturgical structures of the Church of England. He did not make many radical changes in the Church, but succeeded in publishing the first officially authorised vernacular service, the Exhortation and Litany

With the accession of Mary I to the throne, Cranmer was tried for treason and heresy, and was executed in Oxford in 1556. On the day of his execution, he dramatically withdrew his recantations. As the flames drew around him, he placed his right hand into the heart of the fire and his dying words were, “Lord Jesus, receive my spirit... I see the heavens open and Jesus standing at the right hand of God.”

His legacy lives on through The Book of Common Prayer, although It is difficult to ascertain how much of the Prayer Book is actually Cranmer’s personal composition, and through the 39 Articles, which are part of his legacy although not his composition. But we can agree that his chief concern was to design corporate worship to encourage a lively faith. 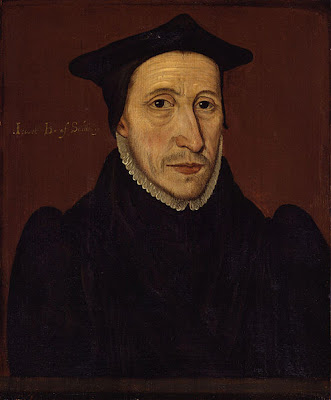 John Jewel ... literary apologist of the Elizabethan settlement and the author of Apologia ecclesiae Anglicanae

John Jewel, Bishop of Salisbury, is seen as the First Anglican Apologist, and as the literary apologist of the Elizabethan Settlement. His Apologia ecclesiae Anglicanae (1562) is the first methodical statement of the position of the Church of England. It forms the groundwork for all subsequent controversy, and is his attempt to provide a statement of faith for the Church of England during the reign of Elizabeth I and to answer challenges and accusations of the day.

When Jewel discusses the sacraments, he emphasises that it is not the sacraments themselves but the faith of the individual that effects salvation. On this point, Jewel appeals to several Church Fathers:

“The faith of the sacraments,” saith St. Augustine, “justifies, and not the sacrament.” And Origen saith, “He [Christ] is the priest and the propitiation, and the sacrifice; and that propitiation comes to every one by way of faith.” And, therefore, agreeably hereunto, we say that the sacraments of Christ do not profit the living without faith” (Apology, II.17).

But he also says:

In the Lord’s Supper, there is truly given unto the believing the body and blood of the Lord, the flesh of the Son of God, which quickeneth our souls, the meat that cometh from above, the food of immortality, grace, truth, and life; and the Supper to be the communion of the body and blood of Christ, by partaking whereof we be revived, we be strengthened, and be fed unto immortality, and whereby we are joined, united and incorporate unto Christ, that we may abide in him, and he in us. (Apology).

Similarly, Jewel says: “For, although we do not touch Christ with our teeth and mouth, yet we hold him fast, and eat him by faith, by understanding, and by the spirit” (Apology, II.15).

Richard Hooker’s statue at Exeter Cathedral ... ‘the most influential theologian in the Anglican reformation

Throughout Of the Laws of Ecclesiastical Polity (1593), Hooker makes it clear that theology involves prayer and is concerned with ultimate issues, and that theology is relevant to the social mission of the Church.

Writing on Prayer, he says: “When we are not able to do any other thing for men’s behoof, when though maliciousness or unkindness they vouchsafe not to accept any other good at our hands, prayer is that which we always have in our power to bestow, and they never in theirs to refuse.” – Of the Laws of Ecclesiastical Polity, V.23.1

When it comes to ritual disputes in liturgical matters, he writes: “Customs once established and confirmed by long use, being presently without harm, are not in regard of their corrupt original to be held scandalous” – Of the Laws of Ecclesiastical Polity, IV.12.4

The tomb of Lancelot Andrewes in Southwark Cathedral ... “his prayers and sermons were critical in TS Eliot’s conversion to Anglicanism and had an abiding influence on his writings (Photograph: Patrick Comerford)

TS Eliot, in his essay, For Lancelot Andrewes: an Essay on Style and Order (1928), argues that Andrewes’s sermons “rank with the finest English prose of their time, of any time.” Eliot spoke of his indebtedness to the bishop’s writings: he is “the first great preacher of the English Catholic Church,” and he had “the voice of a man who had a formed visible church behind him, who spoke with the old authority and the new culture.”

“The writings of both Hooker and Andrewes illustrate that determination to stick to essentials, that awareness of the needs of the time, the desire for clarity and precision on matters of importance, and the indifference to matters indifferent, which was the general policy of Elizabeth … Andrewes is the first great preacher of the English Catholic Church.”

5.1: The nature and theology of sacraments
5.2: Traditions of prayer (3): seminar, patterns of prayer today (including all-age worship, participation of children in worship, worship and youth).

Canon Patrick Comerford is Lecturer in Anglicanism and Liturgy, the Church of Ireland Theological Institute. This is essay is based on notes for comments during a seminar on 14 October 2013 as part of the Module EM8824: Liturgy, Worship and Spirituality on the MTh course.
Posted by Patrick Comerford at 15:00