Art for Advent (10): The Church of ‘Il
Redentore’ in Venice, by Canaletto

The Church of Il Redentore in Venice by Canaletto

My choice of a painting to think about during Advent this morning [10 December 2013] is one of the many paintings by Canaletto (1697-1768) of the Church of Il Redentore in Venice.

Canaletto or Giovanni Antonio Canal painted many versions of this scene in oil on canvas.

The Church of Il Redentore, or The Redeemer, was commissioned by the Venetian Senate in 1576 as a thank-offering at the end of the plague.

The architect was Andrea Palladio (1508-1580), who gives his name to the Palladian classical style of architecture that was so admired in 18th century England and Ireland. His work influenced the design of many grand houses.

The Chiesa del Santissimo Redentore or Church of the Most Holy Redeemer, or Il Redentore, is in the Dorsoduro sestiere in Venice. The church stands on the waterfront of the Canale della Giudecca, and dominates the skyline of the island of Giudecca. The paintings inside the church include works by Tintoretto, Paolo Veronese and Francesco Bassano.

It was built as a votive church to thank God for the deliverance of Venice from a major outbreak of the plague. Between 1575 and 1576, 46,000 people or almost a third of the population of Venice died of the plague.

The Senate of the Republic of Venice commissioned Palladio to design the church. The Senate hoped for a Church with a square plan, but Palladio designed a single nave church with three chapels on either side. 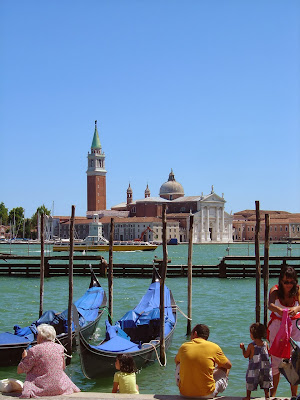 Looking across the canal at Il Redentore in Venice (Photograph: Patrick Comerford)

Il Redentore is perhaps the pinnacle of Palladio’s career. It is a large, white building with a dome crowned by a statue of Christ the Redeemer. The prominent sire on the Canale della Giudecca gave Palladio the opportunity to design a facade inspired by the Pantheon in Rome. On the façade a central triangular pediment overlies a larger, lower one. br />
Palladio’s 15 steps up to the entrance to the church are inspired by the Temple in Jerusalem. Palladio hoped that “the ascent (of the faithful) will be gradual, so that the climbing will bring more devotion.”

Some Turkish influences may be reflected in the exterior, particularly the two campaniles that resemble minarets.

The cornerstone was laid in 1577 and the church was consecrated in 1592, when it was placed in the custody of the Capuchin Friars. Today, a small number of friars still live in the monastery attached to the church.

Every year the Doge of Venice and the senators would cross a specially-built pontoon bridge from the Zattere to Giudecca to attend Mass in the church. The Festa del Redentore remains a major festival in the Venetian calendar, celebrated on the third Sunday in July, with a huge firework display.

Canaletto painted the church many times over. One well-known version of this painting was bought in the 1700s by the Copley family of Sprotborough, Yorkshire. It was accepted by the British Treasury in lieu of tax liability and was moved to Manchester in 1984. Another is in Woburn Abbey. Another English-owned version, Canaletto's Venice, a View of the Churches of Redentore and San Giacomo, is one of three old master works recently put up for sale at Sotheby’s.

Canaletto’s paintings of this church and Palladio’s design are a reminder to me this morning that in Advent Christ comes not only as the Christ Child but as our Redeemer, and in the midst of human suffering.

Tomorrow: ‘Nativity with Saint Francis and Saint Lawrence’ by Caravaggio.