A tangled family tree saw
the loss of a great house,
art collection and family titles

Russborough House, near Blessington, Co Wicklow, home to generations of the Leeson family and the Earls of Milltown (Photograph: Patrick Comerford)

I was writing yesterday about the scandals surrounding the marriage of George Townshend, 3rd Marquess Townshend, and how, without legislative parliamentary intervention, Tamworth Castle and his family titles almost passed to the illegitimate children of his estranged wife and her bigamous partner.

But in at the turn of the 19th and 20th centuries, a tangled family tree saw one of the great Irish country houses, Russborough in Co Wicklow, and its great collection of art pass out of the hands of the Leeson family, and the rightful heirs to the title of Earl of Milltown pass into obscurity.

The Leeson family fortune was made by Joseph Leeson, a Dublin brewer who owned a brewery behind his house on Saint Stephen’s Green and engaged in property speculation.

His son, Joseph Leeson (1711-1783) travelled on grand tours of Europe in 1744 and again in 1750, amassing on his travels a large art collection of paintings, sculpture, furniture, and antiques which would later furnish Russborough House, near Blessington, Co Wicklow.

None of these three brothers had any children, and the sixth earl’s widow, the former Lady Geraldine Stanhope, continued to live at Russborough until she died in 1914. While she lived on at Russborough, a series of wrangles and claims to the family titles followed, one after another. 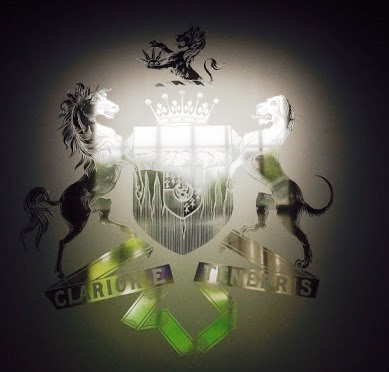 The coat-of-arms of the Earls of Milltown in frosted glass in Russborough House (Photograph: Patrick Comerford)

John Leeson, the claimant to the title of 8th Earl of Milltown in 1891, was married twice in India, and was the father of two daughters, who lived in the Punjab. For some reason, however, John Leeson never legally pursued his claims to the titles with his claim. But he had no sons, and his younger brother, Henry Corbett Leeson, had already died on 29 September 1887.

So, when John Leeson died on 25 January 1905, the claims to the Milltown title ought to have passed to his nephew, Henry Leeson’s son. However, Henry’s son was never traced in India and he remains unnamed in the family trees produced by genealogists.

Questions were raised about the validity and legality of marriages in India, and how to prove these legally. But part of the problem may have been created by a Victorian form of prejudice and racism unwilling to accept what were known as ‘Anglo-Indian’ families.

Instead, the claims to title of Earl of Milltown were assumed by John Leeson’s second cousin, Robert William Frederick Leeson (1842-1906).

This Robert Leeson was a son of the Revd Joseph Leeson (1813-1850), who was born in Dublin and became Vicar of Fishlake, Yorkshire, and Chaplain to Lord Cloncurry, and a grandson of Captain the Hon Robert Leeson (1772-1842), third son of the third Earl of Milltown.

Robert Leeson was seven when his father the vicar died. His claims were difficult to pursue because he could never prove a negative: that Henry Corbett Leeson had no legitimate male descendants who stood between him and inheriting the titles.

Robert never married, and although he had two sisters, he had no brothers to continue claiming the family titles. He died at the age of 62 on 19 June 1906 of tubercular disease after a fall while attempting to board a tramcar.

Since then, no further claimants to the Milltown titles came forward. Ye it is possible that there are many living descendants in the male line of the Hon Robert Leeson (1773-1850), who was the fourth son of the first Earl of Milltown.

His many male children and descendants included Sir William Edward Leeson (1801-1885), Genealogist of the Order of Saint Patrick. So, undoubtedly, there are probably many male descendants of the Leeson family living today who are potential or prospective claimants to the title of Earl of Milltown. The title, therefore, should be regarded as being dormant rather than extinct.

Meanwhile, the Milltown collection of art in Russborough eventually came into the hands of the National Gallery of Ireland originated from Russborough house, Blessington, Co Wicklow. Designed by Richard Castle, Russborough, was built for Joseph Leeson (1711-1783), the first Earl of Milltown, in 1763.

In 1897, the widowed Lady Milltown, still in her mid-50s, wrote to Sir Walter Armstrong, then director of the National Gallery of Ireland, to offer the Milltown collection at Russborough to the gallery in memory of her late husband. The offer was accepted and an extension, completed in 1903, was built to house the collection.

However, Lady Milltown and Armstrong argued over his attribution to Pater of works from the collection which she believed to be by Watteau. A long delay ensued before the collection was delivered to the gallery in March 1906.

Further confusion and ill-feeling were created by the number of varying schedules or inventories that were created from the initial offer that Armstrong had approved by Sir Walter Armstron, to the delivery to the gallery of a much large volume of paintings and artefacts in 1906.

Lady Milltown was not satisfied with the arrangements made by the gallery board to house the collection and corresponded with them, through her solicitors, detailing her complaints and demands for changes.

Lady Milltown was convinced the gallery had not honoured the terms of the agreement. The correspondence continued until late 1913, and the matter remained unresolved when she died on 5 January 1914.

Later that year, however, the board of the gallery approved a loan of paintings, furniture, and other works from the Milltown Collection to Sir Edmund Turton (1857-1929), a Tory MP and a nephew of the fifth, sixth and seventh earls, who was then living at Russborough House. The loan from the Milltown collection to Turton would cause much confusion in the years that followed. The Turton loan continued until 1929 when Turton’s widow contacted the gallery about the condition of some of the paintings.

It became evident that there was no exact inventory of the loan. In December 1929, Thomas Bodkin, the director of the gallery, wrote to Lady Turton: ‘I have been trying … to reconcile the scattered and somewhat formless inventories which we possess of the pictures, furniture, and other articles which the board of the National Gallery lent to your husband.’

Efforts to establish a definite inventory and to assist Lady Turton in returning some of the loan continued until 1931 when Russborough House was sold to Captain Daly. The balance of the Turton loan was finally returned by Captain Daly in 1934, with the exception of paintings by George Barrett that were to remain on loan at Russborough.

Russborough was later bought by the Beit family, the Milltown collection remained the property of the National Gallery of Ireland, and no-one came forward to secure a provable claim to the title of Earl of Milltown. 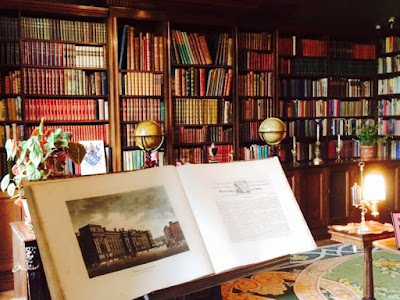 The Library in Russborough House, near Blessington, Co Wickow, with one of the three stucco ceilings in the house by the Lafranchini brothers (Photograph: Patrick Comerford)