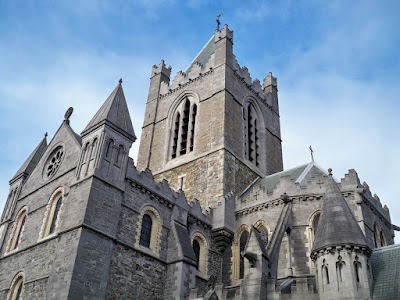 2.1, The mission of Patrick and early Irish Christianity;
2.2, Challenges facing the communion of global Anglicanism today, including the Anglican Covenant.

3.1, State-sponsored reform of the English and Irish churches in the 16th century.
3.2, Contextual understandings (1): the emergence, role and authority of The Book of Common Prayer, the Homilies, Articles of Religion.

4.1, The Elizabethan and Caroline Settlements;
4.2, Contextual understandings (2): art, music and culture in the development of Anglicanism.

* Due to the Dublin and Glendalough diocesan clergy conference, the date for these lectures may need to be rescheduled.

5.1, The Church of Ireland from the Penal Laws to Disestablishment;
5.2, Understanding sectarianism and transforming societies.

6.1, Christianity and nationalisms;
6.2, The Good Friday/Belfast Agreement and its consequences: a reflection on the Hard Gospel Project.

7.1, Partition, conflict and peace: the Church of Ireland in the 20th and 21st centuries.
7.2, Theologies of reconciliation and the challenges of divided societies (M Volf, R Schreiter, J de Gruchy).

8.1, From the Chicago-Lambeth Quadrilateral to the emergence of an Anglican Covenant;
8.2, Anglican responses to the Missio Dei: Scripture, Worship and Communion as defining themes in contemporary Anglican self-understanding.

9.1, Is it possible to speak of an Anglican ecclesiology?
9.2, Anglicanism, ecumenical engagement and inter-religious dialogue.

1, Christianity and Conflict in Ireland

● Acknowledging the conflicting interpretations of key moments in Irish church history:
● the mission of Patrick and early Irish Christianity;
● state-sponsored reform of the English and Irish churches in the 16th century;
● the Elizabethan and Caroline Settlements;
● Christianity and nationalisms;
● partition, conflict and peace;
● the Good Friday/Belfast Agreement and its consequences.

2, The ‘Anglican Way’ in Ireland

● Anglican responses to the Missio Dei: Scripture, Worship and Communion as defining themes in contemporary Anglican self-understanding;
● contextual understanding of the emergence, role and authority of The Book of Common Prayer, the Homilies, Articles of Religion;
● the Chicago-Lambeth Quadrilateral and the emergence of an Anglican Covenant;
● Anglicanism, ecumenical engagement and inter-religious dialogue.

3, Reconciliation in an Irish Context

● Analysis of Anglicanism’s capacities to contribute to public debates on reconciliation, and social and ecological justice;
● exploration of new ways for Anglicans to be church (e.g., L Mudge, R Page, M Grey);
● challenges facing the communion of global Anglicanism.

By the end of this module students will be able to:

● understand critically the historical contexts that have shaped the current expressions of Irish Christianity.
● engage with the ways in which Anglican identity is articulated, especially through the liturgical life of the Church.
● recognise the distinctive challenges facing Irish Anglicans in articulating the ‘gospel of reconciliation’.
● engage critically with concerns of Anglicans in the Global South over the nature of Anglican koinonia.
● reflect on new proposals of how to be church.

This module will be taught through a series of lectures and student-led seminars.
Students will be required to take part in and lead class seminars and also to take part in collaborative small groups and independent study.

There will be a joint seminar with each of the other two strands – Biblical Studies and Theology.

Assessment: 2,500 words of coursework (e.g. essay or project as agreed by course leader).

The reports and resolutions of the Lambeth Conferences.
The Anglican Covenant.
ARCIC agreed statements.
The Church of Ireland/Methodist Covenant.
The Hard Gospel Report.
The Porvoo Common Statement.

Drawing on the Thirty-nine Articles and The Book of Common Prayer (2004), discuss the relative influence of liturgy and doctrinal statements in the formation of an Anglican theological outlook.

Discuss Cranmer’s attitude to state control of the Church with that of the 19th century Tractarians, and relate these attitudes to the different political circumstances of their times.

Compare and contrast the Eucharistic theologies and the Ecclesiologies of Richard Hooker and Jeremy Taylor.

Outline and evaluate the current debates and divisions within the Anglican Communion, explaining in particular the relevance of Resolution 1.10 of the 1998 Lambeth Conferences.

Evaluate the contributions of missionaries, particularly from the Church of Ireland, to the expansion of Anglicanism and the development of the Anglican Communion, and assess whether their legacy has had an impact on current debates within Anglicanism.

Discuss whether the legacy of the Penal Laws and Establishment is a hindrance or a help to the present sense of identity and mission in the Church of Ireland.

Discuss whether the three Agreed Statements in the ARCIC Final Report (1982) have been successful in resolving the historic theological differences between Anglicans and Roman Catholics?

Compare the extent of the agreement reached between the Porvoo Churches with that between the Church of Ireland and the Methodist Church in Ireland in the 2001 Covenant, and outline and discuss the relevance in each case of the historic episcopate as set out in the Chicago-Lambeth Quadrilateral.

Discuss whether there is a distinctive or identifiable ‘Church of Ireland identity’ and draw on modern political and social developments to illustrate and support your evaluation.

‘The problem in Ireland today is we have had too much religion and not enough Christianity.’ Discuss this proposition, and give and defend your views about whether the ‘Hard Gospel’ report answers this type of statement.