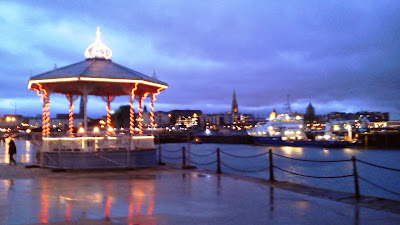 ‘The band begins at ten to six’ ... the restored Victorian bandstand on the East Pier, with Dún Laoghaire in the background late this evening (Photograph: Patrick Comerford, 2014)

I tried to blow away the cobwebs and usher in the New Year this afternoon with a walk along the East Pier in Dún Laoghaire. This is popular place for people from throughout south Dublin, who pace its length briskly enjoying the sea breeze and views.

The walk along the East Pier and back again is 2.6 km long, and is a good route for a romantic stroll or perfect therapy for getting rid of those cobwebs in your mind.

It is said about 1.3 million people walk the East Pier every year, passing the jangling masts and the elegant Victorian bandstand, which was restored to its original condition in 2010 by the Dún Laoghaire Harbour Company, on their way out to the 19th-century battery at the harbour mouth and to enjoy the view across Dublin Bay to Howth Head. 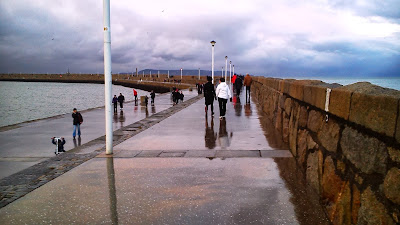 It is said about 1.3 million people walk the East Pier every year (Photograph: Patrick Comerford, 2014)

Samuel Beckett is said to have had an artistic epiphany while sitting at the end of the East Pier, and this is alluded to in his play Krapp’s Last Tape.

But I wondered this afternoon how many strollers knew, as they passed the restored Victorian bandstand, that the Victorian black circus owner Pablo Fanque performed on the pier for a week during a long engagement in Dublin in 1850, perhaps with William Kite, Henry the Horse dancing the waltz and John Henderson or Mr H undertaking “ten somersets … on solid ground.”

Pablo Fanque was immortalised by the Beatles in 1967 in their song Being for the Benefit of Mr Kite! on their album Sgt. Pepper’s Lonely Hearts Club Band.

He was born William Darby on 28 February 1796 in Norwich, and he became the first black circus proprietor in England. He was a performer in his own circus, which became the most popular circus in Victorian Britain for 30 years.

In 1843, when clergy in Burnley were criticised in the Blackburn Mercury for attending performances of Pablo Fanque’s circus, a reader responded: “Ministers of religion, of all denominations, in other towns, have attended Mr Pablo Fanque’s circus. Such is [his] character for probity and respectability, that ... I am sure that the friends of temperance and morality are deeply indebted to him for the perfectly innocent recreation which he has afforded to our population, by which I am sure hundreds have been prevented from spending their money in revelling and drunkenness.” 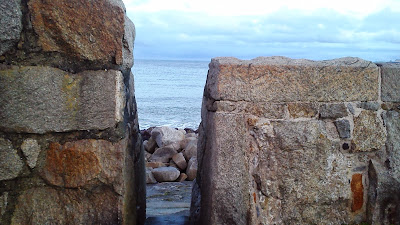 Looking out to the sea from the East Pier (Photograph: Patrick Comerford, 2014)

There was “perfectly innocent recreation” in Dun Laoghaire last night with fireworks performances to usher in the New Year. The remains of some of the fireworks were still scattered in places along the East Pier, and the lights were on in the old bandstand.

But the threatening storm deterred any would-be sailors, and apart from a few children on Christmas bicycles and scooters there were no performances and no scenes ... no somersets, no shows on trampoline, no band ready to begin at ten to six.

Along the east side of the pier, the waters were choppy, at the end of the pier black clouds were gathering to the north-west, and behind us Dún Laoghaire was lit up, still aglow with festive lights. 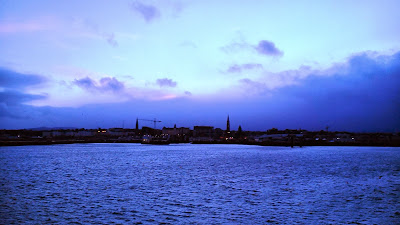 Looking back to Dún Laoghaire as darkness closes in (Photograph: Patrick Comerford, 2014)

Being for the Benefit of Mr Kite!

For the benefit of Mr Kite
There will be a show tonight on trampoline
The Hendersons will all be there
Late of Pablo Fanque’s fair, what a scene.

Over men and horses, hoops and garters
Lastly, through a hogshead of real fire
In this way Mr K will challenge the world.

The celebrated Mr K
Performs his feats on Saturday
at Bishopsgate.
The Hendersons will dance and sing
As Mr Kite flies through the ring,
don’t be late.

Messrs K and H assure the public
Their production will be second to none
And of course
Henry the Horse
dances the waltz.

The band begins at ten to six
When Mr K performs his tricks without a sound
And Mr H will demonstrate
Ten somersets he’ll undertake on solid ground.

Having been some days in preparation
A splendid time is guaranteed for all
And tonight Mr Kite is topping the bill. 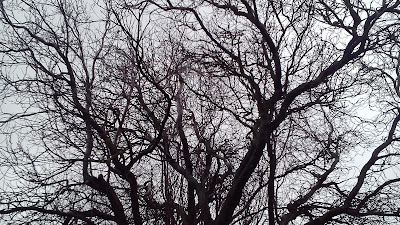 The bleak mid-winter ... trees in Knocklyon before setting out for Dún Laoghaire on New Year’s Day (Photograph: Patrick Comerford, 2014)