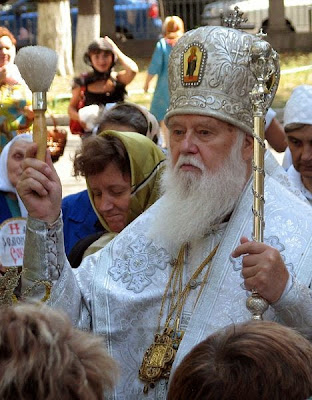 Patrick Comerford looks at the role of the Churches in the current turbulent events in Ukraine, where they have key influence but also reflect the divisions of a nation

The Crimean move for union with Russia has brought a new and more threatening dimension to the crisis in Ukraine and raises the threshold of confrontation between the West and Russia. During the protests in Kiev, colourfully-robed priests were visible on the streets, setting up prayer tents, leading prayers at protests, standing on the frontline between police and protesters and praying over dead protesters.

The most common religion in Ukraine is Orthodox Christianity. But the Orthodox churches are as divided as Ukraine, and the divisions are as complex as the history of Ukraine.

The picture is more complex when one considers the Ukrainian Greek Catholic Church (14.7 per cent). This Church sounds, looks and smells like an Orthodox Church, but is in full communion with Rome. To compound matters, two others Ukrainian Churches are in full communion with Rome: the Ruthenian Catholic Church, which also has Byzantine rites, and the Latin-rite Roman Catholic dioceses.

When Prince Vladimir the ordered the mass baptism of Kiev in the Dnieper River on 988, he establishing Christianity in what became Ukraine and Russia. After the Great Schism in 1054, most of what is present-day Ukraine aligned with the Eastern Orthodox or Byzantine Church.

The advance of the Mongol hoards pushed the centre of Russian religion and culture north and Kiev was sacked in 1240. Later, most of Ukraine was divided between Poland, Lithuania, Hungary and the Ottoman Empire.

In the late 16th century, the Bishop of Lviv turned to the Pope for protection. Other bishops followed and in 1596, under the Union of Brest-Lviv, part of the Ukrainian Church came under Papal jurisdiction as a Byzantine-rite Catholic or “Uniate” Church, known today as the Ukrainian Greek Catholic Church.

However, the majority of Ukrainians remained within Eastern Orthodoxy under the Metropolitan (Archbishop) of Kiev. In 1686, the Patriarch of Constantinople transferred their Church to the Patriarch of Moscow. When Latin-rite Catholic bishops began trying to convert “Greek Catholics” to their rites, many considered a return to Orthodoxy. At a synod in 1839, the Union of Brest-Lviv was rescinded by bishops, priests and parishes who transferred to the Russian Orthodox Church. But large numbers of “Greek Catholics” survived in Galicia within the Hapsburg Empire, and became an important cultural force in what is now western Ukraine.

During World War I, Ukraine was fought over by Austrians, Germans, Poles, Russians and Bolsheviks ... Kiev was captured by the Bolsheviks on four occasions. Under Soviet rule, the Metropolitan of Kiev was executed, churches were closed and priests were executed. A secret meeting in Kiev proclaimed a new Ukrainian Autocephalous Orthodox Church (UAOC) in 1921, and in violation of canon law the priests ordained their own bishops. But mass arrests ended almost in the liquidation of the church in 1930.

When the Red Army attacked Poland in 1939, many Ukrainian-speaking Orthodox priests welcomed the Soviet troops and restored links with the Moscow Patriarchate. When Nazi Germany occupied Ukraine, yet another Orthodox Church emerged, calling itself the Ukrainian Autonomous Orthodox Church.

The maps were redrawn after World War II and the Russian Orthodox Church gained control throughout Soviet Ukraine. The other churches feared persecution, the Greek Catholics were suspected of being Nazi collaborators, a small group of “Uniate” priests turned to Orthodoxy, and the Ukrainian Autocephalous Orthodox Church and the Ukrainian Greek Catholic Church were forced underground.

Moscow conceded autonomy to its Ukrainian Exarchate or dioceses in 1990. With the breakup of the Soviet Union in 1991, Ukraine became independent and an independent Orthodox Church was proposed. Metropolitan Filaret of Kiev, who had unsuccessfully sought to be elected Patriarch of Moscow in 1990, now demanded full independence for his church in Ukraine. He won the support of President Leonid Kravchuk, and entered a secret agreement with the tiny Ukrainian Autocephalous Orthodox Church (UAOC).

Church rivalry remains a major factor in the conflict, and has been played out in the streets of Kiev. To generalise, the church loyal to Moscow tended to support President Viktor Yanukovich until he was deposed, while the church of Metroplitan Filaret has supported the protesters and the opposition to Russian interests, and his cathedral, Saint Michael’s, was used to lay out the bodies of many dead protesters. The Ukrainian Greek Catholic Church survives mainly in West Ukraine and its priests have also been to the forefront of the demonstrations and are strongly anti-Russian.

Protestants are a small minority in Ukraine and include Baptists and German-speaking Lutherans.

Christ Church, the Anglican Church in Kiev, has no priest at present but since 1999 has become a welcoming and thriving church, with an international membership. It uses a Lutheran Church, where the first floor was a First Aid post for both police and protesters. Alla Gedz of Christ Church says the leadership has remained neutral about the political position in Ukraine, and she says: “To understand Ukrainians, people either have to be born with a Ukrainian heart and know the history or to serve this nation.”

Canon Patrick Comerford is Lecturer in Anglicanism and Liturgy in the Church of Ireland Theological Institute, Adjunct Assistant Professor in the University of Dublin and a member of the Chapter of Christ Church Cathedral, Dublin.

This full-page feature was published in the Church of Ireland Gazette, p 9, on Friday 28 March 2014

Posted by Patrick Comerford at 21:00