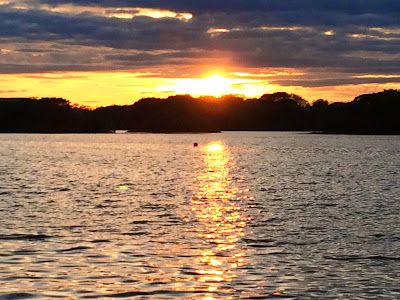 I stayed last night on the shores of Lough Ramor in the Lakeside Manor Hotel, on the southern edges of Virginia, Co Cavan.

Four of us had stopped on our way at Kells to visit Saint Columba’s Church of Ireland parish church and the site of the Columban monastery. Kells is planning celebrations next weekend to mark the 1,200th anniversary of the refounding of the monastery, which traces its story back to Saint Columba or Saint Colmcille in the sixth century.

We visited the high tower and the many high crosses that survive in the churchyard, and the attached tower built by the Taylour family, Earls of Bective, who lived nearby in Headfort House.

Later in the afternoon, we spent some time walking around Virginia, a pretty town that once was a regular winner in the ‘Tidy Towns Competition,’ and that also owed its Victorian-era growth and prosperity to the patronage of the Earls of Bective and Marquises of Headfort, who built a hunting lodge at what is now the Park Hotel, and who also richly endowed the local Church of Ireland parish church. 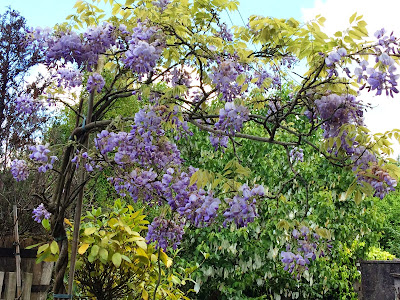 Pergola Nurseries were founded in 1986 and the garden centre stretches across a four-acre site. Until now, I have to admit, I have had no interest at all in garden centres. They seemed like a bad way to make a sunny afternoon boring. But my mind has been changed, and I’m now thinking of buying wisteria to replace the creeping ivy on the fence in the back garden. 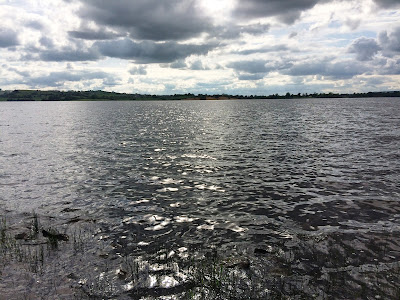 An afternoon walk on the shores Lough Ramor at the Lakside Manor Hotel in Virginia (Photograph: Patrick Comerford, 2014)
The Lakeside Manor Hotel is in a picturesque location on the lakeshore. By the time we arrived in the late afternoon, the skies had become a little grey and overcast, and there were few boats on the water. But three of us still took a short stroll along the side of the lake, enjoying the reflections on the water from the little amount of sun still breaking through the clouds.

As the sun returned, four of us made the best of the late afternoon, and sat for an hour or so, sipping white wine and enjoying the view, before getting ready for dinner. 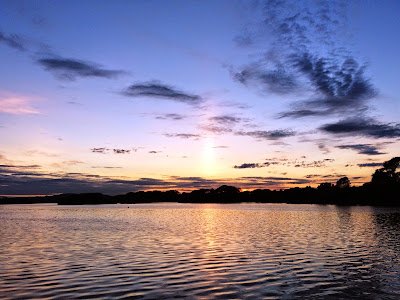 Enjoying the sunset on Lough Ramor at the Lakside Manor Hotel in Virginia (Photograph: Patrick Comerford, 2014)

It could have been a very relaxed evening, but the sunset interrupted dinner. The setting sun was casting orange and purple streaks across the evening skies that reflected in the ripples on the waters of the lake.

Time and again, each of us left the table to capture the setting sun in photographs. 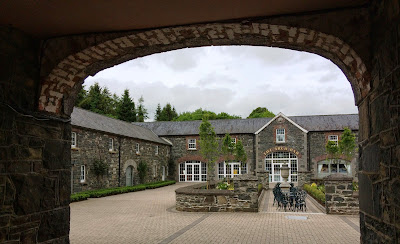 Bective Court behind the Park Hotel in Virginia, Co Cavan ... I spent a summer holiday here in 1967 (Photograph: Patrick Comerford, 2014)

This morning, we went to church in Virginia, where the Eucharist was celebrated by the rector, the Ven Craig McCauley, who is Archdeacon of Kilmore. While he was an ordinand, Craig was placed as a student in Saint Maelruain’s Parish in Tallaght, where I was a reader in the 1990s.

After church, we strolled through the grounds of the Park Hotel and the courtyard at the rear. I still have happy memories of a long, sunny summer holiday here as a teenager in 1967, climbing trees in the driveway to find solitude and to read The Irish Times on my own in the mornings, and learning to row on the lake in the afternoons.

From Virginia, we drove through Ballyjamesduff and Oldcastle to Loughcrew, Co Meath, which is the site of megalithic burial grounds dating back to approximately 3500 and 3300 BC. This is one of the four main passage tomb sites in Ireland, and the passage tombs here are aligned with the Equinox sunrise. 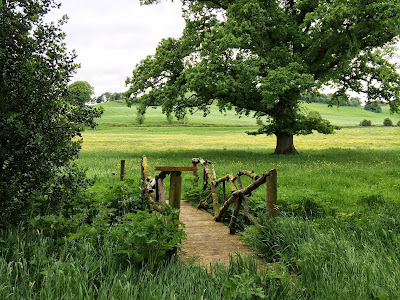 A footbridge in the grounds of Loughcrew, Co Meath (Photograph: Patrick Comerford, 2014)
Lunch in the coffee shop in a log-built reception lodge was disappointing, and the service and attention were poor and slow. But we enjoyed strolling through the gardens, the grounds and the walks. 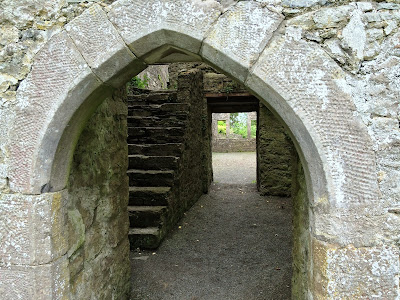 Inside the ruined Plunkett chapel in the grounds of Loughcrew, Co Cavan (Photograph: Patrick Comerford, 2014)
The Plunketts sided with the Irish Confederates in the 1640s and lost their lands with the Cromwellian confiscations in 1652. Their estate passed from Sir William Petty to his brother-in-law, William Naper, around 1655. The Naper family developed an extensive estate of some 180,000 acres (730 sq km). The 1798 rebel Naper Tandy claimed descent from this family.

In 1821, William Naper commissioned the English neo-classical architect Charles Robert Cockerell (1788-1863) to build a new stately home at Loughcrew. Cockerell had recently visited Greece and he spent eight years and £22,000 (£1.5 million in today’s values) on building a vast, classical-style house with an Ionic portico.

He later designed the Hanover Chapel on Regent Street, London, the Cambridge University Library and the Ashmolean Museum, Oxford.

The house was destroyed over the next 140 years by a succession of devastating fires, the last of them in 1964. A new house was built in the surviving but roofless Orangery incorporating the palm houses, the azalea houses and the furnace rooms. Today, all that survives of Cockerell’s Loughcrew House is the original portico, standing in solemn, solitary isolation amid the fields and gardens, reassembled like a mini-Acropolis.

The house sits on 200 acres of parkland and within a valley below Loughcrew. Charles and Emily Naper open the restored gardens to the public throughout the summer months and run an annual outdoor garden opera festival and an annual Jazz Festival.

Posted by Patrick Comerford at 22:04